This build log is to compliment my in-box review.

I have used the kit drive sprockets and idler wheels, but am using the Warriors damaged road wheels. They aren't particularly more-detailed than the kit ones, nor is wear & tear on rubber wheels hard to do with any Xacto knife, but I picked the set up cheap from another member and just wanted to use them here. I plan to make this baby well-worn and used.

The kit comes with an average two-piece barrel, so my first choice was to #$%^-can that in favor of an Armorscale one. Had I known about JB Models, I would've used theirs instead, but that's another story, LOL! 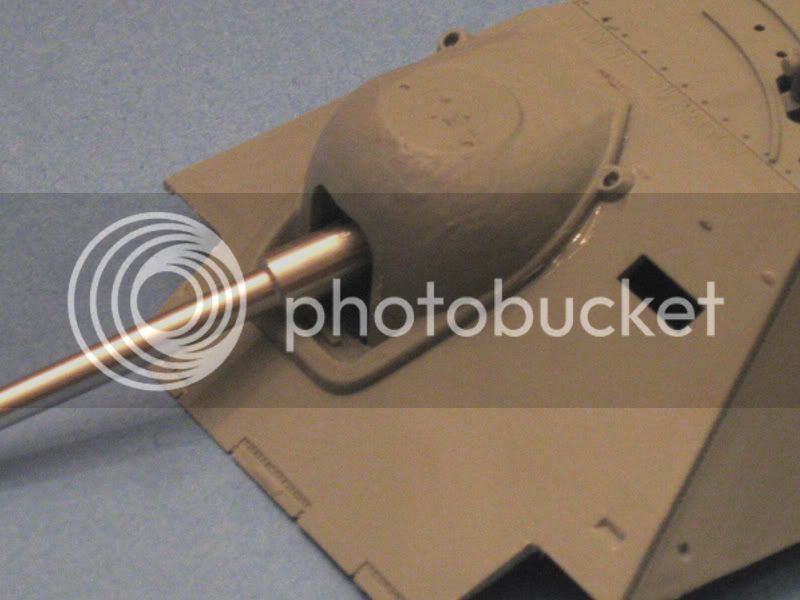 The Aber sheet of PE has some excellent touches, including these very well-rendered front mud guards:

In general, the kit goes together quite well, and I have few complaints about fit, etc. There are a few uncharacteristic (for DML) knock-out holes that required filling, including the front tow hook arms.

REPLY & QUOTE
PanzerMike (Mike C) said
Looking great so far , recently brought two of these kits and im glad to hear they dont have any fit issues. Looking foward to seeing this one complete.

REPLY & QUOTE
On the bench

REPLY & QUOTE
Sturmgiest (Dean Raines) said
Hi Bill,looking great so far,thats a lot of AM your throwing at this one.Very nice!

REPLY & QUOTE
The best cure I know ,is to build a Panther!

Thats a lot of AM your throwing at this one.

You're right, Deano. The kit comes with individual tracks, but they're attached to the sprues, so a LOT of clean-up right there. Might as well go for Friuls, though the set cost me more than the kit, LOL! The barrel, again, is a no-brainer for me. I just feel better with an aluminum barrel, no "truing" problems or clean-up.

The PE really makes this kit IMO. Lots of detailing that just isn't there with the kit. You get a small sheet of steel PE which is hard to work with.

And I owe a debt to Bill Plunk for arranging all the extra stuff in front of the kit. He taught me to identify what I use.

REPLY & QUOTE
bill_c (Bill Cross) said
Here is the next step: adding the superstructure to the body and including the rear fenders. I chewed them up a bit with a set of flat pliers (no serrated edges).

The PE allows for adding the extra track links. I haven't finished putting the Friul strings together yet, so I'm holding off on adding any more extra tracks.

REPLY & QUOTE
wbill76 (Bill Plunk) said
Off to a great start Bill! I've got this same kit in the stash but haven't amassed much in the way of AM stuff for it yet. Will be following this one with interest.

REPLY & QUOTE
bill_c (Bill Cross) said
Thanks, il mio maestro. You set the standard for build logs, and I'm flattered to have you dropping by.

Thats a lot of AM your throwing at this one.

You're right, Deano. The kit comes with individual tracks, but they're attached to the sprues, so a LOT of clean-up right there. Might as well go for Friuls, though the set cost me more than the kit, LOL! The barrel, again, is a no-brainer for me. I just feel better with an aluminum barrel, no "truing" problems or clean-up.

The PE really makes this kit IMO. Lots of detailing that just isn't there with the kit. You get a small sheet of steel PE which is hard to work with.

And I owe a debt to Bill Plunk for arranging all the extra stuff in front of the kit. He taught me
identify what I use.


Yup looking great already for it!

REPLY & QUOTE
The best cure I know ,is to build a Panther!

REPLY & QUOTE
bill_c (Bill Cross) said
Here are some more photos showing the application of the PE. Without it, this kit is boring and lifeless, but the detailing really brings it to life. The tool box is a nice touch IMO: 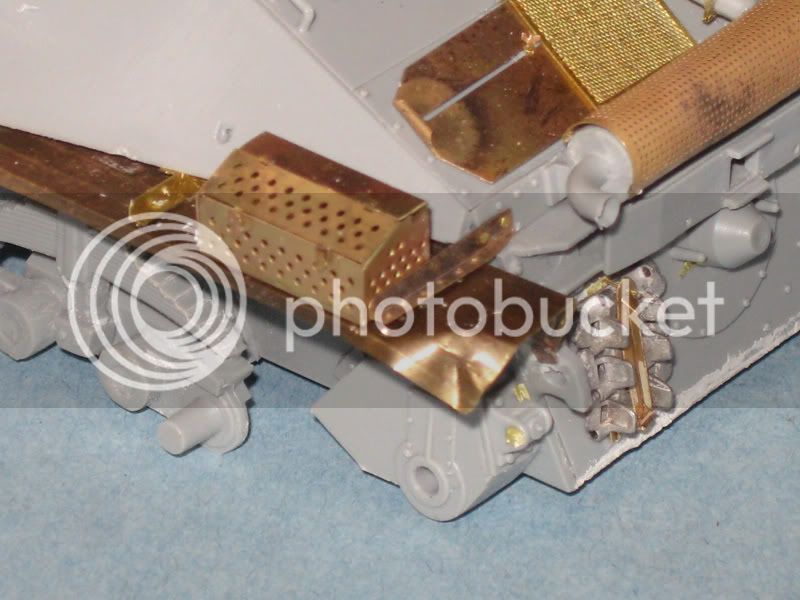 The "carpet monster" ate this metal backing plate to the MG periscope, so I scratched it:

Speaking of the MG:

I did think about adding an AM PE MG but can't find one that suits my tastes. There are many turned brass barrels, but mostly they are intended for ball-mount MGs, not fully-exposed ones, so adding a nice barrel to this limited detailed-MG would look assinine IMO. Purchasing a full AM MG crossed my mind, but they're probably as expensive as the base kit (ABER's own 35L070 is almost $21 at LuckyModel and not even in-stock, so its price might be much higher by now).

More grab handles. The plastic ones supplied with the kit were out-of-scale, so these are brass wire. Still a bit big for my tastes, but smaller diameter wire is so very hard to work with, even when using a wire bending device:

The gunner's hatches are from the kit, but improved with ABER hinges:

One of the details that separates the Early from the Mid- to Late-Hetzer is the exhaust system. The early one is an L-shaped contrivance that runs down the back of the vehicle to the muffler, which has a heat exchanger cover:

The kit-supplied jack is awful, but ABER doesn't make it easier by asking you to rework parts that barely have any definition to begin with. It's my one gribe with ABER PE sets, where the most-dreaded word in the instruction sheet is the Polish drut ("wire"). ABER usually specifies a metric wire diameter when most wire in the US is sold in gauges.

Here is the overall effect:

REPLY & QUOTE
bill_c (Bill Cross) said
Here is some more detailing, including the wire running from the Notek light to an octagonal node (the octagon shape is a nice touch by ABER):

I plan on weathering and beating up the vehicle extensively, so here the Schurtzen side armor mounting rack is damaged on the right:

Despite having some airbrush problems, I've gone ahead with painting, in this case doing to red oxide primer by hand for the damaged road wheels:

REPLY & QUOTE
JimF (Jim Fredd) said
Very interesting build you have here, looking forward to seeing it in it warpaint

REPLY & QUOTE
The impractical we ignore right away, the impossible we bill by the hour...

REPLY & QUOTE
Pat
work to become not to acquire

One thing however - most Hetzer MG34's had the stock removed as it restricted access to / from the crew hatch. Some machines may have left the stock on but most had it removed.

Look at wartime photos and you will see what I mean.

A minor issue and great progress to date. Look forward to seeing this project come together.

REPLY & QUOTE
wbill76 (Bill Plunk) said
Making good progress with this one Bill, coming nicely with the Aber set for sure.

REPLY & QUOTE
PantherF (Jeff T. Stringer) said
WOW. My eyes are hurting and all I did was look at the pictures! Nice work with the PE.

REPLY & QUOTE
scratchmod (rob ferreira) said
Wow some serious brass on that Hetzer. A shame to put paint on it. A nice clean build Bill, I look forward to seeing it painted and weathered.

REPLY & QUOTE
bill_c (Bill Cross) said
Thanks, everyone, there's nothing like positive reinforcement from my peers and mentors.

... looking forward to seeing it in it warpaint

Well, here the nasty little $#@%er is prior to weathering:

First, the tracks. I weathered them with Blacken-It, then applied various rust pigments with fixer. When finished, I scraped the track bottoms with a wire brush and the weathering came right off. To make the results "pop" more, I used Vallejo "dirty silver" as a dry-brushed addition.

The green-dunkelgelb combo is a standard Hetzer camo pattern according to Richard Craig, who was kind enough to send me a series of camo schemes. I saw several Hetzers with the Balkankreuz and red with white outlined numbers, so decided in favor of that scheme:

I also took the suggestion about removing the MG34's wooden stock.

The next step is the weathering.

REPLY & QUOTE
IMMORTALITY! take it it's yours - Achilles siege of Troy.

REPLY & QUOTE
biffa (Ron Goins) said
Coming along great Bill that is a ton of detail you have added and it looks very nice the camo looks cool and with some weathering this one will really shine.

Especially the most accurately elaborated PEs - all these tiny bolts ann rivets...as well as the carefully assembled clamps.

Obviously much, much work you have put into this Hetzer.

The biggest and difficult part has been mastered.

REPLY & QUOTE
Plasticbattle (Frank Glackin) said
Looking good Bill. I like the camo and the beaten up parts. The tracks seem to be sitting wonky at the rear ... see third last image!
Have this kit myself and some AM for it including 2 Verlinden interior sets. Someday maybe!!

The tracks seem to be sitting wonky at the rear ... see third last image!

Yeah, there is something going on there, I am looking at what might cause it. The track tensioning has the wheels extended the full length.

Have this kit myself and some AM for it including 2 Verlinden interior sets.

The ABER set allows for hatch details, so a figure or two is quite easy to include. Alternately, I wish more manufacturers would include engine compartments, since that's a natural non-battle dio possibility. With the ABER sets (fenders + PE), damaged road wheels, barrel and Friul tracks, I already had enough swag sunk in this one. Any more AM would have made it too much for my tastes.

I hope my build log will inspire some of you to improve on what I've done.