Constructive Feedback
For in-progress or completed build photos. Give and get contructive feedback!
Hosted by Darren Baker, Dave O'Meara
dragon wagon with jagdtiger

REPLY & QUOTE
neil22 (neil mcconnell) said
hi everyone.
here is the latest project i have been working on. the m26 dragon wagon carrying a german jagdtiger.
in the pictures i have just sat an old build of the M26 there for the pic, i have not built the one to go with it yet. the trailer is built totaly and in primer ready for painting. and the jagdtiger is painted and had the first filters put on, jsut waiting for the decals then some washes and pigments. 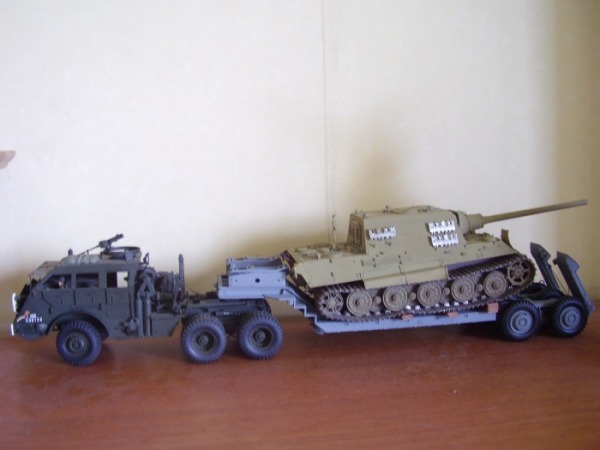 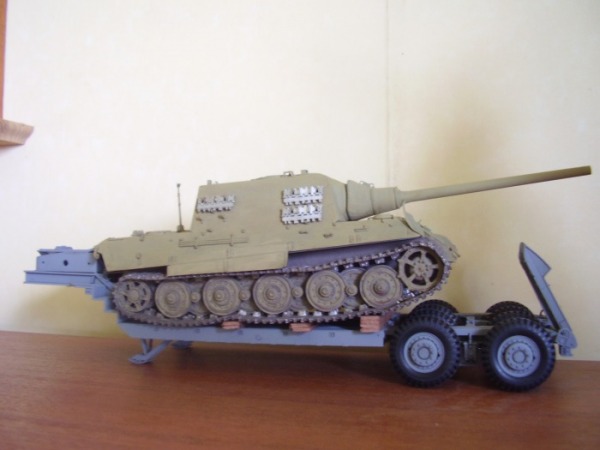 oh and just like to thank luckymodels for the dragon wagon, brilliant quick service and half to cost of the kit here in france, even with postage!

REPLY & QUOTE
CMOT (Darren Baker) said
Neil this looks to be coming along nicely, however I believe the JagdTiger is far to heavy for the trailer. I await to be corrected.

i was waiting for someone to say that....... yeah it was far to heavy. the trailer was designed for around 40tons...... and the jagdtiger waighed in at close to 70tons!!!!

the jagdtiger is number 331, i belive this is the one now in the USA. at the proving grounds.

however, i i found this photo on a forum and well, i thought it would make a great diorama! 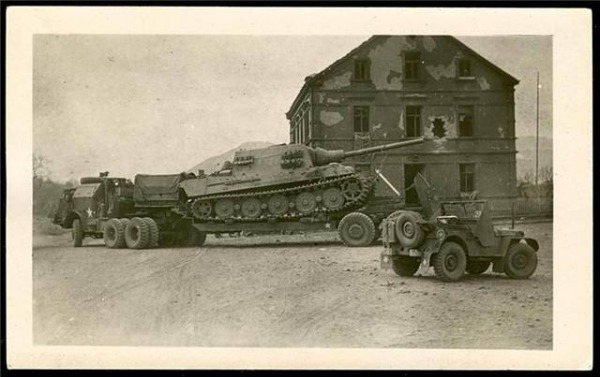 REPLY & QUOTE
CMOT (Darren Baker) said
Like I said Neil "I await to be proved wrong".

REPLY & QUOTE
PvtMutt (Tony) said
Man that would be a load but he ain't heavy he's my brother.

What a great idea and a neat model combination. I agree with you that this is Jadgtiger 331 which was brought back to the US and currently resides at Aberdeen Proving Grounds in Maryland.

I am not sure how accurate you are wanting to be and I am not criticising nor detracting in any way from your excellent work but Jadgtiger 331 was painted in a three tone ambush scheme.
Unfortunately this seemingly excellent photo is so washed out that it appears to be overall Dunkelgelb. I to thought the same thing and set about confirming it was actually 331. It's identity can be confirmed by the large caliber shell gouge on the lower part of the gun manlet just behind the barrel.

I have an excellent picture of 331 just after it's arrival in the US. It is sitting on 100 ton trailer with all tools and tracks removed finished in a hard edge ambush scheme.

Enhancing the photos suggest 331 was most problably finished in overall Oluvgrun with Dunkelgelb and Rotbraun added along with the small corresponding spots of color that make this scheme unique .

I can send you the both the standard and enhance photos so you can see what I am talking about. There is a color photo of 331 taken at Aberdeen in the early 1950s which supposedly show it painted in its original ambush scheme but it has since been learned that around 1950 these vehicles were repainted and a comparison of the original arrival photo and the color one shows a completely diffrerent pattern with red brown being the dominant color. This color photo led many to believe that 331 was actually painted in a base coat red oxide but that is not the case.

Sorry for rambling but I just thought you would like to know.

REPLY & QUOTE
Character is what you do when no one is looking.
Few things are harder to put up with than a good example.- Mark Twain
Make yourself an honest man, and then you may be sure that there is one less scoundrel in the world.--Thomas Carlyle

REPLY & QUOTE
liberator (ed s. sarao) said
hi everyone and hi neil, very nice project...i'll check your thread from time to time. the jeep looks interesting..would you include this on your project? thanks for sharing. ed

REPLY & QUOTE
Some people spend an entire lifetime wondering if they made a difference in the world. But, the Marines don't have that problem.