@ Jesper: your Matchbox also looks great, I must say that I do not really notice the lack of detail you mentioned due to to your fine paint job. I once built a 1:35 full resin tank transporter (Tatra) for the soft skinned campaign which is kind of a rip off from the M-19 and the details on that kit were less than on your Matchbox kit.


"We don't know anything about their race, history, or culture, but one thing's for sure. They stand for everything we stand against."

PHOTOS
SGTJKJ (Jesper) said
Thanks for the kind words, Mat. Much appreciated.

Compared to its age and scale it is a fine kit - and fun to build. 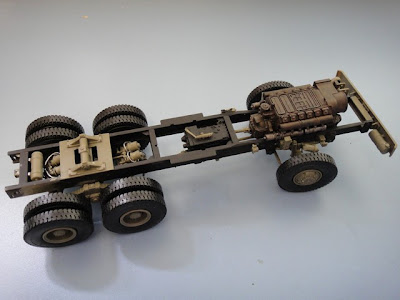 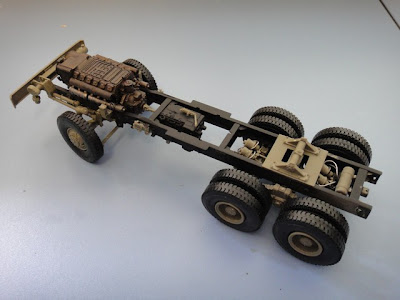 looking really nice. I was wondering, are this all normal kit parts? I ask because it looks pretty well detailed for an "older" Trumpeter kit. I think this one might make its way to my wish list

"We don't know anything about their race, history, or culture, but one thing's for sure. They stand for everything we stand against."

Needs some filters, some scratches and some dust...


Please visit me at my blog: https://butterfingeredmodelbuilder.wordpress.com/

WWW
Ruffus (Byron Leal Garza) said
So? is this campaign over?

So? is this campaign over?

I pulled this down and put it on the bench last night.. I kept putting it off because I really wanted to finish my hanger queen build.

anyways, I think there is still time left for my Not-Fighting Vehicle.

Its kind of an oddball in my collection as its something I received from a family member, even thought I don't build 1/72 scale aircraft, or even modern aircraft. LOL. So this will be a good use for it.

PHOTOS
Nito74 (John Pereira) said
Nice choice Delbert !
I had that set.. don't know where it is these days..

I hoped to get on board on this one but too many Campaigns lately so I had to decline this one.
I was planning on doing a BergeTiger (P) from Dragon. It will remain on my stash.

PHOTOS
madmax5510 (dani) said
Hi to all!
This is my contribution for this campaign,an 1/72 Attak kit,a small Tatra T-57 Kubelwagen:

Had a productive night and got some building in.. nothing special just a basic quick build.

There is the Ford Tractor, followed by the ammo trailer and a General Purpose Dolly.

The Lift truck is in the center front and the far right is a Drop Tank dolly and the left front item is a Hydraulic Lift trailer.

Parts ready to go. Did lots of dryfitting to make sure everything fits and ended up drilling out a lot of the predrilled holes. While the bike does not have a lot of parts, it does take some thinking up front as all you get in the instructions is one exploded view. Some parts need to go in a certain order for it all to fit together.

The wheels are four parts each (axle, two sets of PE spokes, and the tire). While the Tristar set has a template to bend the spokes, I followed the Hornet instructions, which has you use the tire:

2. Use rounded object (in this case the back of a pen) to bend the PE

4. Just pop the piece out, reverse it, glue in the axle, and add the other spokes. This worked surprisingly well.

PHOTOS
dutchboyinohio (Mark van 't Hooft) said
Just need to add some cables and then paint! This has been a fun build so far...

WWW
endrju007 (Andrzej Snigorski) said
OK, who needs extension?
I know I do...

Honestly speaking I'm not going to extend it just for myself because I have no idea how long it is going to take to finish my project...
I have to wait for another "Finish it Campaign"....

PHOTOS
dutchboyinohio (Mark van 't Hooft) said
I could use a few extra days, so the paint on my welbike will actually be dry for the final pictures 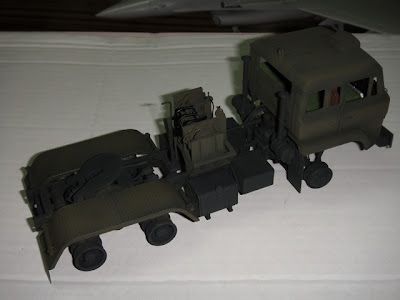 WWW
Delbert (Delbert) said
I've got mine finished, but i'm having a terrible time taking a good photo.. here is my latest attempt..

and don't laugh this was a "quick build" and I left my comfort zone of MM enamals and used some tamiya acrylics.. now I remember why I prefer the MM paints. LOL

Hasegawa Aircraft loading set.. (I don't build 1/72 aircraft so I have no missles or bombs to put on the trailers and dollies.. )

I'll have to wait for a sunny day to try outside, for tiny stuff like this that seems to work best..

WWW
endrju007 (Andrzej Snigorski) said
@ Lap Man and Mark v - you have unnofficial extension (I don't want to bother local authorities aka Gary Kato with official extension) - please PM me as soon as you upload picture of finished model into gallery.

@ALL
Thank you very much for participating in this campaign. There were some interesting builds here.
Unfortunately health and family conditions did not allow me to give as much time and attention as I wanted. Also my BR52 as advenced in progress as it is is far from being finished.
So, thanks again for participating. Here is list of people who finished the campaign and earned a ribbon (Lap Man, Mark v, I'm waiting for your entries, so don't worry).

If you've built your model and don't see yourself on the list punch me via PM.

and for running the campaign. Too bad that you didn't get your BR 52 finished but if I remember correctly from your last update you didn't get very far with it. So I think you should join my Military railroad Campaign and use that as your entry

Thanks for a fun campaign! See ya in the next one...

WWW
endrju007 (Andrzej Snigorski) said
Sal, if it's OK to join your campaign with BR-52 in condition in which it is in the moment (you've seen it...), than I am only too happy to do so! Thanks for invitation!

Tom - not much running from my side unfortunately... Family life sure is time consuming

. I'm happy you had good time.

PHOTOS
emroglan (Emre Efli) said
Andrzej, thank you for hosting this campaign and getting ideas from me. It was a very fun build for me... I bet no one could have more fun than me while building my Hello Kitty AFV