REPLY & QUOTE
long_tom (Tom Radigan) said
I have a Vision Models BA-64B kit ready to build and wanted it to make it a Korean War version. Unfortunately the only picture I was able to find was the remarked US captured version. How was a typical BA-64 marked by the North Korean military? Thanks.

REPLY & QUOTE
retiredyank (Matthew Nethery) said
Google is your friend. I found several pictures of the BA-64B. They are in b&w, but show the markings for it. There are also some cgi photos that the markings show up more clearly in.

Unfortunately the only picture I was able to find was the remarked US captured version.

This is how it looked before it received its new owners markings : 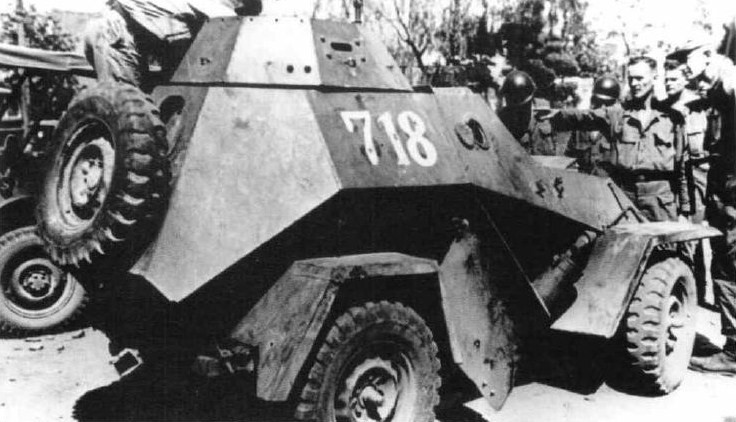 The number was white

I haven't seen those interesting pics yet

These BA-64s were accompanied by what definitely looks like a M72 sidecar motorcycle :

from this photo album :
http://www.surfacezero.com/g503/showgallery.php?ppuser=562&username=escort

REPLY & QUOTE
Grumpyoldman (Dave O'Meara ) said
Thanks Frenchy, my next question was going to be "anyone know what motorcycle was ahead of the BA-64?"

REPLY & QUOTE
Character is what you do when no one is looking.
Few things are harder to put up with than a good example.- Mark Twain
Make yourself an honest man, and then you may be sure that there is one less scoundrel in the world.--Thomas Carlyle

REPLY & QUOTE
long_tom (Tom Radigan) said
Another question: would it have the black or green chassis and wheels? The trucks I know had the black chassis.

REPLY & QUOTE
Dangeroo (Stefan Halter) said
Tom, sorry to budge in, as I have nothing to add to the subject... But I just wanted to tell you that we have a Korean War Campaign going on here and we're kind off short on Armored Cars...

There are all kinds of people there who are currently dealiung with the Korean war too.

So it you cared to join us, you can sign up via the link in my signature and the thread is here.

REPLY & QUOTE
Too many models - too little time...

REPLY & QUOTE
long_tom (Tom Radigan) said
One little problem with dealing with the Korean War is, does anyone make Korean soldier figures? It's nice that Dragon makes some Chinese ones though.

REPLY & QUOTE
vonHengest (Jeremy Hengest) said
You could always make the BA-64B for the campaign, then find or convert some figures later. Just a thought

One little problem with dealing with the Korean War is, does anyone make Korean soldier figures? It's nice that Dragon makes some Chinese ones though.

Unfortunatelly, apart from the chinese volunteers from Dragon, there aren't any styrene figures available for the Korean War.
You can scratch build them, by using the torso, legs and hands, the helmets, the weapons and the gear, from WWII Russian Figures, and the heads from Japanese WWII figures...

REPLY & QUOTE
Whiskey_1 (Benjamin de Groot) said
There are some Lincoln County Line figures out there (resin), but I have no idea about quality and whether or not they are still available.

REPLY & QUOTE
Whereas to an englishman the taking of a sledgehammer to crack a nut is a wrong decision and a sign of mental immaturity, to a russian the opposite is the case. In russian eyes the cracking of nuts is clearly what sledgehammers are for.
- Peter H. Vigor