PHOTOS
WARDUKWNZ (Phill) said
Hey guys .. got this idea for a campaign ,, now we all know about the strange machines the military have made over the years . what i'm thinking is a campaign which covers prototypes or just plain mad ideas that inventors have come up with over time for the military , anything with tracks or wheels , there's plenty out there for us to build and the choices would be pretty endless .
Thinking a year for the campaign dew to the fact there could be some pretty serious scratch building going on .
So tell me what ya think .

PHOTOS
mmeier (MBR) said
Oh, the stuff from the Bundeswehr alone will fill a few pages:

+ A Trike with a 20mm AA gun in the back
+ A 90mm AT gun with an engine similar to the FH70
+ A prototype Trike for the Paras (competing with the KraKa)
+ The Panther AT platform
...


Free men are their own masters. If you are not - you are a slave.

WWW
windysean (Sean Hadfield) said
An ingenious proposal! I would love to be in a campaign like that.
Only thing is, nothing comes to mind. Modern mine-resistant V-hulled vehicles are normal now. I've always wanted to build a Zamboni prototype based on a jeep, but that's surplus, not military necessarily.
I'll have to kick around some ideas and watch here for more fuel to the fire!
thanks, Phill!
-Sean H.

WWW
windysean (Sean Hadfield) said
Ha! My first idea... a vis-mod (visually modified) HMMWV made to look like a BRDM for training purposes! 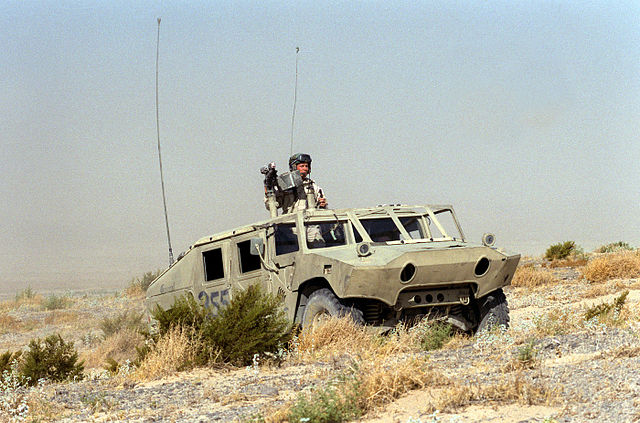 PHOTOS
ltb073 (Sal) said
Hey Phill would a Landwasserschlepper qualify as a strange military vehicle. That the only strange thing that I have in the stash right now and it don't look like the Iron Ducks proposal is going anywhere. If not I'll have to get my thinking cap on as well

All,
I'd definately be in with this one - has my two favorite areas:
scratchbuilding and quirky machines.
Oh so many choices of what to do - my little brain is already in hyperdrive thinking of all these weird and wonderful machines

"THE BEST THINGS IN LIFE ARE SELF MADE"
Sua Tela Tonanti

PHOTOS
PantherF (Jeff T. Stringer) said
Hmmmm, might be interested. It all depends (start, duration, rules/restrictions) and then I could pick up a new kit or just bash one to heck and back!

Haven't done that in a while.

PHOTOS
WARDUKWNZ (Phill) said
Hey guys ,, Damn i'm surprised to see this many reply's lol MBR,, your not wrong and not only the late or modern German military stuff .what about WW2 , everybody designed strange machines then too.
Sean ,,, mate that VISMOD will work here very nicely, its not even close to the norm that thing

Sal ,, yup the Landwasserschlepper will work here too .. again its not run of the mill ,so thats a yes dude.
Roger ,, lol ya same here ..mind is going into over drive thinking of ideas and i already have 4

. but remember prototypes are in too .
Ok Jeff mate this is what i'm think in the way of rules for now anyway .
1,Only weird,strange and prototypes allowed . no whatifs at all
2,Any time period is also allowed.
3,Campaign run time ..one year
4,Scales from 1/72 to 1/16th
The rest of the rules are the normal ones for a campaign . ya know one pic and the like .
Vance ,, ya i was thinking the same about the time ..6 months ain't anywhere long enough for this sort of campaign so one year should do nicely .

PHOTOS
SGTJKJ (Jesper) said
I am in.

PHOTOS
PantherF (Jeff T. Stringer) said
"Only weird,strange and prototypes allowed . no whatifs at all"

So, documented proof? A picture or literature?

PHOTOS
pod3105 (Paul Hennessy) said
Comet hull with Wombat RCL in place of the turret tried out by the Irish army in 70's comes to mind.
Roy Kinsella are you reading this...?

PHOTOS
WARDUKWNZ (Phill) said
Jeff ,, now you mention it yes ,,a picture would be needed to prove its real ,, thinking of how many pics i found this morning of strange military machines pics shouldn't be a problem .
If a pic is a problem then something official like an old document saying something about the design would be allowed .
Phill

Sal ,, yup the Landwasserschlepper will work here too .. again its not run of the mill ,so thats a yes dude.

Hey Phill ya didnt count me in there thats 6

WWW
windysean (Sean Hadfield) said
I affirm that I am in! (Especially since it runs past December 31st, when almost all my other campaign commitments end.)

)
Free men are their own masters. If you are not - you are a slave.

PHOTOS
arpikaszabo (Arpad Szabo) said
Impulz 2M or TOS-1 from me, sign me up

PHOTOS
PantherF (Jeff T. Stringer) said
I'm confirming, I'm in! This is going to be one to remember!

WWW
windysean (Sean Hadfield) said
Poking around the internet, I found this, that I like even better! (found on a Hemmings Motor News blog)

This might be the one I go with! (Unless I get another better idea closer to the time I actually pick up my tools and begin.

PHOTOS
WARDUKWNZ (Phill) said
Righto then the numbers so far
Roger ,,casper
Sean H,,windysean
Jesper,,SGTJKJ
Jeff,,PantherF
Phill,,WARDUKWNZ
MBR,,mmeier
Sal,,ltb073
Arpad,,arpikaszabo
Thats 8 guys ,,2 more and we should be good to go which would be brilliant , what i have in mind ain't all that amazing but to me its pretty damn cool

Sean ,, now that's a jeep with all weather roofing

would quite a cool one to build and not all that easy .

,
My poor little brain is working overtime (ya can probably smell the burning wires from your place

), the lounge floor looks like a library has exploded and the printer is working overtime while I sort through and scale various plans and do a feasiblity list - down to the Top 50

.
One that keeps bouncing back into my noggon is this slightly mundane little creature:

"THE BEST THINGS IN LIFE ARE SELF MADE"
Sua Tela Tonanti

PHOTOS
WARDUKWNZ (Phill) said
Roger mate all i have is one question for ya ,, what the hell is that for ???
Some sort of offroad test bed possibly but either way .. perfect for this