Thanks, it was a lot of fun to build, one of DML's better kits. The casting texture is very good but that DS track never fits.

PHOTOS
1721Lancers (Paul Badman) said
Hi Irvin,
thanks for the info, you just saved me some money

thats one resin set that I won't get, not yet anyway


"Lord Raglan wishes the cavalry to advance rapidly to the front, follow the enemy & try to prevent the enemy carrying away the guns. Troop horse artillery may accompany. French cavalry is on your left. Immediate. R Airey."

It was a fun build and hope there is another Sherman campaign soon!

PHOTOS
iakarch (Irvin A. Kohler, A.I.A.) said
Smash, its works better if you do the yellow first, mask it, then do the OD. Yellow is a very thin color almost transparent, it would take alot to cover the OD hence the bleed through.

Paul, as far as I know I have never seen sandbag armour on any british tanks, I think it was a strictly American practice and against orders. The boggies couldn't take the added weight and it wasnt very effective. I have seen a picture of Geo. Patton balling out a crew for having sandbag armour.

PHOTOS
1721Lancers (Paul Badman) said
Hi there,
before this thread disappears I have one last question to the Sherman experts out there :-

Was there a sandbag armoured Firefly?


"Lord Raglan wishes the cavalry to advance rapidly to the front, follow the enemy & try to prevent the enemy carrying away the guns. Troop horse artillery may accompany. French cavalry is on your left. Immediate. R Airey."

WWW
LtSmash (Lt Smash) said
Like many U.S. Army Shermans, this tanks paint job is simply olive drab. To add variation to the one-color paint scheme, I decided to try a three-layer method first described by Doogs over at Doogs Models and further promoted by Jon B at The Combat Workshop. Here is how this technique was applied to this Sherman:

I started by priming the model with Vallejo Surface Primer Black. While my photos show the hull, it shoud be noted that everything was painted with black primer but only the hull, turret and main gun would get the three-layer method applied.

Next, I sprayed white on surfaces which I wanted to highlight. I primarily emphasized the upper surfaces. I used Vallejo Model Color White and ran into a problem with paint splatter. It turns out that the tip of my airbrush needle had gotten bent. When I replaced it, the brush started shooting normally again. Still, when I first saw the splatter, I freaked out but then I realized that it helped emphasize the cast texture of the hull and the turret.

Next, I applied several highly-thinned layers of Vallejo Model Color U.S. Olive Drab. I was a little disappointed with the end result. I did not get the tonal variation that I was looking for and the color itself was much darker than I was expecting.

Rather than strip the model and try again, I decided to provide apply additional tonal variation by airbrushing a lighter color on the horizontal surfaces. Here, I used Vallejo Model Color Brown Violet. Whereas I used a 4:1 thinner to paint ratio for the olive drab, I used an 10:1 ratio for the brown violet. I applied a few coats, each pass covered a little smaller area than the previous. I was effectively building up layers like you do when using acrylics on figures.

The photos still look a bit dark but in real life, Im very happy with the results.

With that behind me, I turned my attention to the turret. The Dixie Belle wore a yellow stripe, along with a yellow star and yellow company identification markings on the turret. Tasca provides decals for the stars and markings but asks you to paint the stripe.

For this stripe, I cut a ~3mm wide piece of tape and carefully wrapped it around the turret where I wanted the stripe to be.

Then, I took 6mm tape and butted it against the 3mm stripe. Once in place, I pulled off the 3mm tape and burnished the wide pieces. Then, I blocked off certain areas of the stripe where decals would be applied.

I wrapped wide blue tape around the 6mm tape to protect exposed areas of the turret. Then, I sprayed Vallejo Model Color Flat Yellow and removed the tape.

I was surprised by the amount of bleeding that I had. Tamiya tape has proved an effective masking tape for me, which is what I used; however, I think I thinned the yellow did come out of the gun runnier than I expected. So, I wont blame the tape.

Nevertheless, Ive simply pulled out the 3mm tape that I used for the stripe, carefully reapplied it over the yellow tape and airbrushed the problem areas with thinned olive drab. The results were very good:

(Yes, there is still a small spot of yellow on the gun mantle but it will be covered by the gun shield once installed.)

Now, its on to final assembly where Ill paint the accessories, add some decals and bring all the pieces together!

I did my best to get this finished, but this is as far as I got and will get for some time.

It was a Great! campaign and I enjoyed it.

PHOTOS
Dragon164 (Rob) said
Still working away at my M32B3

Ran into some unexpected issues due to using the M3A3 hull, had to fit some interior items in through the turret ring

then I fixed the weld beads on the hull with stretched sprue using my favorite tool for this the Mission Models round chisel.

then some grab handles were made some guards thinned and some from the spares box added,there was still a fair amount of parts cleaning left and a few holes that needed drilling but I think I can add pait in the morning before I go to work.

PHOTOS
Milites-Christi (Jerry Jackson) said
Finally!! Thank you for an awesome campaign. I have more question now than i did before the start! Here it is! 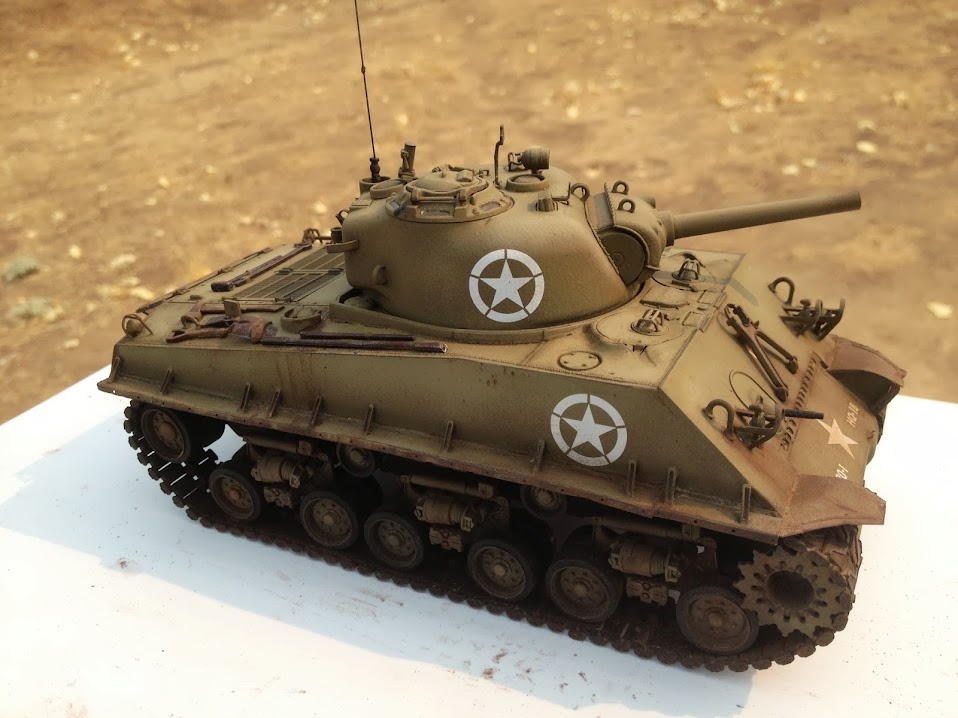 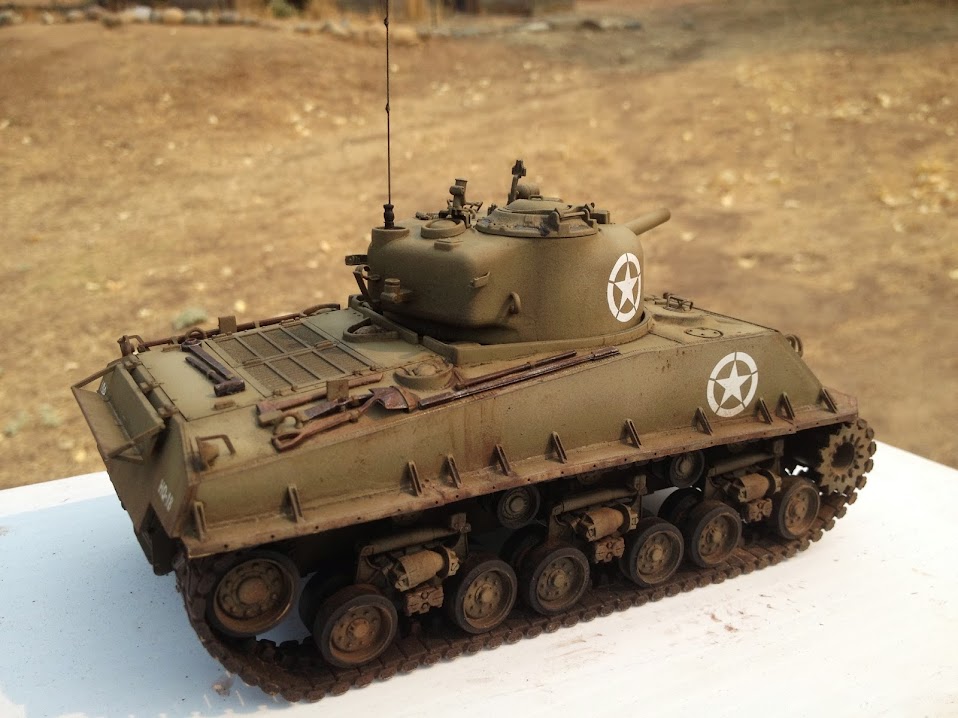 Accept the challenges so that you can feel the exhilaration of victory. - George S. Patton

John thanks for the ribbon

"Lord Raglan wishes the cavalry to advance rapidly to the front, follow the enemy & try to prevent the enemy carrying away the guns. Troop horse artillery may accompany. French cavalry is on your left. Immediate. R Airey."

PHOTOS
Dragon164 (Rob) said
John,
I will probably not finish before the 4th

new work schedule and such.

WWW
PanzerGeek (Todd Hall) said
John and Jeff thanks for an awesome campaign. I totally enjoyed it, so many excellent Shermans.

"Live, So That You May Live Forever".

I just got around to uploading some pics of my M32 to the gallery. Hope it's not too late for the ribbon!

Thanks for running such a cool campaign!

PHOTOS
Bluestab (Alex) said
Thanks John and Jeff for the campaign.

Nice to see so many different Shermans.

"If nothing else works, a total pig-headed unwillingness to look facts in the face will see us through."
General Sir Anthony Cecil Hogmanay Melchett
Blackadder Goes Forth

WWW
PanzerGeek (Todd Hall) said
Thanks Guy. I'm really chaffed at the way the kit came out. I have practised the wood grain on the tools for some time and have finally got it to were I like the look of it. Just keep practising.