REPLY & QUOTE
PantherF (Jeff T. Stringer) said
Well, I admitted to making a mistake and tried to lighten the atmosphere up with injecting a little humor into it... so I don't know what else to do or to say for you.

Yeah, I know my shortcomings but explaining why every-time would be redundant. I may not make the deadlines but I do eventually get them finished.

So, I myself am looking into a potential kit that will fit. Maybe a kit bashing is in need here.

REPLY & QUOTE
Bluestab (Alex) said
Jeff, I let the eye exam comment go as an attempt to be funny. However, the half-started comment really came off as a last minute jab. That seems to be a sticking point to you, even though I have explained why I ask about partials...none of which are "half-started". My queries are usually for kits that are in the 10-15% range. And I usually only ask if the matter isn't stated in the rules. And I'd also add that I built two StuGs for the first StuG Campaign to make up for it. That campaign seems to be where all of that stems from.

As far as your campaign finishing rate, I posted on that and supported you on that. That's when I got the idea about suggesting you finish the rocket truck over here. I was actually going to PM you to suggest asking Bob about it. At that time I was still under the impression that Bob was running the campaign and that it had been opened up to post war subjects. I wasn't sure about your progress but I figured maybe an exception could be made.

Anyway, all the details have been clarified. We all know where this campaign stands.

At this point, I have no plans on re-enlisting. I've got another pair of campaigns that I am debating on dropping one. It's the Market Garden and Lend-Lease Campaigns. I've got a kit that would work for either and I'm waiting until the start date to decide which one I am going to go with. I debated on dropping your howitzer campaign but I'll probably stick with it. I'm in to the diorama base thing right now and that's a perfect campaign to work on some groundwork ideas.

I've just got a couple of big projects planned...my walker ad a survivalist/prepper base. Not to forget a stack of half-built kits....that's why I dropped out of the second StuG Campaign. I've got 6 unfinished StuGs I want done by year's end.

My apologies to the rest of the board for this thread taking a rough turn. If Jeff wants to discuss it any more we can finish this in PM.

REPLY & QUOTE
PantherF (Jeff T. Stringer) said
Not me... I have no problem as things just roll off my sleeves these days.

I'm here to have fun, not to keep score.

REPLY & QUOTE
PantherF (Jeff T. Stringer) said
Thanks so much John! I was going to announce it but that's okay!

Hopefully this will clear up a few things and more will sign up now that the restricted period has been lifted.


I DID forget (but hey, it's really a new Campaign to me) and I am truly sorry for the mistake guys. I think everyone is allowed one brain fart but believe there's always an eraser at the end of that pencil.

As requested, removed the WWII period.

Just saw this, but the title of the Campaign still says "Rocket Weapons of WWII" so please clarify for me.

If it is no longer WWII then that really does open up a lot of possibilities. For my part, I like keeping it WWII so that the next campaign can be rocket weapons of the cold war and beyond.

Anyone have any experience with Mirage Hobby's UE(f)-sWG 40 28cm German WWII Self-Propelled Mobile Rocket Launcher? Is it a decent kit? What kind of tracks? Thanks!

Anyone have any experience with Mirage Hobby's UE(f)-sWG 40 28cm German WWII Self-Propelled Mobile Rocket Launcher? Is it a decent kit? What kind of tracks? Thanks!

This one? http://www.internetmodeler.com/2002/august/first-looks/Mirage_Renault.htm
The review is quite promising, but actually I´m a bit afraid to try it out myself. The kit is cheap, but I don´t really need another shelfqueen, in which it will probably turn.

REPLY & QUOTE
Namabiiru (Mark C.) said
Fabian,
Thanks for responding. The kit you showed is for a vehicle carrying 32cm rockets and does not seem to be carried any longer by any of the online stores with which I am familiar. The kit I was looking at is the 28cm version http://www.megahobby.com/uefswg4028cmgermanwwiiselfpropelledmobilerocketlauncher135miragehobby.aspx

However, I think I can safely assume the two kits to be fairly similar, and if that is the case the main question I am intersted in--the type of tracks--appears to have been answered. Many thanks!

REPLY & QUOTE
kapoybana (George Brumit) said
The Renault UE is not a bad kit. Years ago I built one with a Tamyia PAK 36 mounted onto it. The tracks are solid plastic length and link they are the same styrene as the rest of the kit. The launcher frames are soft on detail as are the rockets maybe best replaced with Tamyia .

Fabian,
Thanks for responding. The kit you showed is for a vehicle carrying 32cm rockets and does not seem to be carried any longer by any of the online stores with which I am familiar. The kit I was looking at is the 28cm version http://www.megahobby.com/uefswg4028cmgermanwwiiselfpropelledmobilerocketlauncher135miragehobby.aspx

However, I think I can safely assume the two kits to be fairly similar, and if that is the case the main question I am intersted in--the type of tracks--appears to have been answered. Many thanks!

Mark, I have both kits and I can confirm that the tracks are of link and length type. Looks like an ammo belt in 1/16 though a bit larger. Haven't built either, but then again that's another story in itself.

Hopefully get some clarification soon on what is included in this campaign (WWII-only vs anything). If it's open to anything I've been wanting to do a US M-270 MLRS for awhile, but if WWII-only, then will most certainly go with some sort of Stuka zu Fuss, either Renault or 251.

REPLY & QUOTE
Namabiiru (Mark C.) said
Belay my last--looks like the campaign name has been updated.

Campaign page to Enlist and check the Rules: HERE

REPLY & QUOTE
Namabiiru (Mark C.) said
After looking at reviews of several other kits I was considering I finally went with this one:

REPLY & QUOTE
Long time modeller. Starting when I was a teenager, then I found out about girls and college and work and kids. But now that I have one girl, no school, no work and the kids are grown, I'm back to full time modelling. My prime area of interest is armor, b

I´ve got the old Revell/Esci Nebelwerfer and aquired the Italeri kit aswell (you can get tham for "an apple ans an egg", as we say here) I think I´m bashing the two kits together to get the best of both... 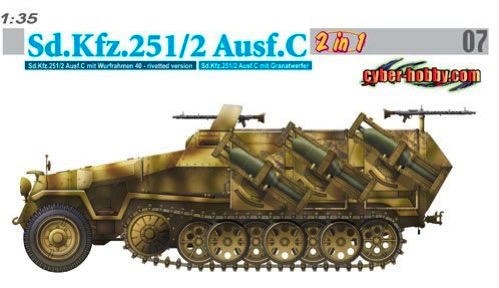 I just have no idea when I will start it

REPLY & QUOTE
BravoTwoZero (Joseph Rocamora) said
Here is my entry for this campaign.

I got a start on my little Rennault over the weekend. Holy crap; It's small! Hard to believe it's 1/35th; It's like working in braille scale!

REPLY & QUOTE
ColinEdm (Colin Key) said
Here is my selection, just did an in-box review and will do a build blog on it as well. REPLY & QUOTE
ColinEdm (Colin Key) said
So some progress, I am doing a build blog on this as well, but here it is:

Initially I was going to do this straight OOB, but as I get into it, I find more shortcomings and find myself doing a bit of scratch and using some bits and bobs from my spares box.

I started off with the engine, simple enough and goes together easily although there is a fair bit of flash and seams to clean up. I will probably leave as is and keep the engine hatches closed unless I can track down some good engine bay shots for additional detailing.

Next the chassis, again it fits together well but lots of mold seams to clean up.

I skipped over to the hull next. A lot of the details here are pretty soft. The rivets are so small as to be non-existent, and Tamiya provides 240 larger rivets of the link and length track sprues to replace the molded on rivets.

I decided to give it a go. It is a lot of work and I am losing a few, but progressing nicely. Not sure if it is an improvement over the molded on rivets as they seem a bit exaggerated now.

I finished off the rivets, but I had to make a bunch of my own as there were not enough supplied with the kit. Sanded them down so they aren't so overwhelming. Also scraped off the hatch support hooks and added new ones made of brass wire.

Then it was back to the chassis and running gear. As I was putting on the running gear it became apparent that the forward pairs of road wheels would not be resting on the ground, but would be floating. Here you can see the gap between the axle and the mounting points.

This was solved by shimming the mounting points with strip styrene:

And its all good now:

Only trouble is I didn't take the time to fit the tracks so I have to put them on and see if the front wheels will be floating now...
On to the interior. Added some details using some bits from my spares box, and added clamps to rocket racks. I'm leaving one open as I am planning on having a crewmember in the upper hatch loading the launcher. Decent interior pics are rather sparse, so some conjecture is involved with the interior details.

REPLY & QUOTE
SGTJKJ (Jesper) said
Looks nice, Colin. Some good corrections. I think you were right to sand down the new bolts. The bolts seem very Inconspicuous on old pictures - but of course difficult to see properly.

Maybe Italeri got it right and Tamiya got it wrong?

In any case your build looks good and I am looking forward to see more.

REPLY & QUOTE
ColinEdm (Colin Key) said
Thanks Jesper, we'll see how the rivets look after paint. Life got in the way of things for a while, but I have managed to get a bit done for a small update. First, the tracks. Tamiya has provided link and length tracks with this to replace Italeri's vinyl tracks. It is rather tedious work cutting them all off the sprue, and they are quite fragile with a number of them breaking during the process. At least they provide a fair number of extras, and they do look good when complete:

I also worked on the rear doors. the stock units have pretty soft detail and pronounced sink marks:

So I ginned up some new latching mechanisms out of some spare PE sprue, piano wire and styrene rod:

Next will be finishing off a few more internal detailed then painting the interior.

All the work on the tracks are definitely worth it. I think you got a perfect sag to the tracks.