Dioramas
Do you love dioramas & vignettes? We sure do.
Hosted by Darren Baker, Mario Matijasic
mercedes L3000 with snowplow

REPLY & QUOTE
mcsixtyfive (paolo totaro) said
hi all,
in the latest weeks I started a new project, wich I supposed to be less demanding: starting with the old (really very old) italeri's kit, I tried to build a convincent snowplow at work on a mountain road, just adding a plusmodels blade... how far I was from true!! 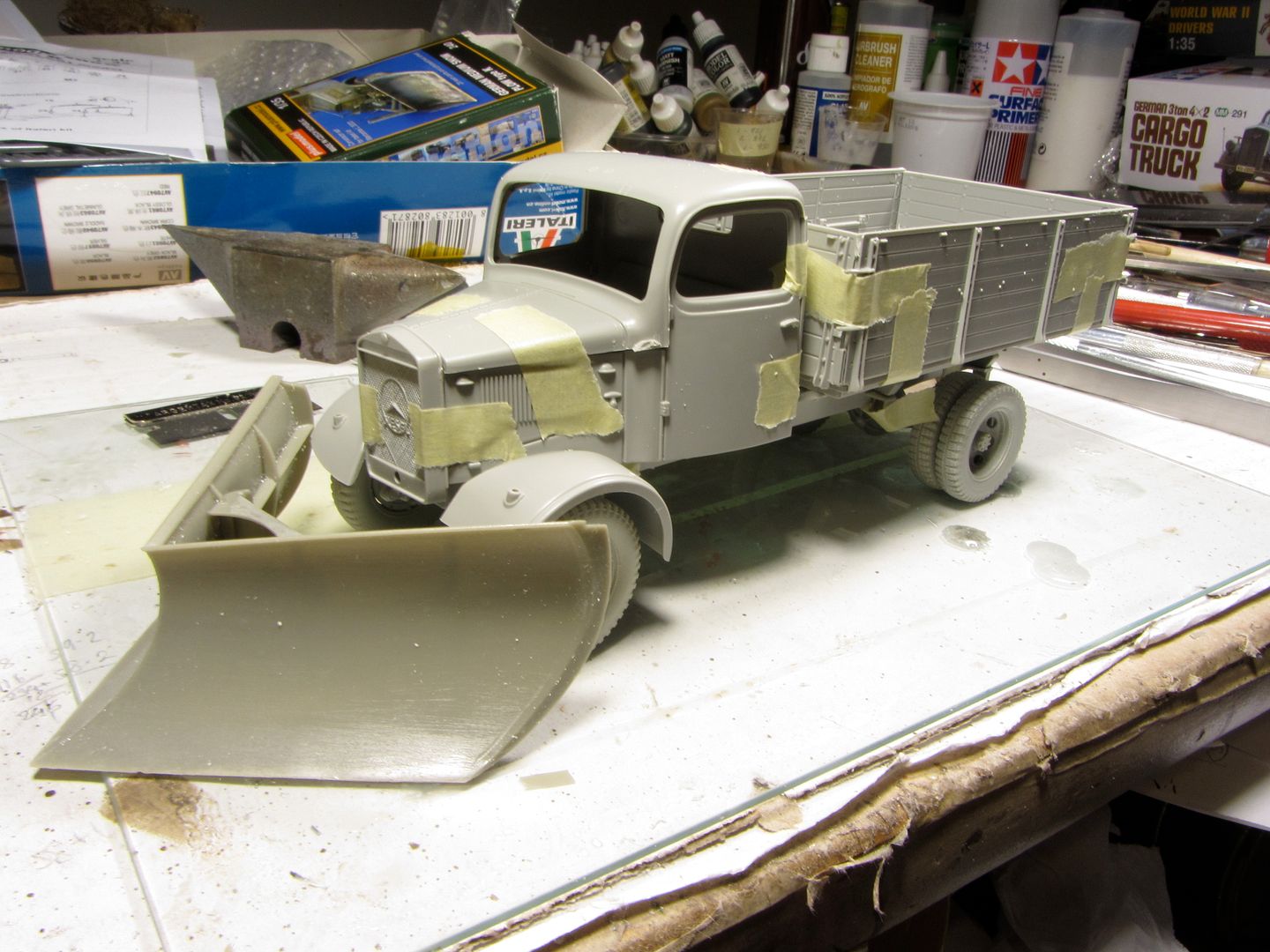 well, also the engine is wrong... actually the L3000 mounted a four cylinder diesel...
so, I elected to redo them totally, using a PE set from minor. a really nice set:

the improvement is evident...

and being careful, it's workable!

since also the chassis's crossbars where wrong, i rebuild them with brass sheet.

REPLY & QUOTE
thewrongguy (Jeff) said
So far so good, I love seeing off the beaten path sort of builds.

REPLY & QUOTE
mcsixtyfive (paolo totaro) said
thank you, jeff!
so you will love this, I suppose...

I used a lion roar dedicated set to improve the mercedes here and there...

and, before assembling the cabine, I assembled a pair of guys to be there. I wasn't afraid about their look, I had in mind to paint the windows as they where whitened with mist...

for the rear cabin, I wanted two soldiers working with some sand to be thrown on the road cleared from the snow, so I elaborated a little those...

meantime, I began to paint the chassis, electing to "forget" the wrong engine. 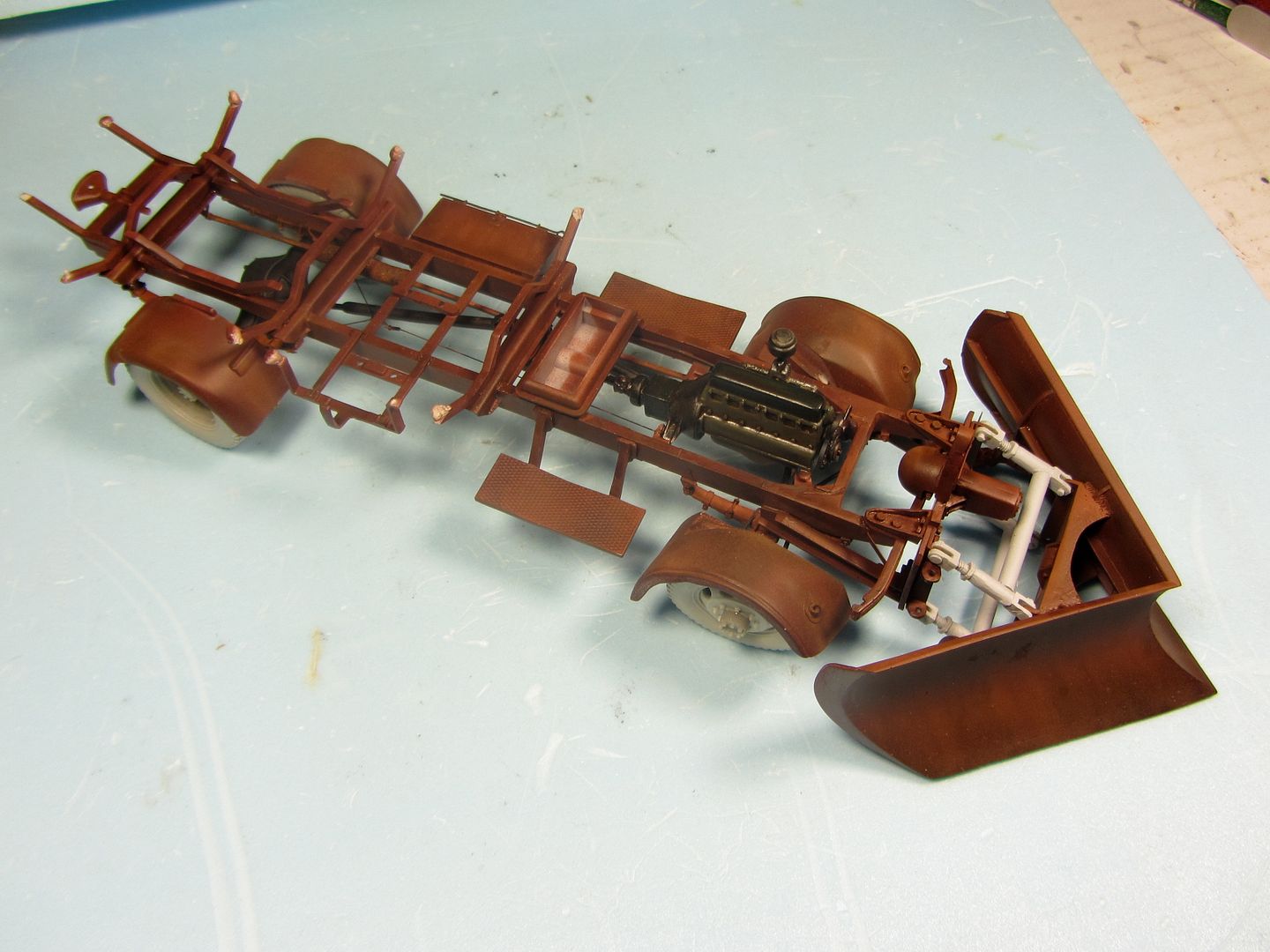 then I mounted snow chains on resin wheels...

and began to study a way to do the canvas...

REPLY & QUOTE
mcsixtyfive (paolo totaro) said
...and that wasn't so easy... at the Mk VI I was satisfied, or too tired to go on...

meanwhile, I worked out a new windscreen, with soldering rod gaskets, and deicing devices...

and then, with the cab fully glued, I was ready to prime it and began to paint the whole thing

then I painted on white stripes and insigna.

and, after some decals and oils,

It was time for zebra stripes!

now it was possible to assemble togheter the main components, and start to think at the payload.. 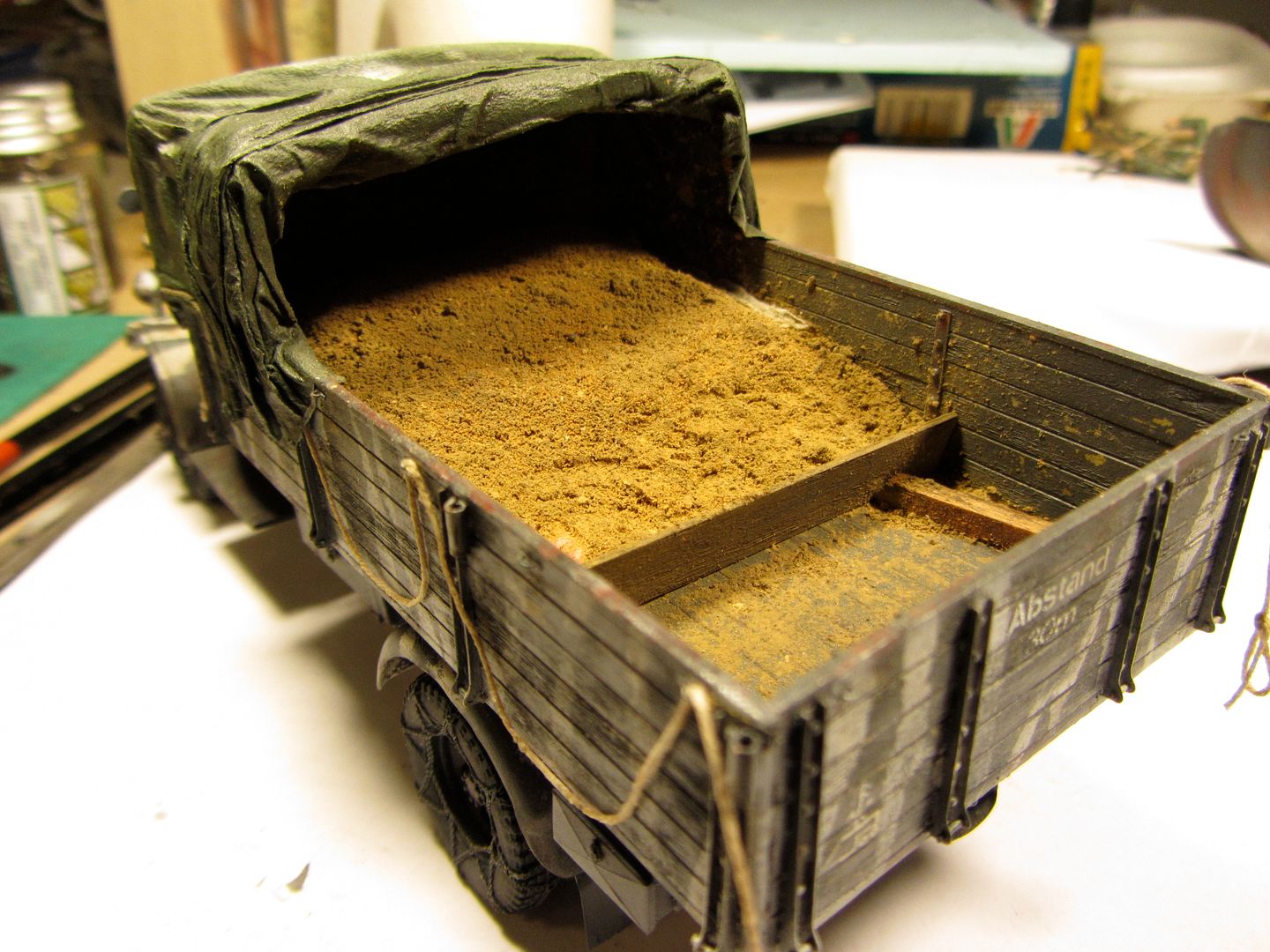 and to the workers, of course!

since the idea was to depict it in action, and potentially ambushed in a wood, I started with some trials of dio:

trials that are ended here: 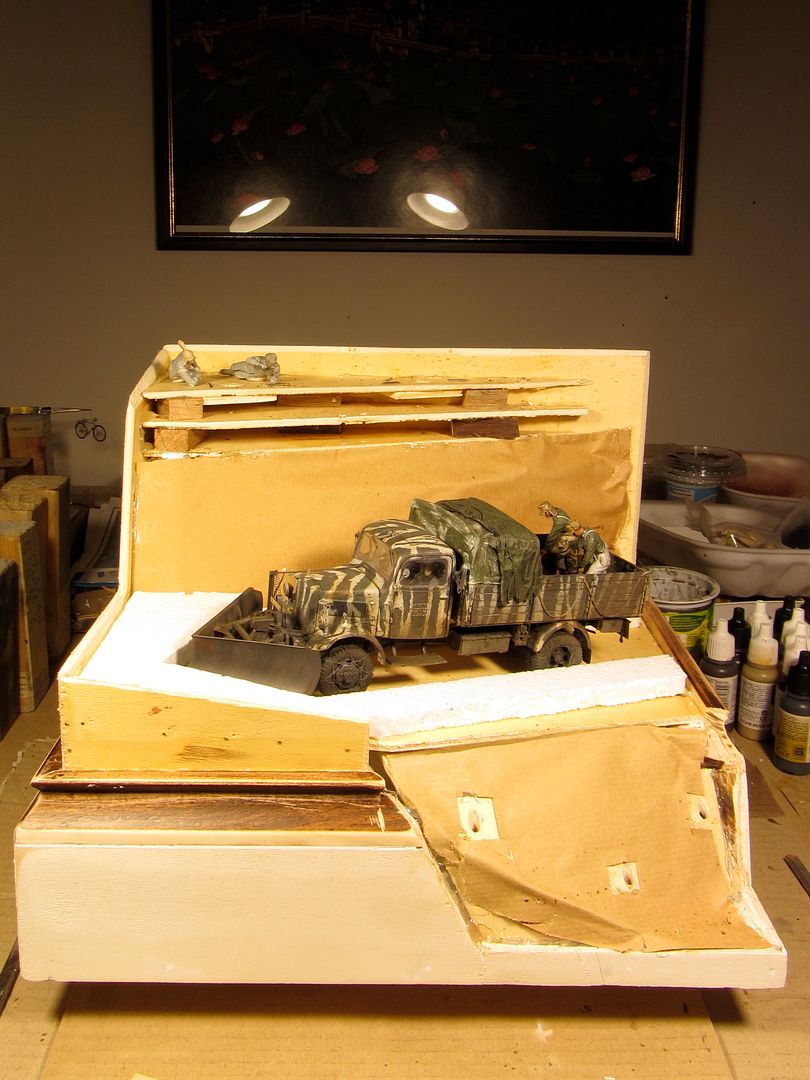 using some charcoal I reproduced the rocky walls, on wich stay the partisans looking at the mercedes, and assessing whether it's a valuable prey.

it's not easy to image it under a thick layer of snow, but... 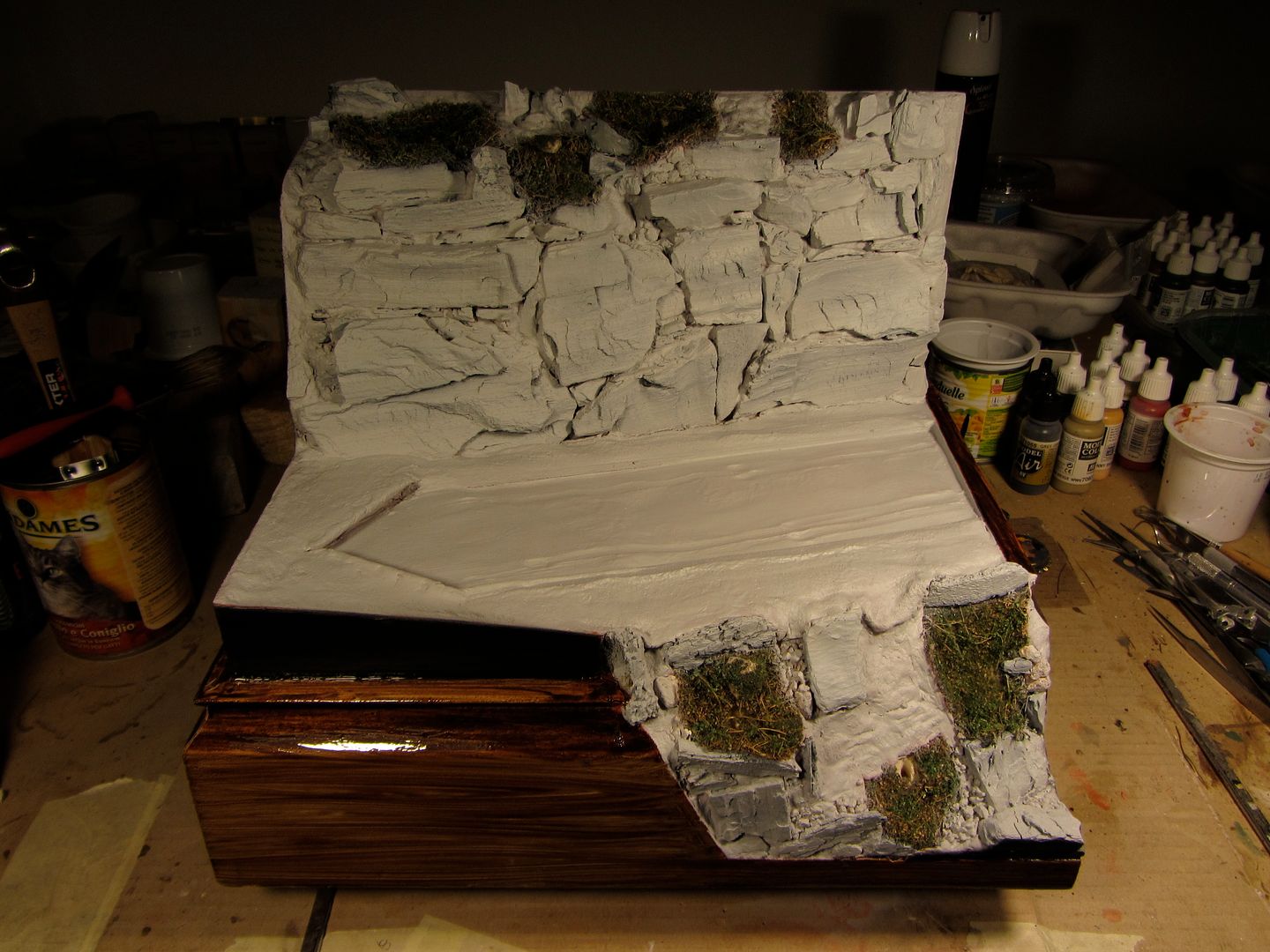 now I'm testing some primers, and colors, to better depict the rocks, 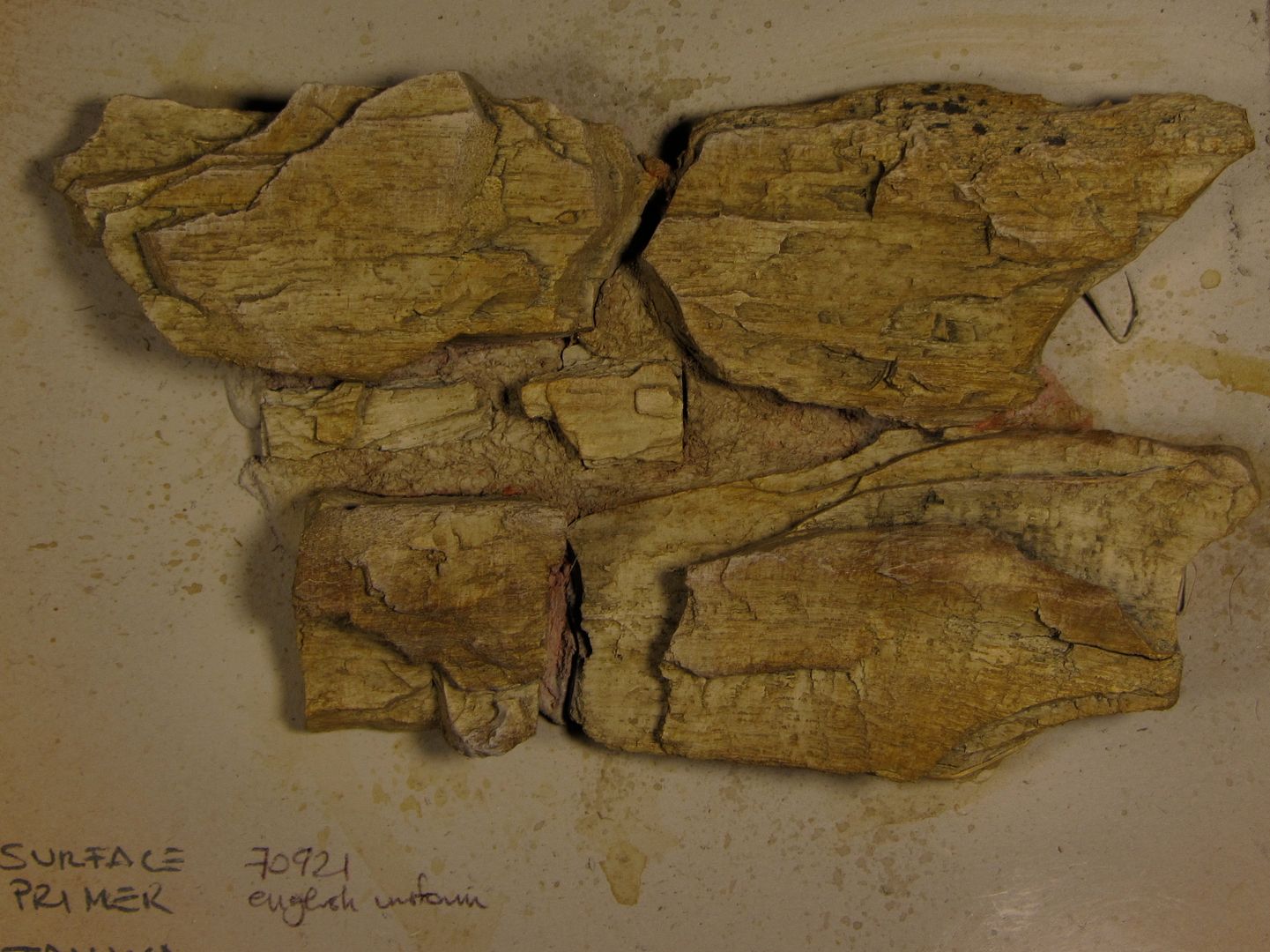 and when I'll be ready with taht, I'll start to paint the dio base..

well, at today that's all, folks!
read you soon, p.

Beautiful job and superb idea with grill wood as rocks - where I can get same great threes ??

actually, the dio borders a little in the crib, with those rocks and trees... but, hey, it's christmas, no?
I guess how it will be with the snow on...

przemo, the trees are from model scene, you'll find them here:
http://www.model-scene.com/index_eng.html

This is a massive work! Great story...and a stunning layout...looking forward to it...

REPLY & QUOTE
retiredyank (Matthew Nethery) said
This is really, very impressive! I occasionally dabble in super-detailing some older kits, but this one really stands out! All you need is a reindeer strapped to the hood.

REPLY & QUOTE
Plasticbattle (Frank Glackin) said
Hi Paolo. Its work like that cataches my eye. Great overall ... but the truck, the figures and the ground work are all class. I know the trees are a bought item, but they look very good. Must check them out. Nice one.

REPLY & QUOTE
mcsixtyfive (paolo totaro) said
thank you all!
a little progress on the rocks...

I had no time in the last period, just a dark wash, and some drybrush.

I like the way the characoal keeps the color, but I'm thinking ti add some more shadows and sagging..

it seems dark, but I have to mediate with the snow to come..

REPLY & QUOTE
roudeleiw (Claude Joachim) said
This is a very good job! I like every aspect of this dio.

REPLY & QUOTE
mcsixtyfive (paolo totaro) said
mh-mh...
I did some shadows, acrilic and airbrush first, oil and brush after.
maybe I have exaggerated it, but I trust in snow, plants etc.


...too late!
some ageing products by true earth, by brush.

REPLY & QUOTE
Tiger_213 (Christopher) said
No, don't think you over exaggerated the weathering on the cliff face, it looks beautiful.

You have a rare talent to find the right balance! Your painting (vehicles, figs and terrain) is superb!!

Big felicitations and thanks for sharing the beauty with us!

REPLY & QUOTE
jjcadenhead (John Cadenhead) said
Which trees did you use from them?

REPLY & QUOTE
DOntos (Dan Thomas) said
Hi Paolo
This is one of the most impressive dioramas I've see this year!
C[ ]

Just one question (may sound silly): The sand in the truck bed is it loose or glued with scenics glue?
Either way it looks amazing!

the trees are model scene products:

really good ones. what a pity, that I will submerge them with snow!

dan, isn't a silly question at all, rather, if you have the doubt that the sand is loose, it should mean that I did a good work on it!
to represent the non compacted sand I did the volume of the payload with a sheet of packaging (polystyrene) then added a layer of clay to simulate the irregular shape, and on it I spread a mix of some fine colored earths, fixing it at first with hairspray. this gave me the the time to add some blade's signs near the tail where the workers will be.

I build this sandwich outside the cab to better work on it. then I transferred it in its final place, and after add some earth to fill the edges, I spray it with acrylic matt.

looks like a long story, but it takes longer to describe it than to do it...