REPLY & QUOTE
Byrden (David Byrden) said
I can't see the text in this preview, so I don't know what was the intent of this book. But I rate it poorly for accuracy.

The title names a very specific Tiger and usually that implies a faithful reproduction of the named vehicle. But we don't have adequate photographic coverage of "313" to make a superdetailed model, and in any case, it seems the author wasn't trying to build it accurately.

The researchers at TIIF.DE have found enough photos of "313" that we can date it approximately.

The features of this model are wrong for "313". It depicts a mixed bag of details from March and April 1943; the real tank was built in May.

The markings are also wrong. The real digits were small, typical of the 505 battalion. The digits shown in the book are in the size and style of a different unit, s.Pz.Abt. 507.

This "507" style is very well-known and it's hard to see how they could be used by mistake. On the model, the smoke launchers sit over them, making them hard to read. This was not a problem for s.Pz.Abt. 507 as they never owned an Early Tiger!

REPLY & QUOTE
Byrden (David Byrden) said
I'm not too sure that the colour plates are good either. I can see "S33" of Pr.2, and the book (from what I can see) seems to tell us that the base colour was Dunkelgrau and the tank fought at Kursk in those markings.
In fact it was built in March/April, making the grey colour unlikely, and wore LSSAH markings at Kursk.

The plate for 823 of Das Reich shows the final turret bin and loader's periscope, which the real tank didn't have.

REPLY & QUOTE
RHChacon (Rodrigo Hernández Chacón ) said
Thank you very much David,
We have checked the information showed and we are agree with you. The tank published on Model Lavoratory is correct but "313" arrived late for operation "Zitadel". But the features of this model are right for "313".The markings and the smoke launchers has been documented on picture attached.

REPLY & QUOTE
Byrden (David Byrden) said
I can't find any photos of "313"/505 in "Tigers in Combat 1" that show me the front of the turret. I have the hardback edition of the book; perhaps you have a different edition?

But there is a list of all known photos of "313" at TIIF.DE and they show a tank without smoke launchers, and with light-coloured digits positioned low down on the turret. Here are the best examples; 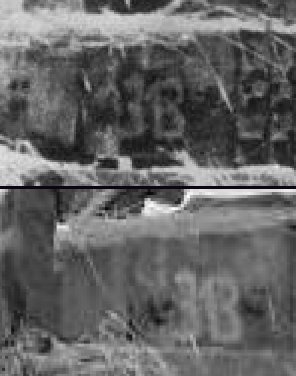 I apologize for the delay in sending you the picture.

The tank published on Model Lavoratory is correct

I realize this is a linguistic typo, but humerous none the less.

Thank you. I have never seen this photo in full size before.

This is the same hull as the other photos, but it's a different turret. It seems that "313" got a new turret but it kept the same number. The style of painting the number was different.

Now, about this new turret; I don't interpret the photo the same as you did.

On the right side of the turret, you see an impact and a vertical streak of rust. But I think that's the edge of a large repair plate. I see the front edge of the plate at [A].

As for the smoke launchers, I don't see them at all. The left side launchers should be visible at [B].