REPLY & QUOTE
accelr8 (Brian Lockwood) said
Or if you prefer,"Chicken Salad from Chicken $#@t, part deux". Since Pawel Krupowicz has already done a very brave and thorough job in detailing and correcting the various shortcomings of the Black Label M103A1 kit here: http://www.armorama.com/modules.php?op=modload&name=SquawkBox&file=index&req=viewtopic&topic_id=219229&page=1 I don't need to go into an intensive postmortem. Suffice to say, it's probably the worst researched kit i've ever taken a saw to.

In a move that should have surprised no one, Dragon added the D sprue from their M48 kits to depict the diesel engined M103A2. The dimensional errors that have been well publicized are unresolved in this release, but thanks to Pawel, there is at least a way forward for those like myself who feel the need to correct those errors. The faint of heart or those who fundamentally disagree with chopping up a $70 kit should turn back now.

I began with the hull, removing a 3mm slice from aft of the last road wheel mount, as i was able to decipher from Pawel's photos in his thread. 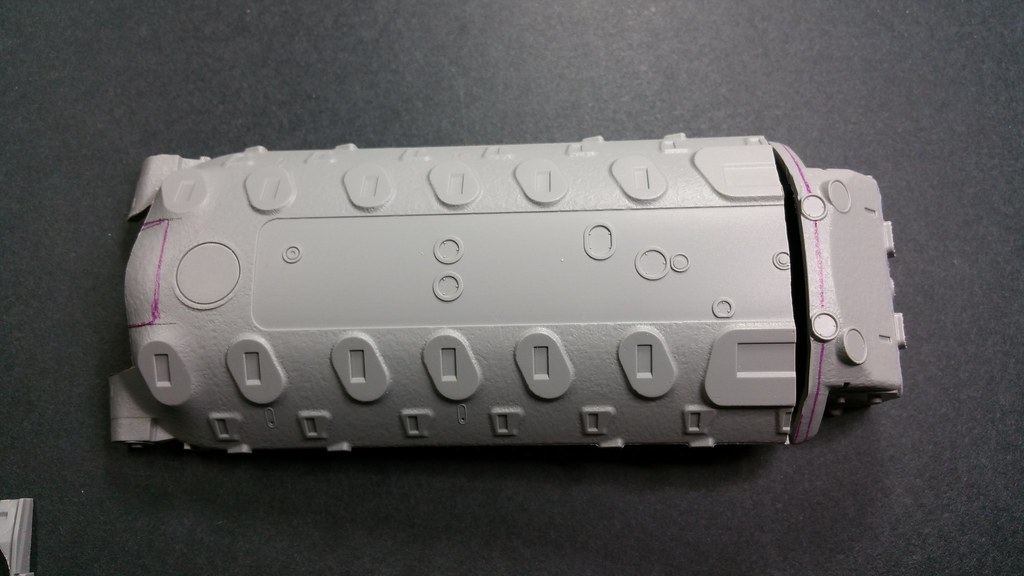 The turret ring and forward hull need to move back closer to the engine deck. Dragon partly covered for their too-long hull by making part A12, the mid-deck piece with fuel fillers far too big. So it was cut back as shown below. I also glued the side pieces D1 and D3 to the lower hull piece sawed off earlier: 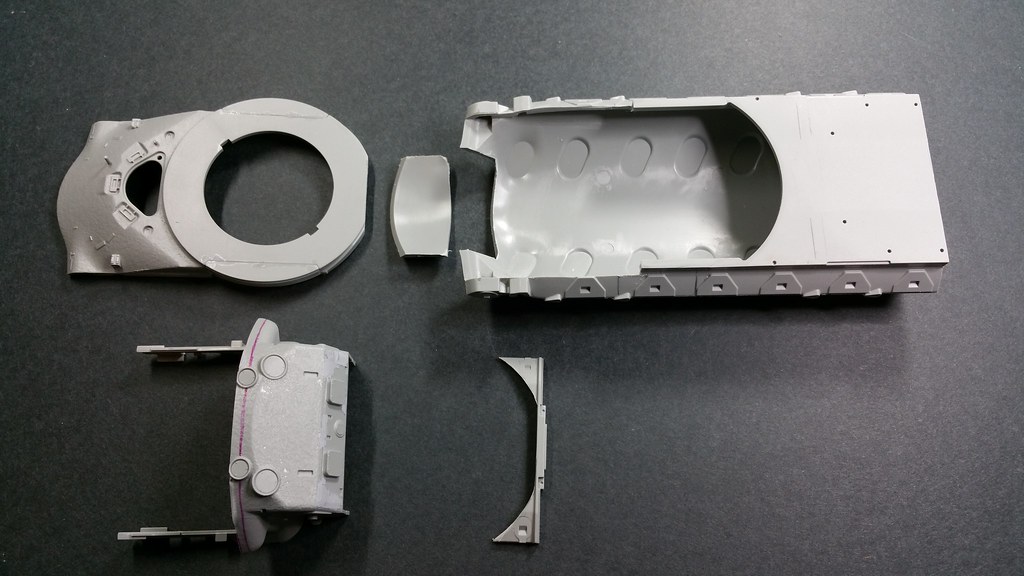 Everything tacked together to test fits: 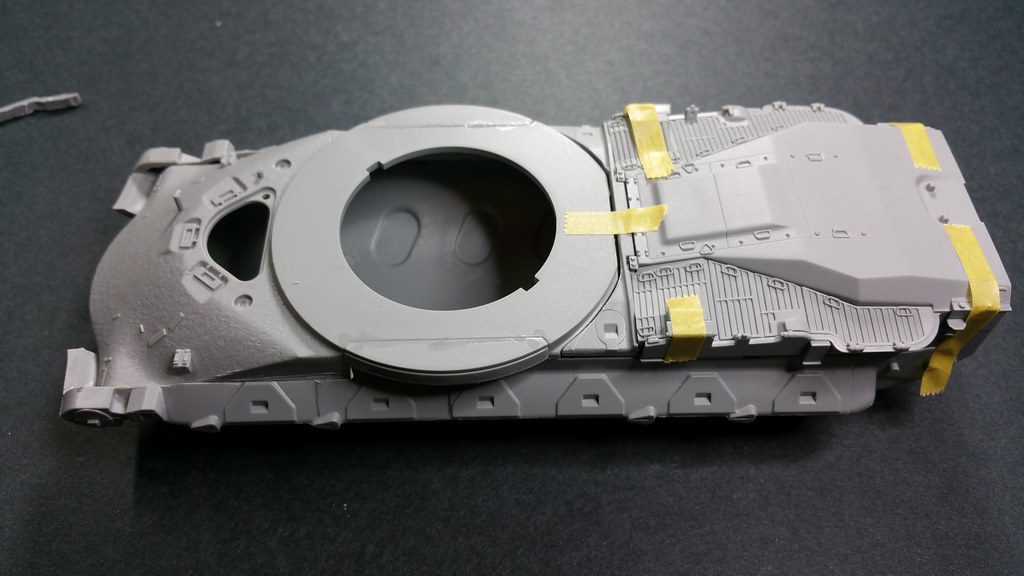 It helps to have an M48 on hand for comparison. You can also see the 3mm slices taken out of the upper and lower rear hull: 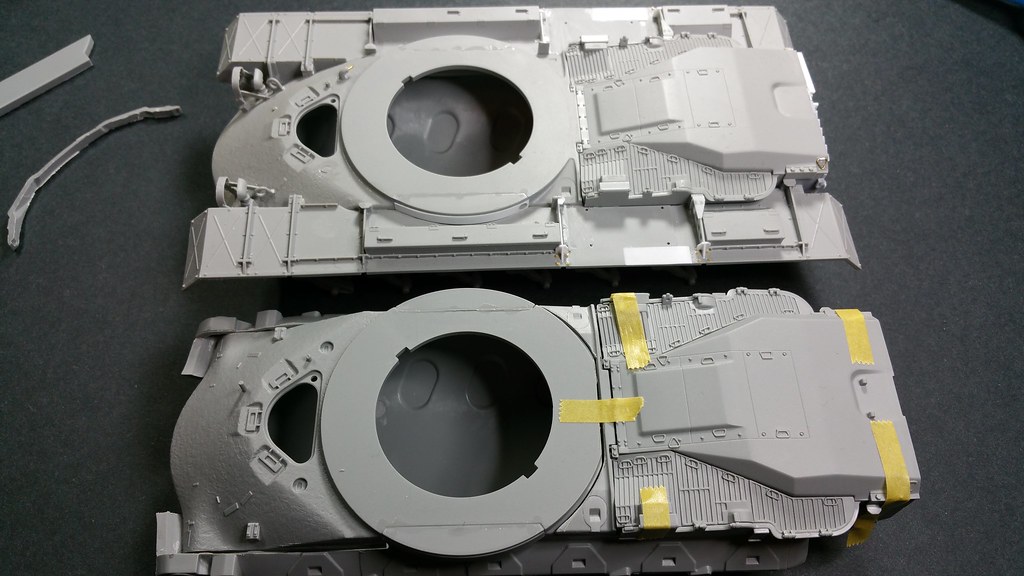 There was also some discussion regarding the turret, and whether Dragon would make changes to it. I can confirm that Dragon did replicate the "peaked" turret roof, but generally did nothing else save adding a searchlight plug housing on the roof. So it will go in for extensive remodeling ala Pawel's A1 in the coming weeks. 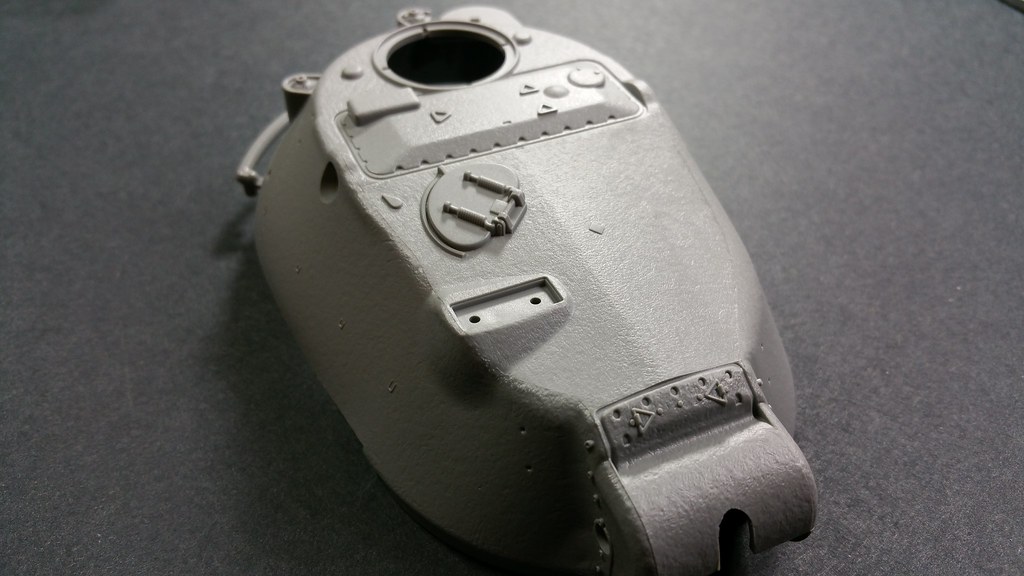 As much as it pains me to pile on, I also have to point out one more error Dragon made. They totally botched the shape of the final drive housings. For reasons unknown to anyone, they squashed the profile where it should be round. I've added the large red circles to Pawel's original photos to illustrate: 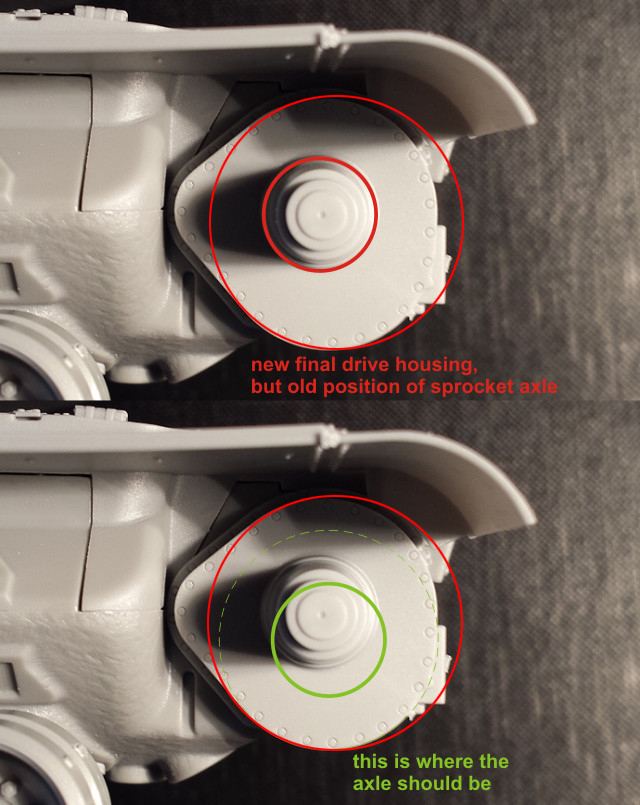 To verify, I took a trip to the Fort Lewis Museum to photograph their M103A2 and take some measurements. The real housings are round in profile and protrude noticeably due to the vertical engine exhaust grilles and aren't as noticeable on the M103A1. 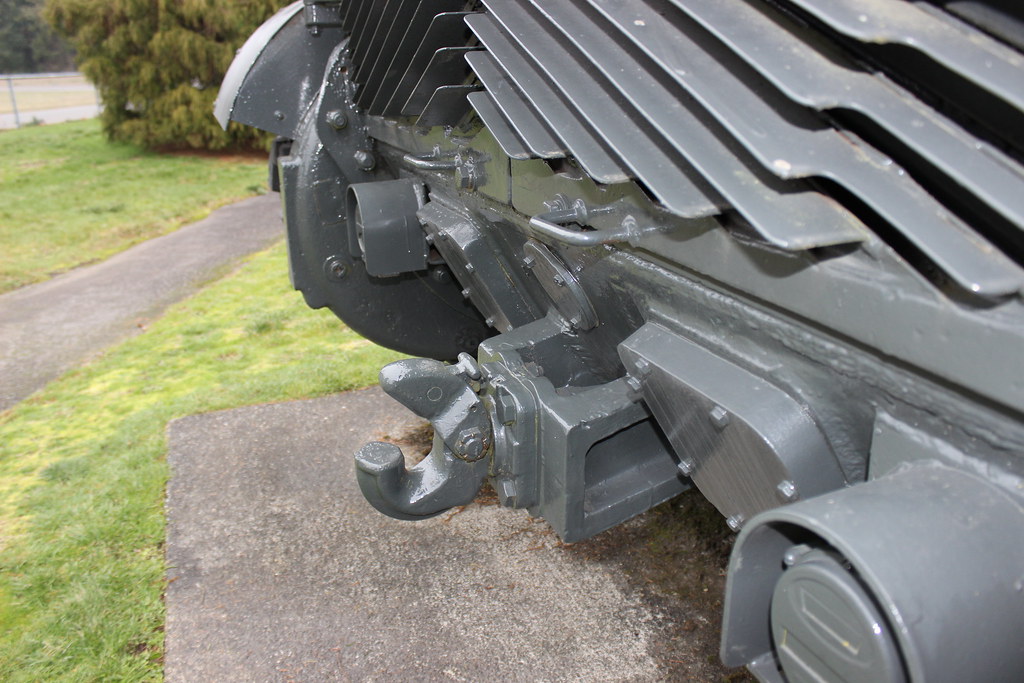 Will be watching with great interest.

REPLY & QUOTE
TankSGT (Thomas ) said
I have this kit as well and I'am very interested in your surgery. I may attempt it myself.

I have this kit as well and I'am very interested in your surgery. I may attempt it myself.

Ditto - (I will either correct it or I won't build it!)

My M103A1 is fully built and has a base layer of paint on it, but in recent months I took a short brake from active modeling (to spent some time on my other hobby - I'm an also an AFOL

), so it has to wait for a few more weeks before I finish it.

REPLY & QUOTE
accelr8 (Brian Lockwood) said
Pawel, your build is my primary point of reference. I hoped that you would post more pics of how you shortened the hull, but you put up enough for me to reach the same conclusions. I am having the same conundrum you did regarding rebuilding the fenders, although i'll be able to use the kit fenders from the air cleaner back. I am not looking forward to the turret.

REPLY & QUOTE
ColinEdm (Colin Key) said
Kudos to you both Pawel and Brian, you are much braver than I to take on such an undertaking!

REPLY & QUOTE
accelr8 (Brian Lockwood) said
I've started roughing in the forward hull with apoxie sculpt after trying out a number of different putties and not being satisfied with any. I found a tip on the web advising that AS adheres better if you rough up the plastic with a little liquid cement. Also filled and smoothed the filler cap area and the gashes in the lower hull left by my saw (not pictured). 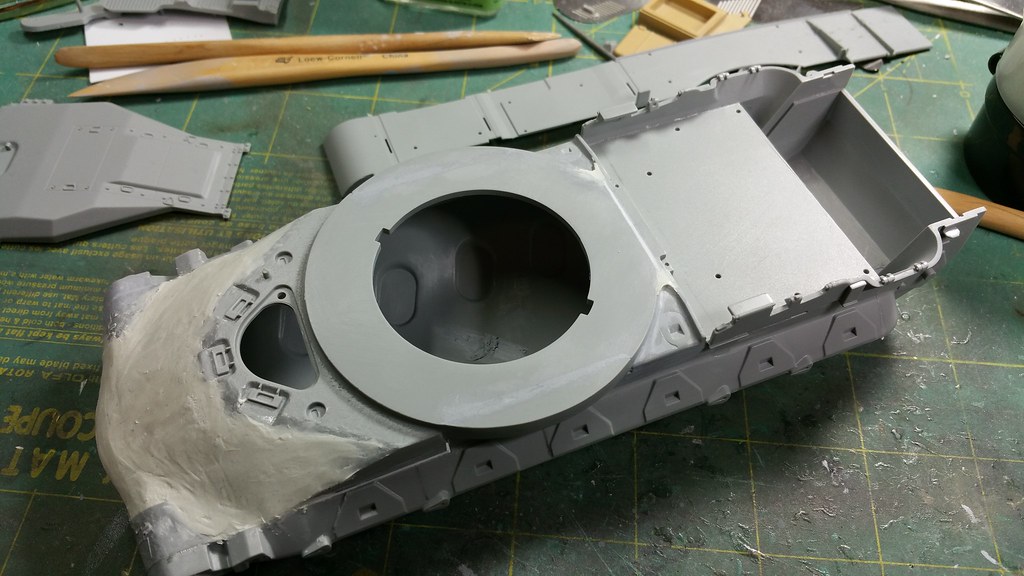 REPLY & QUOTE
accelr8 (Brian Lockwood) said
More progress on smoothing and shaping the front hull. The shape is actually quite different and the angle is deeper than the M48. The upper front has a distinct curve all the way across, where the later M48 is squared off where the armor meets the turret ring. 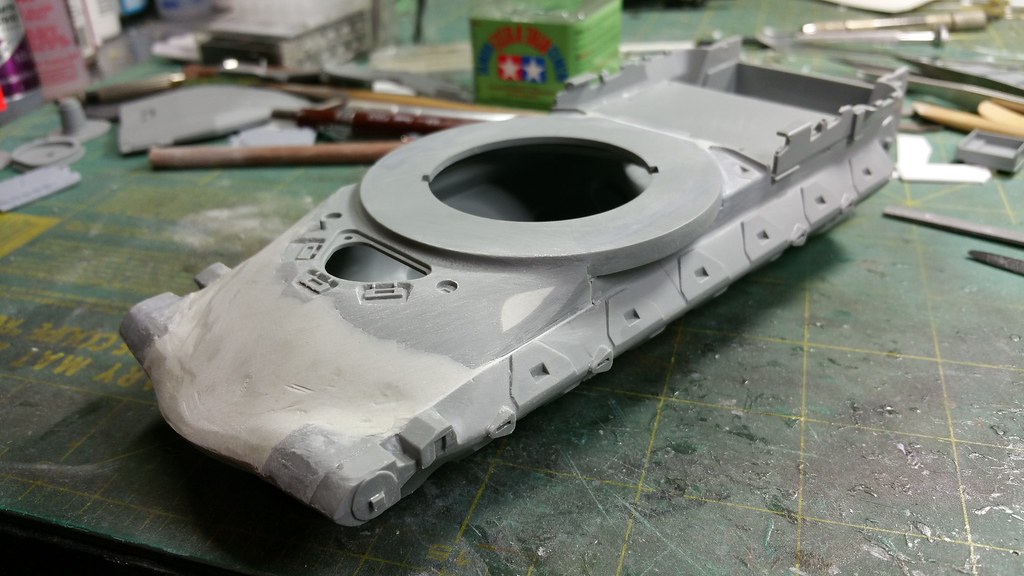 A better illustration. The shaded area has to be removed and rounded. 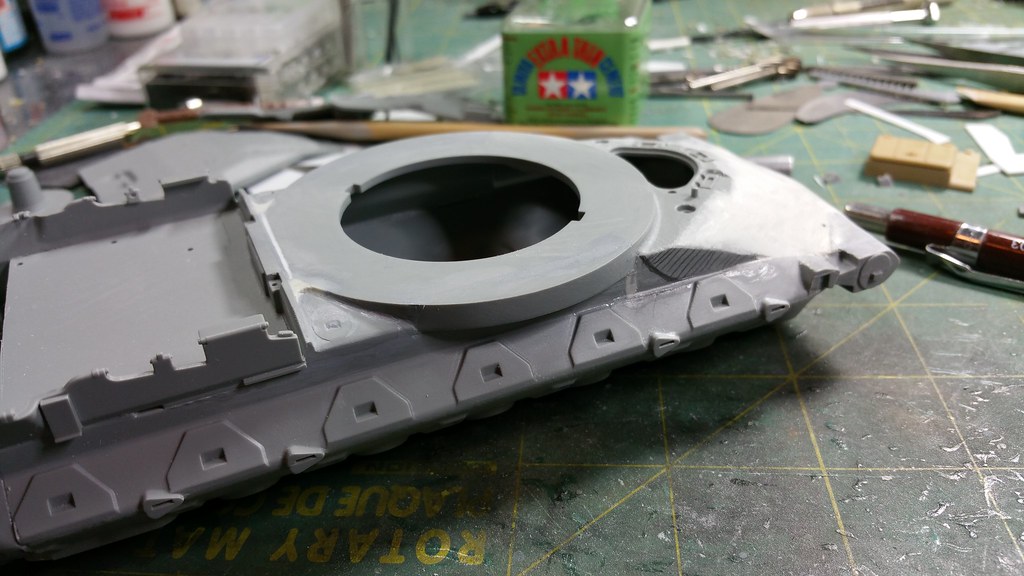 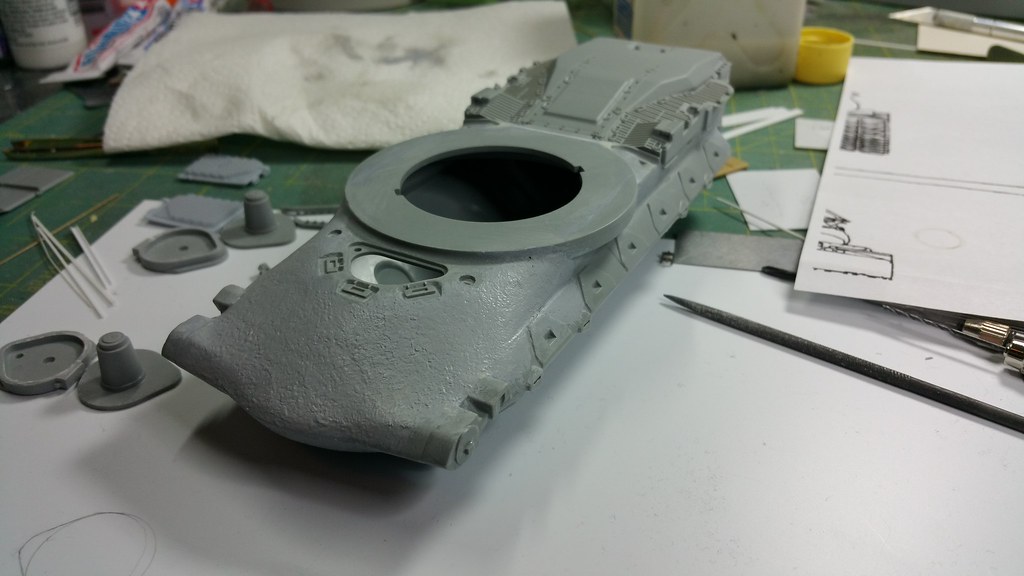 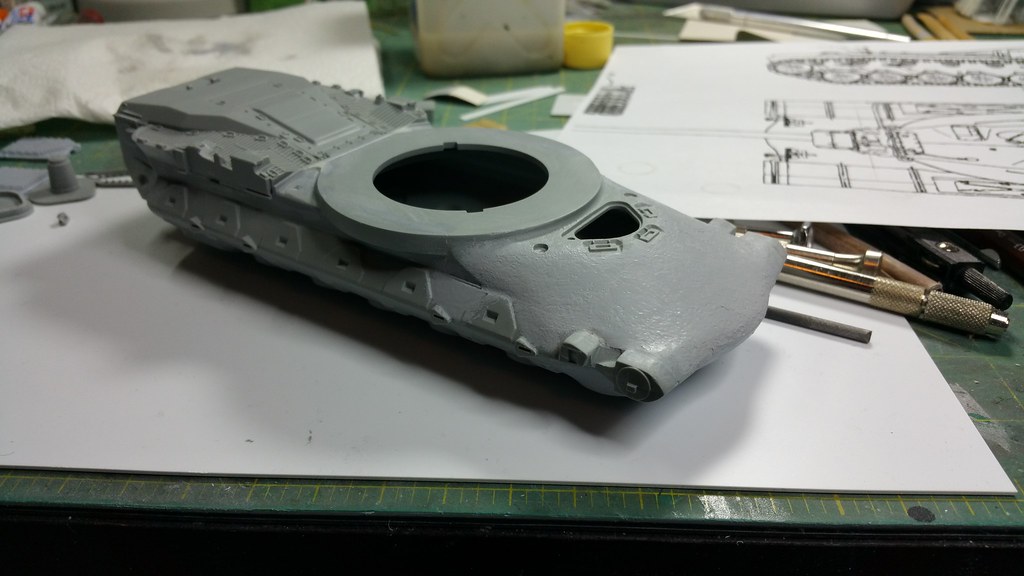 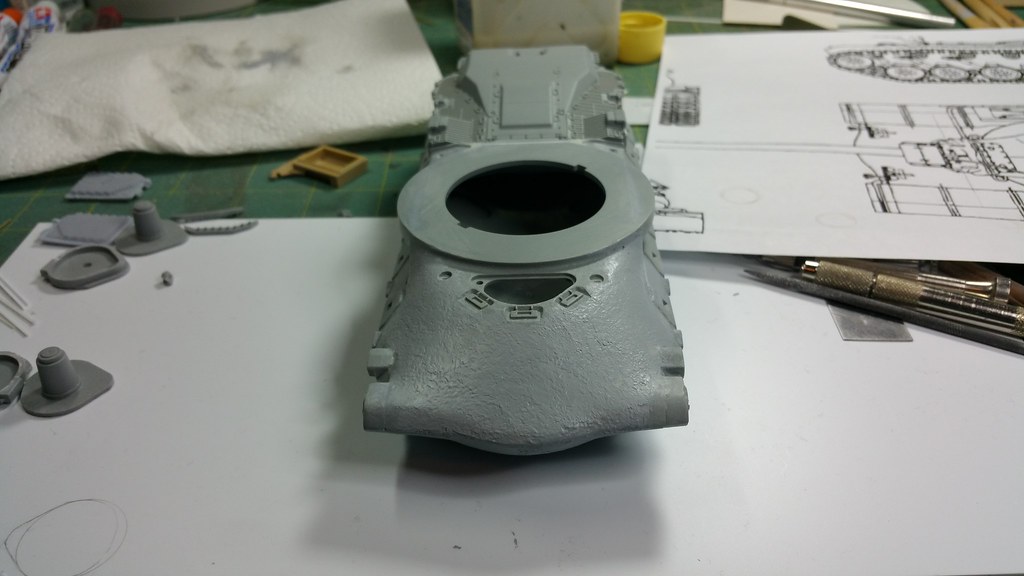 fixing the mounting pads for the suspension arm mounts. 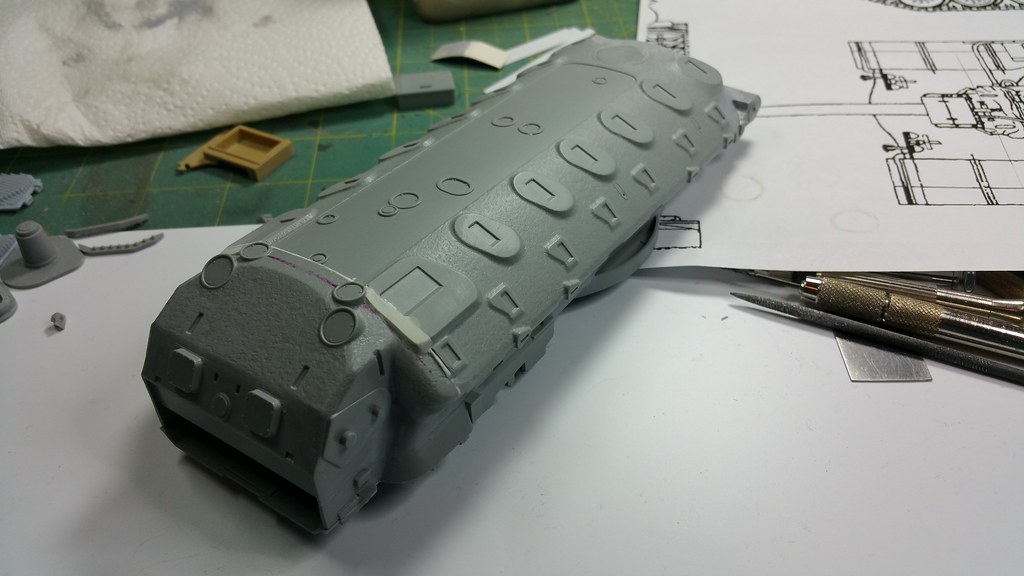 This is fantastic. I am watching with interest! You might just get me to buy this kit...

REPLY & QUOTE
165thspc (Michael Koenig) said
Without your very fine inspirational conversion work there would be NO CHANCE that I would ever purchase this kit! Now there is a serious possibility!

REPLY & QUOTE
okievit (Olaf Kievit) said
Impressive work so far. Will be added to my file from Pawel, in preparation for eventually tackling my M103A1!

REPLY & QUOTE
"Life moves pretty fast. If you don't stop and look around once in a while, you could miss it." - Ferris Bueller

REPLY & QUOTE
accelr8 (Brian Lockwood) said
Thanks gents. If you attempt to recontour the hull, Dragon was nice enough to mold it extremely thick for you. Thick enough that here is the only place you'll break through. Just back that area with putty beforehand and use the sander drum bit in the dremel. Sanding sticks will take forever and drive you insane! 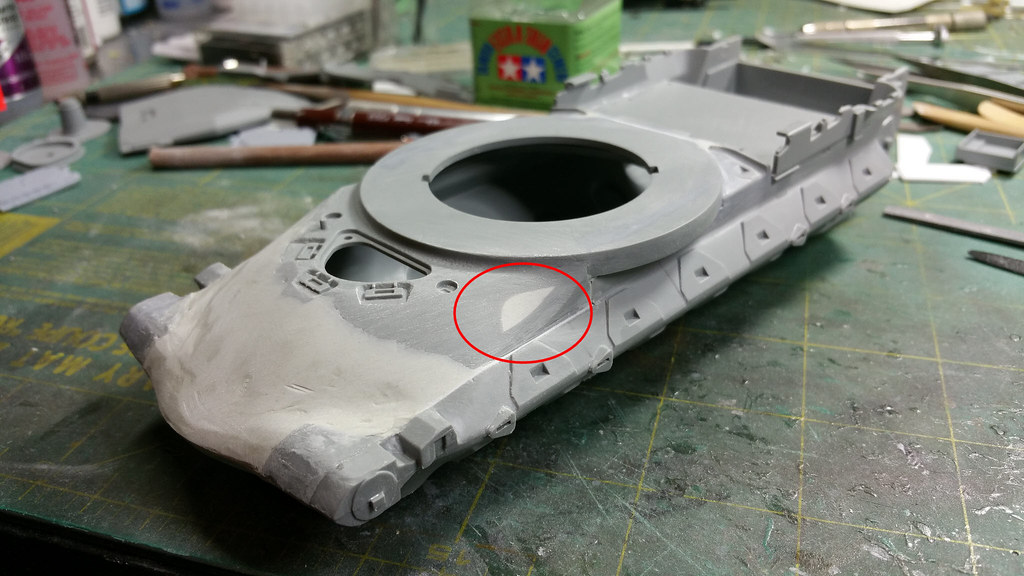 REPLY & QUOTE
165thspc (Michael Koenig) said
Brian, With all your polishing you sure put a nice shine on this one!

REPLY & QUOTE
Vodnik (Pawel Krupowicz) said
Brian, have you reduced the curvature (flattened) the hull "nose" or "beak" edge? On your last photo it doesn't seem to be reduced, but it may be just the angle of the photo. The distance between the idler axle line and the most forward "tip" of the hull (measured along the hull length) should be about 2 - 3 mm smaller than in the kit parts. 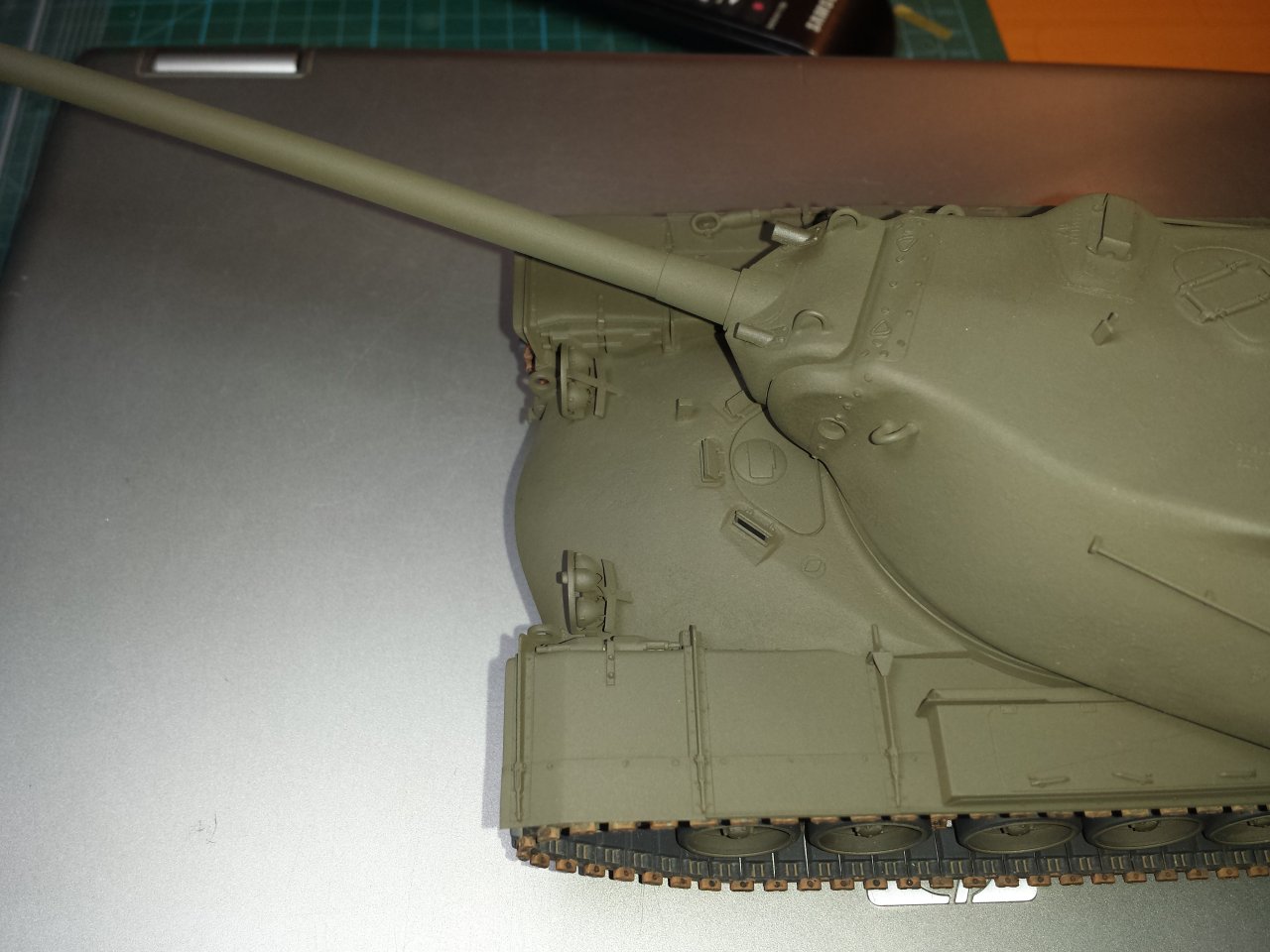 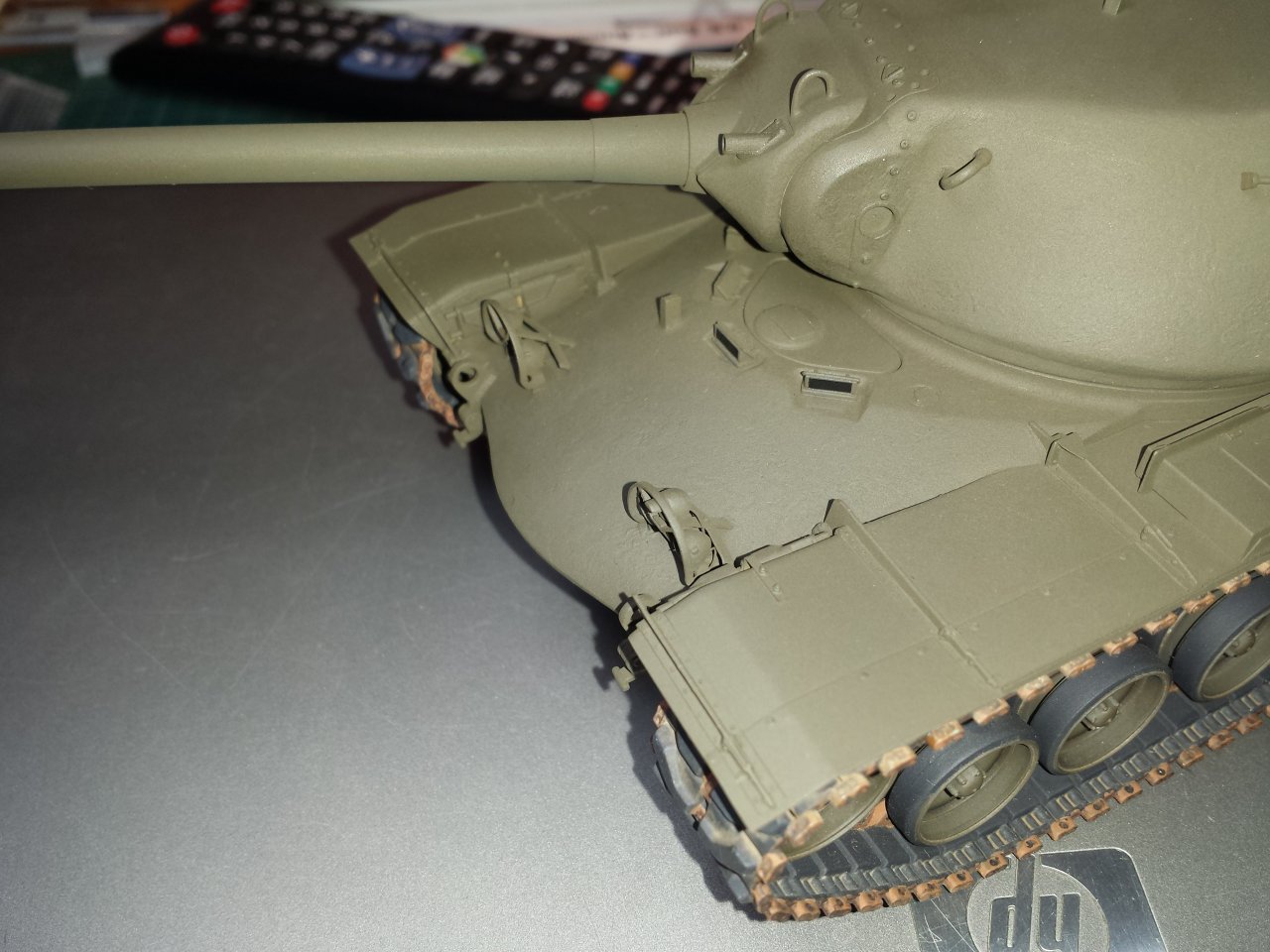 Nice work on this one. Both you and Pawel are brave men to attempt to tackle this clunker.

REPLY & QUOTE
accelr8 (Brian Lockwood) said
i did. what you're seeing is part of the lower hull bulge that in the angle of the photo, makes the "beak" look larger than it is.
BTW, your build looks fantastic!

REPLY & QUOTE
accelr8 (Brian Lockwood) said
I haven't given up in disgust yet. Here's what has been occupying the time- these final drives were the best out of 3 attempts! 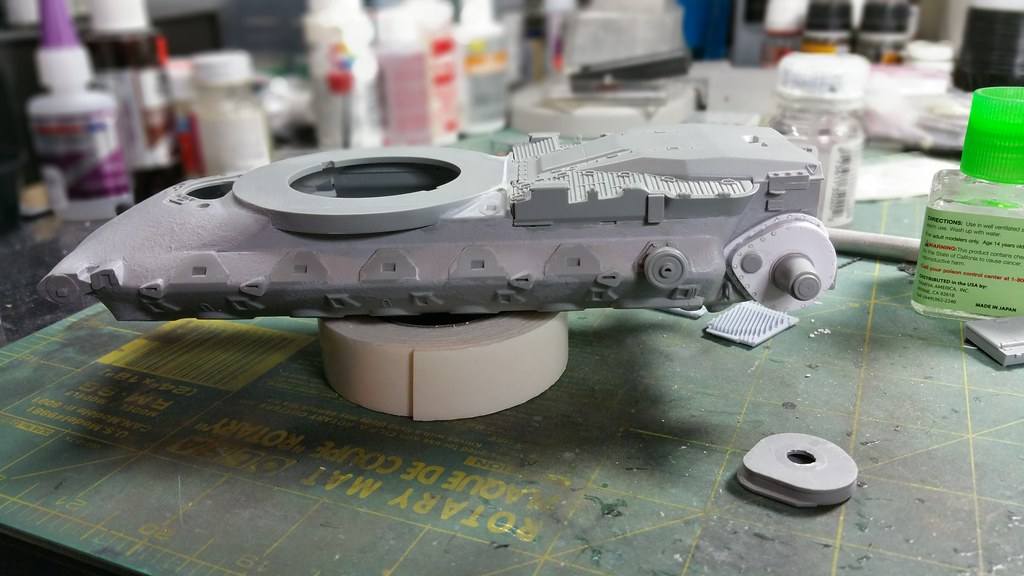 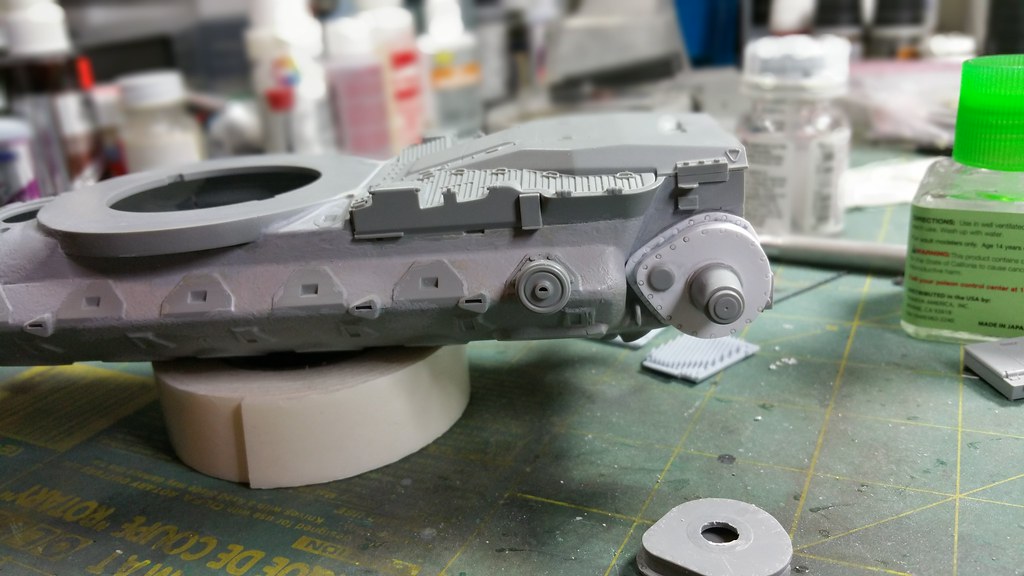 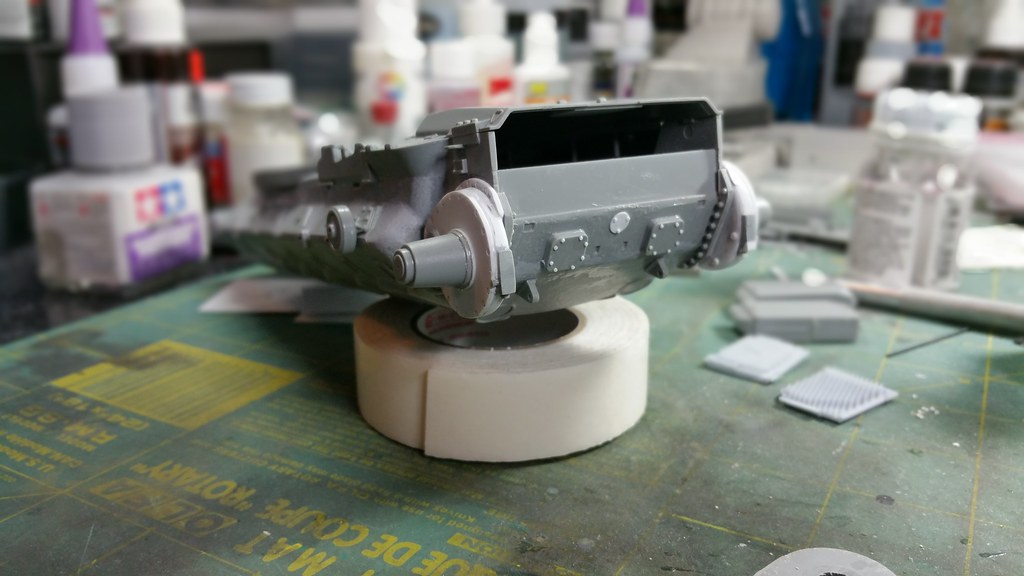 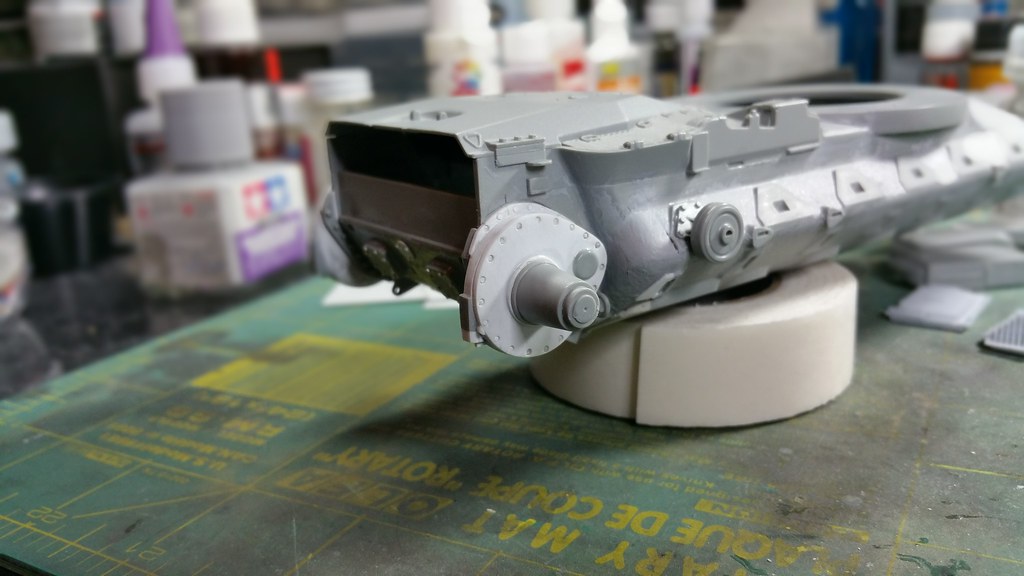 REPLY & QUOTE
Tankrider (John Charvat) said
Brian,
IMHO, scratchbuilding is kinda like a guy describing how many women that they have been with you will have to suibscribe to the "rules of three." Instead of deviding by three to get the right number, with scratchbuilding, it will take three attempts to get said part to be acceptable. If you get it to an acceptable level in one or two tries, your standards are too low.

Nice polishing job on the turd, by the way...

REPLY & QUOTE
Belt_Fed (Jon Murphy) said
Whoever designed this model should be flogged publicly. It really is a slap in the face releasing this model.

I applaud your efforts here, and am watching with interest. I would love to build a 103, but really don't want to hack the thing apart just to get it to look like one.

REPLY & QUOTE
Modelling is not just a hobby, it's an addiction.

REPLY & QUOTE
165thspc (Michael Koenig) said
I do wish there was some way to "flog" model manufactures for some of the poor work they fost upon us. Something more than just not buying the model or flogging them on the pages of the Armorama website.

Once a model is marketed and "out there" the manufacture is defrauding anyone who buys the model trusting only in the model company to have made a good faith effort to "get it right".

The M103 is a prime example of "too many errors to constitue a good faith effort".

Whoever designed this model should be flogged publicly.

Or whoever thinks this is a good kit.

REPLY & QUOTE
accelr8 (Brian Lockwood) said
I've moved on from calling it a turd. If i could change the title of this thread i probably would. But every time i have to scratchbuild or correct something, i just marvel at the level of half-assing that went into the design of this kit. It could have been so much better, and i hope that another manufacturer thinks enough of it to take a better shot at it.

REPLY & QUOTE
165thspc (Michael Koenig) said
Maybe we should create an Armorama "Pillory Page" where particularly heinous model manufacturer's errors are posted and judged innocent or guilty by a panel of modeling peers.

If found guilty the model is permanently posted "in the public square" of this page for all to know and deal with cautiously in the future. (Not the company but the model kit itself!)

p.s. If I were you I wouldn't change the title of this article even if you could. It's great.