Air Campaigns
Want to start or join a group build? This is where to start.
Hosted by Frederick Boucher, Michael Satin
OFFICIAL: Eastern Front Campaign

REPLY & QUOTE
MichaelSatin (Michael Satin) said
Welcome to the Eastern Front Campaign! The is the last in a series of campaigns highlighting the different theaters of operations in WWII to remember the 75th anniversary of the war.

This campaign will run from 1 March through 1 October, 2019.

If you haven't signed up yet, or want to see the rules, go here.

Looking forward to the builds remembering the war from the Baltic to the Black Sea!

REPLY & QUOTE
On the bench:
Sorta depends on your definition of "on the bench"...

REPLY & QUOTE
PasiAhopelto (Pasi Ahopelto) said
Changed my mind, and will do Heinkel He 115 in Finnish service: 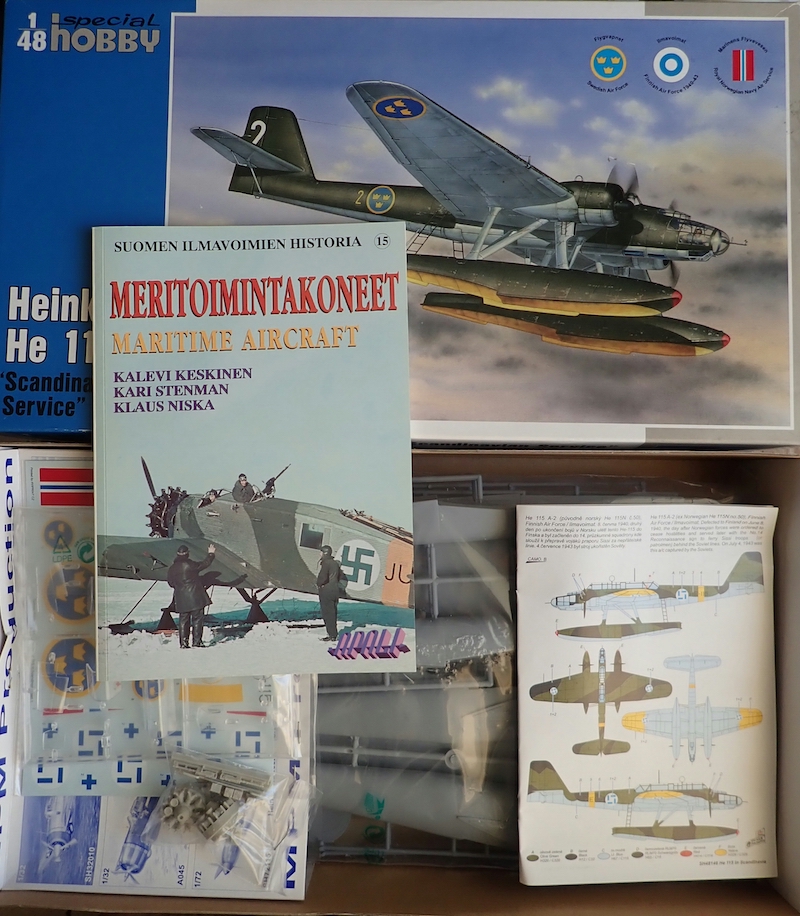 A 1/48 kit by Special Hobby (MPM), and some source material with five useful photos of the plane.

Norway bought and received six He 115s in 1939 and captured two more from Germans. Right before surrender they all were ordered to be flown to Great Britain. One of the planes had technical issue which took a day to solve, after which it was flown to Finland. The plane was interned, disassembled and put to storage.

In mid-1941 it was taken to service as recce plane, but it was soon converted for transport duties. Between 1941 and 1943 it transported long range patrols behind enemy lines. In July 1943 the plane was ambushed when retrieving long range patrol. Pilot managed to take off but after fuel tank explosion he made a forced landing to nearby lake. Crew was captured, and the plane was shot up by Finnish Morane fighters two days later.

This is the kit I'll be building for this campaign. It's a 1/72 Dragon Ferninand, Kit No. 7202. There are markings for only 1 vehicle. 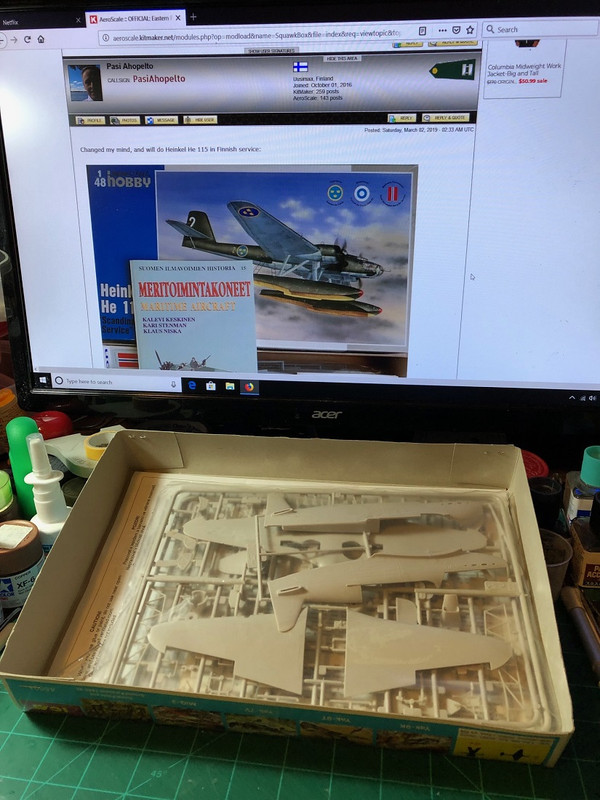 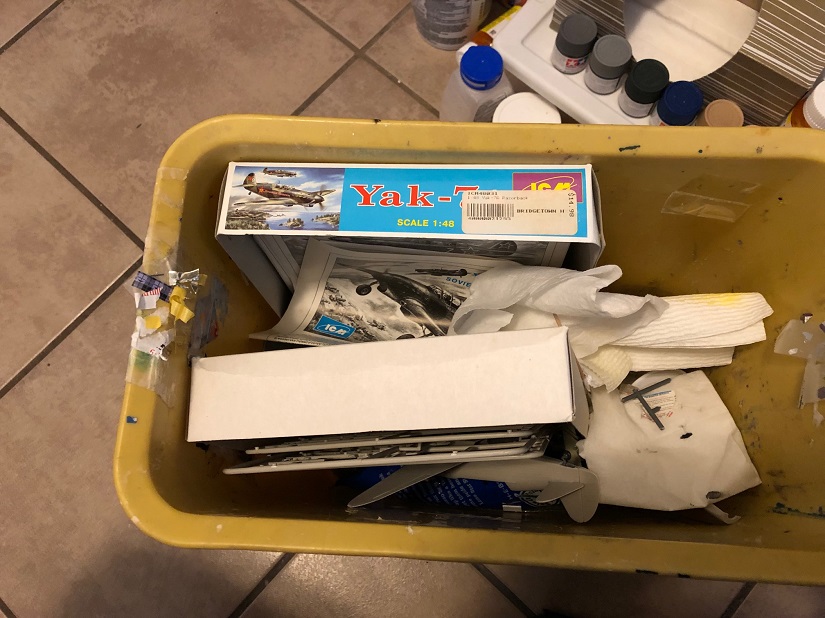 I tossed the ICM kit into the trash.

1. Warped wing pieces.
2. no amount of trimming the cockpit floor would let the fuselage to mate.

3. ORDERED an Eduard Yak-3 to continue the campaign.

Never had the courage to bin one. Should have done it with the Airfix F-5A.

I really like the weatherin' of the trash bin!
Seriously, sorry for that. The Eduard kit should be a better choice.


Have not yet decided what kit I'll do.
Th

REPLY & QUOTE
Sometimes you need to distance yourself to see things clearly - Lao Tzu -
... in scale and in real life -T.

REPLY & QUOTE
c4willy (Chris Wilson) said
Here's a question for the campaign admins I'm thinking of building this kit from Ark of the I-185 it didn't reach production but it did go through combat trials and was accepted for series production but several prototype crashes and possibly the large amount of Aluminium used forced it's cancellation. What do you think gentlemen will it pass muster?

Here's what Wikipaedia had to say on the subject

Flight testing resumed in early 1942 and the M-71-powered versions, which now included the re-engined first prototype, proved to be faster than the Messerschmitt Bf 109F by 47 km/h (29 mph) at sea level and 20 km/h (12 mph) at 6,000 metres (19,685 ft) with a top speed of 630 km/h (390 mph) at that altitude.[5] It was recommended for immediate production, even before it began combat trials in November 1942. All three aircraft were assigned to the 728th Fighter Aviation Regiment of the 3rd Air Army of the Kalinin Front and were tightly controlled to prevent the loss of the prototypes. For example, all sorties had to be flown over Soviet-controlled territory and required the express permission of the 3rd Air Army staff to fly.[6] Pilots' reports were quite enthusiastic; the 728th's commander, Captain Vasilyaka wrote: "The I-185 outclasses both Soviet and foreign aircraft in level speed. It performs aerobatic maneuvers easily, rapidly and vigorously. The I-185 is the best current fighter from the point of control simplicity, speed, maneuverability (especially in climb), armament and survivability." 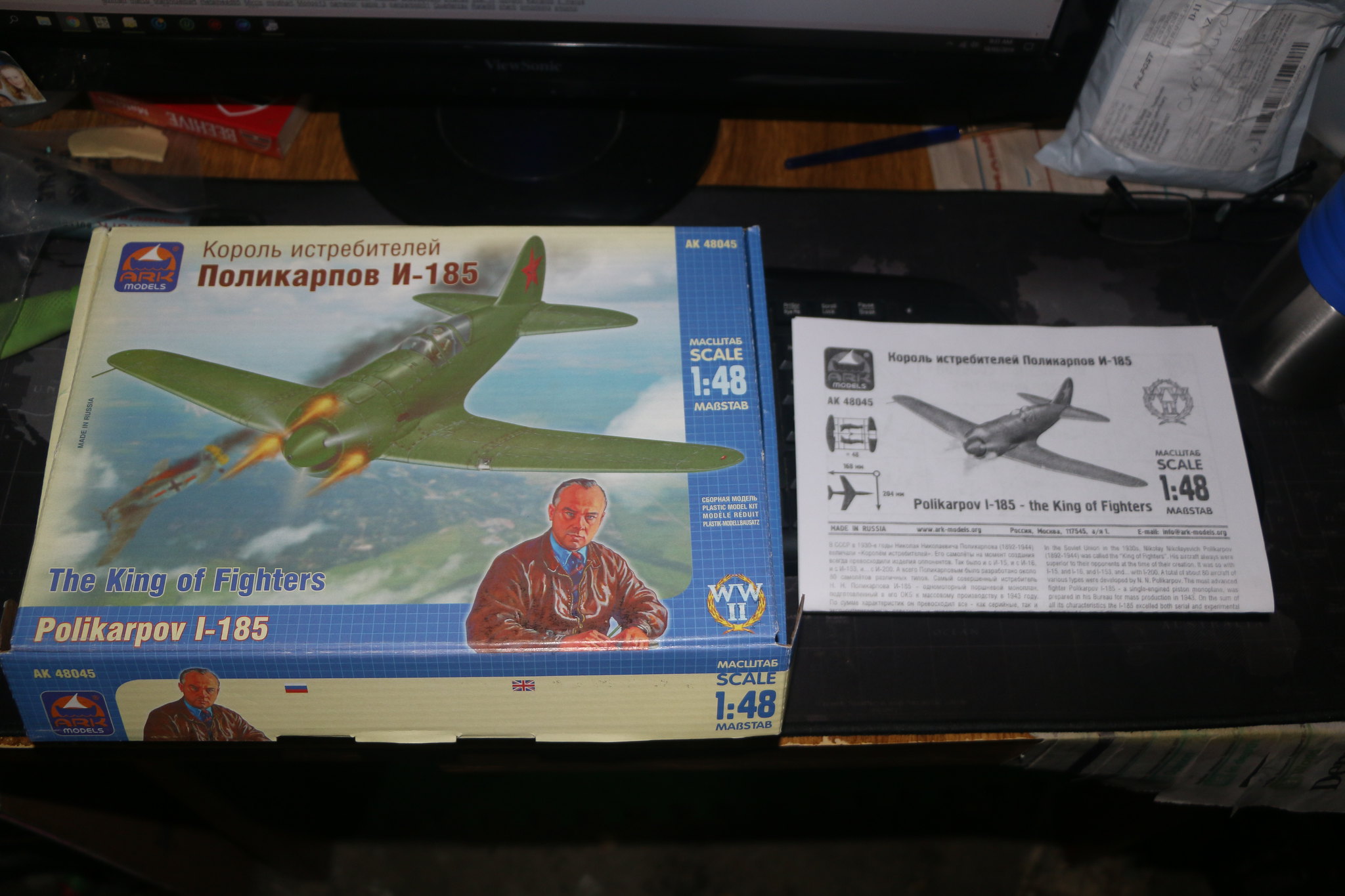 REPLY & QUOTE
MichaelSatin (Michael Satin) said
Sounds like it made it to combat, if not production. I'd say it's good to go. And it sure should be an interesting build!

REPLY & QUOTE
On the bench:
Sorta depends on your definition of "on the bench"...

REPLY & QUOTE
c4willy (Chris Wilson) said
Thanks Michael it's a simple kit but it has some nice exterior details. Should be a quick build..... hopefully. 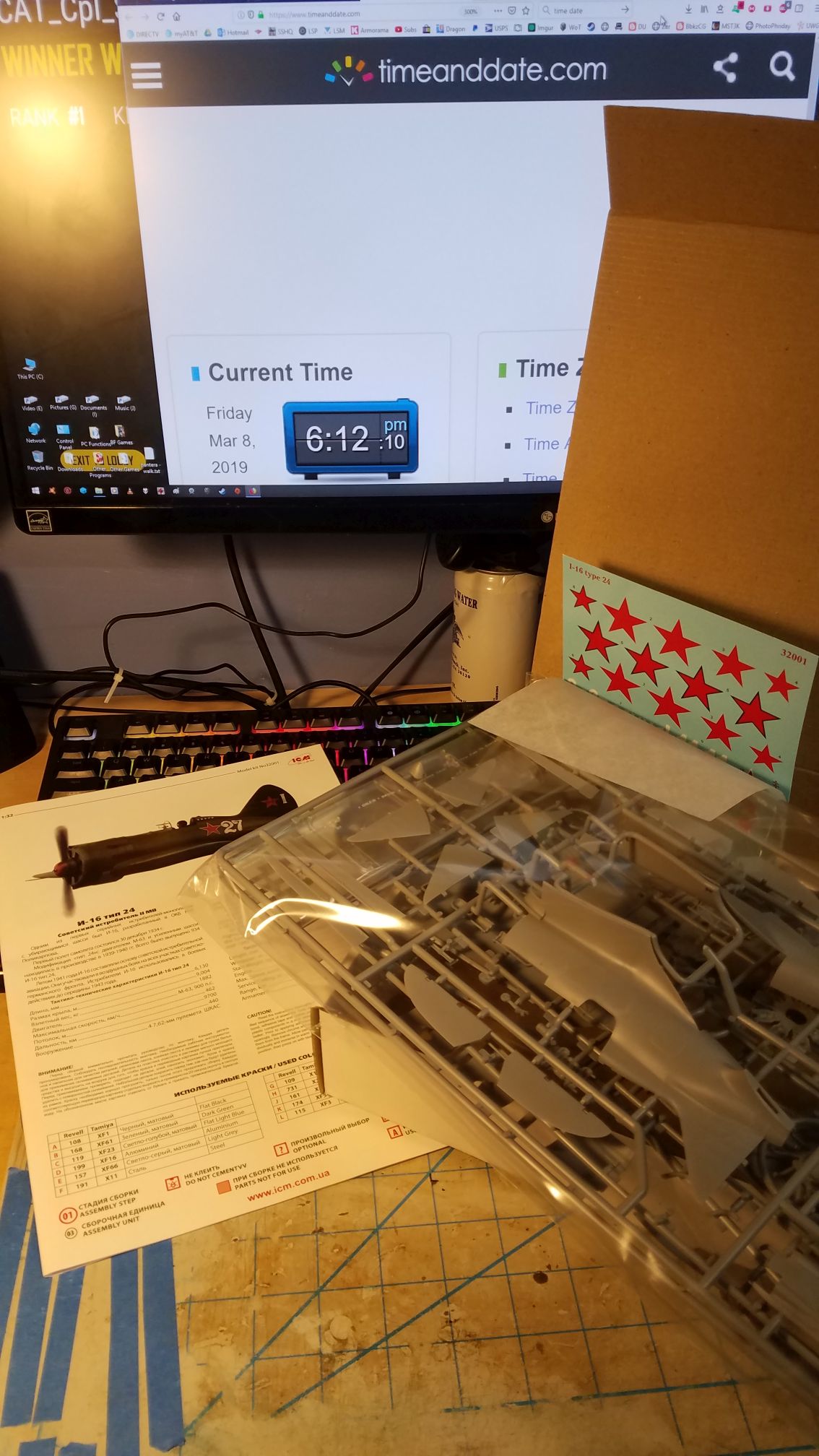 I have gotten to applying interior paint and hitting sub-assemblies and will probably have it zipped up by tomorrow night. This is going to be pretty much a strict OOB job. 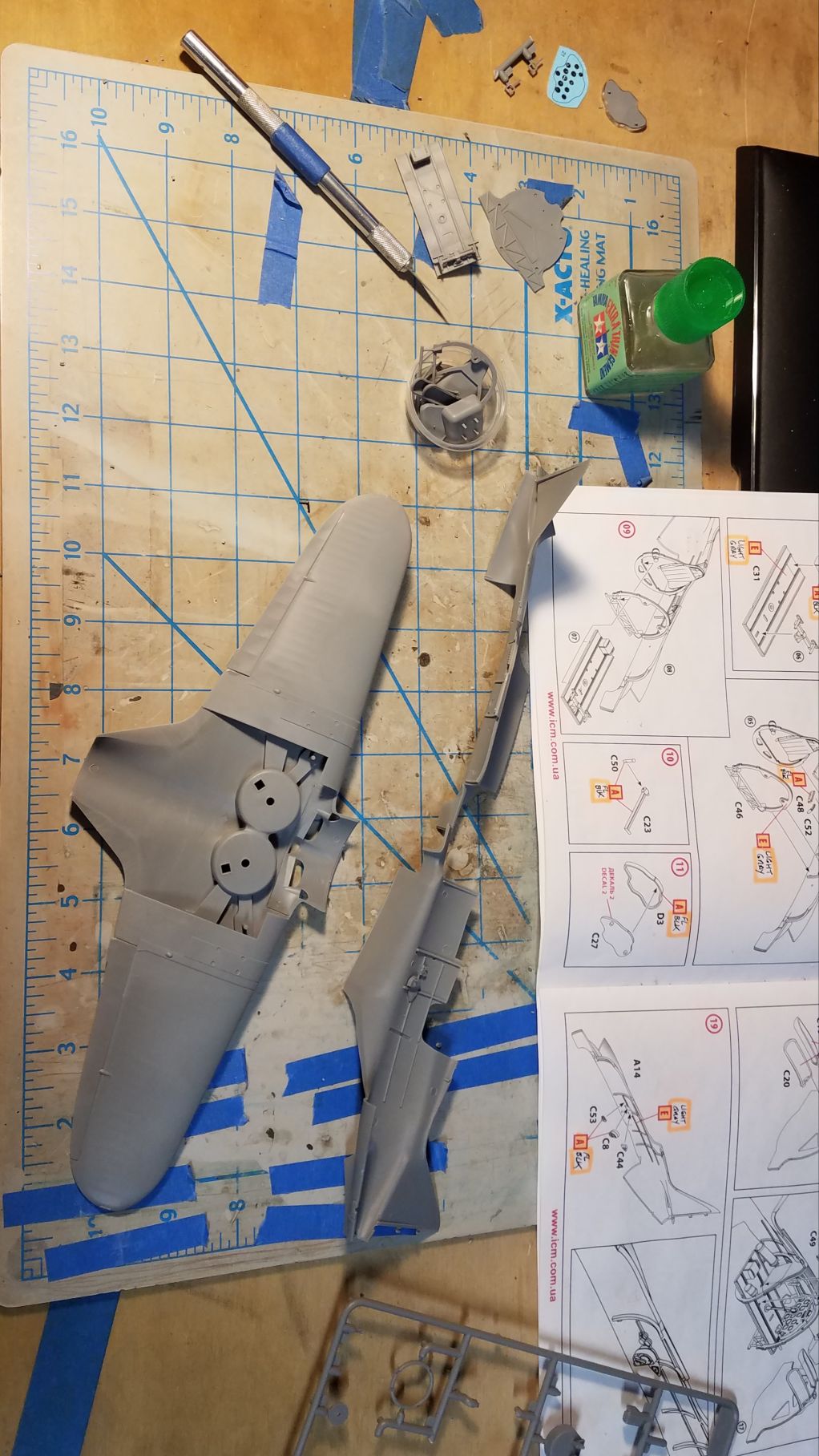 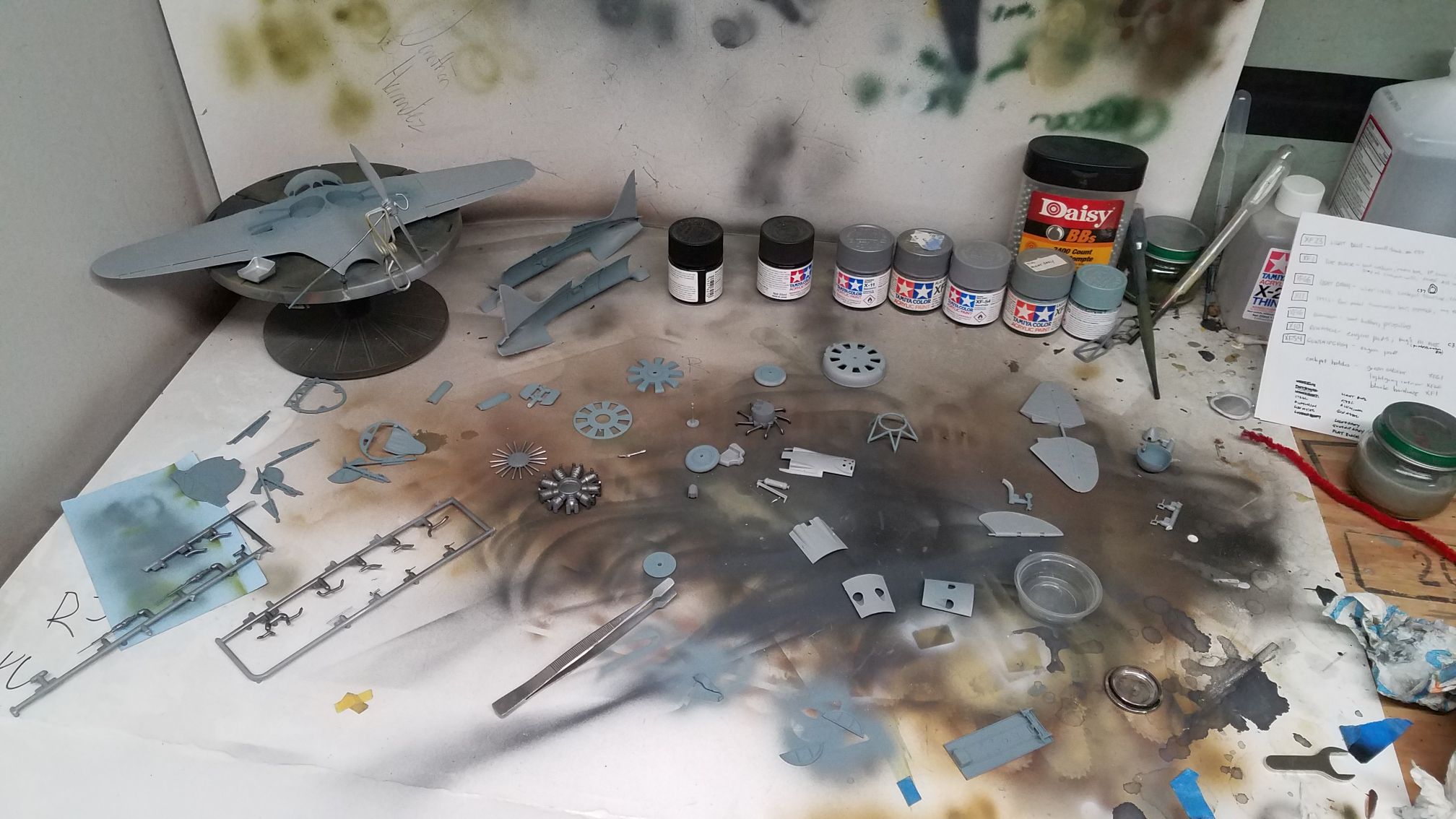 This thing is flying together compared to the Zvezda SdKfz 251 I am also working on.

I pulled the kit out of the trash today and put it in the large parts box.

@ Thomas: The trash can has been around for about 20 years. It has been sprayed, cut, and glue poured on.

@ Shell: You are running away from us with your I16.

REPLY & QUOTE
md72 (Mark Doremus) said
well, it was 46 hours from your start photo till your bin photo. 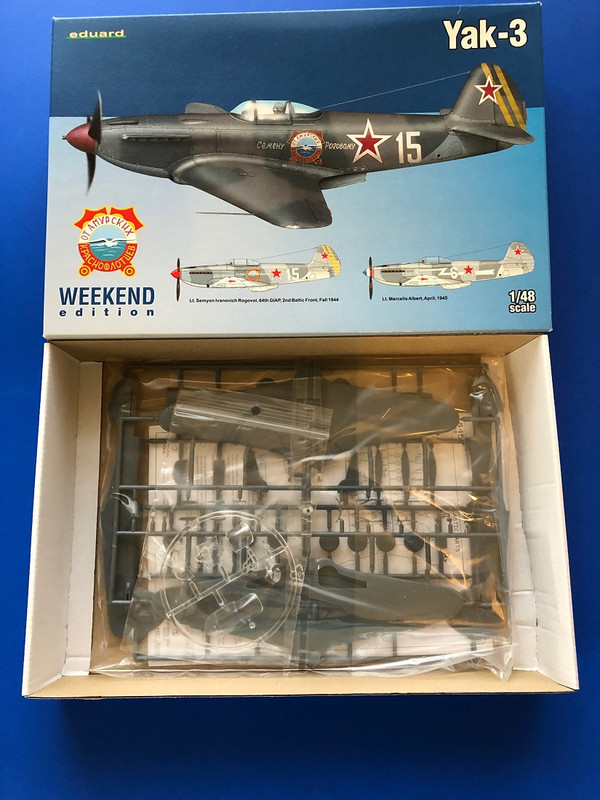 QUESTION: The plans call for a field gray (green/gray) to be applied to the interior, but IPMS STOCKHOLM state a steel gray. Which would be closer to what was used?

REPLY & QUOTE
Bigrip74 (Bob R.) said
I have been working on the Yak 3 and used the decal seat belts on the seat. While the Tamiya Mark Fit was drying I decided to blow on the belts to move some of the liquid, but they blew off to who knows where. So I pulled out the Tamiya tape and made seat belts. 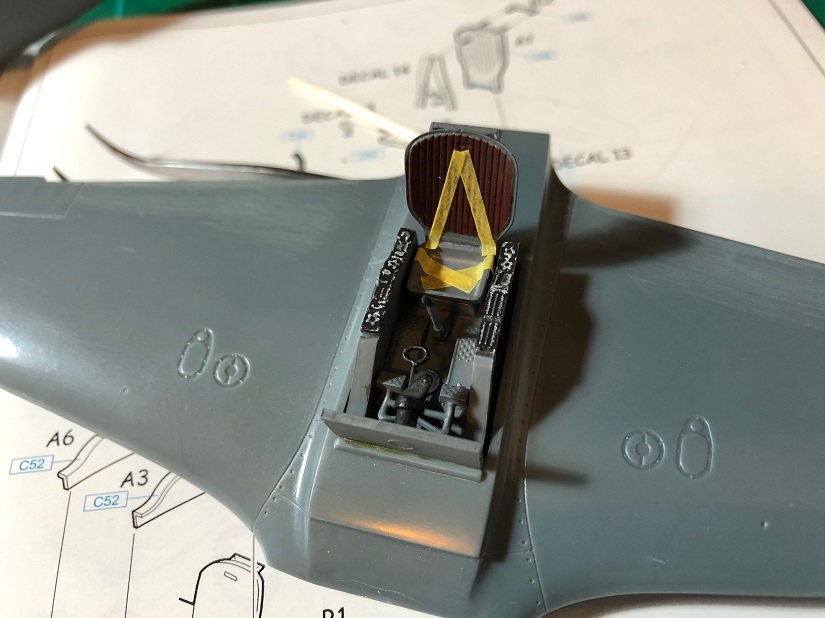 @ Shell: You are running away from us with your I16.


Yes, it's going together quite easily so far. Much better than the Zvezda SdKfz 251 I am working on for another campaign; that thing is a butt. The true test will be when it comes time to seal up the fuselage and attach all the externals.

But you will all get a chance to catch up when it comes time to start masking the camo. I hate masking and usually stall for a bit until I've finished doing all the more fun chores like pruning the hedges and trees, or raking, or doing the brakes on my wife's car.

REPLY & QUOTE
Bigrip74 (Bob R.) said
I was not expecting this Eduard kit to not have locating pins, but it is really going together fast. 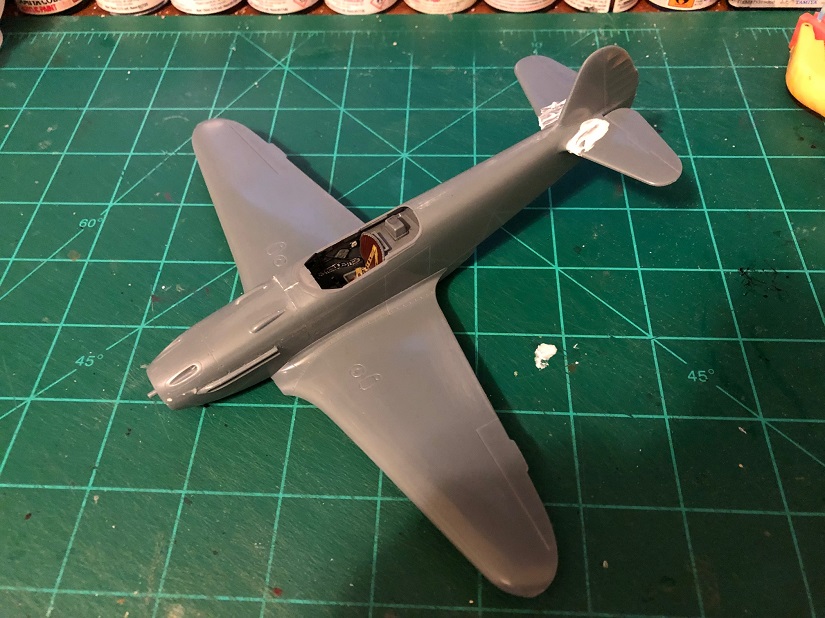 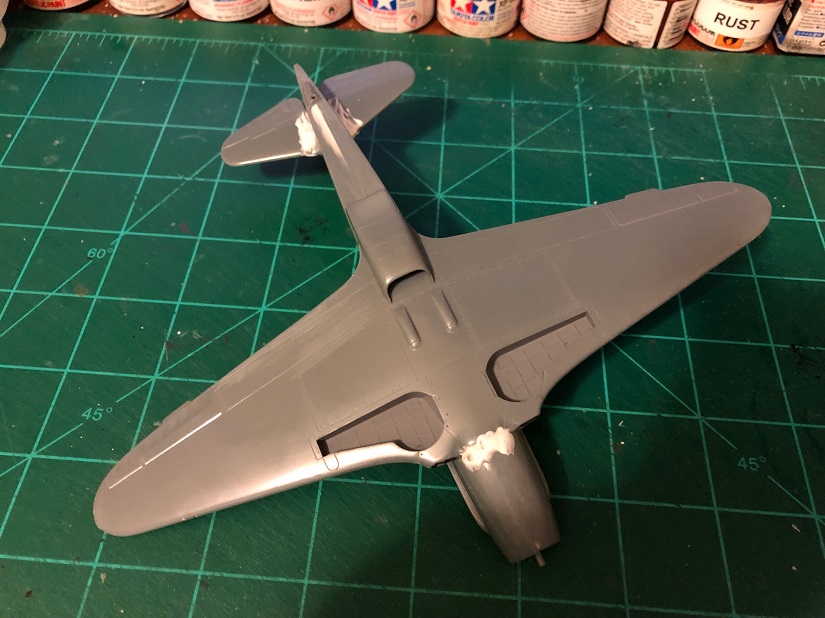 REPLY & QUOTE
FirstSergeant (M. Douglas) said
Greetings,
Here is the before build photo of my Yak-9.

REPLY & QUOTE
c4willy (Chris Wilson) said
Bob there's not a lot of plastic in that Eduard box which is strange for an eduard kit, what's the detail like?

REPLY & QUOTE
Bigrip74 (Bob R.) said
Chris the cockpit is generous and detailed, the instrument panel is nice and could be painted, but I used the decal which came out good. Being a composite a/c wood and metal there should not be a lot of panel lines as in a metal airplane.

The kit is really easy and a fast build the canopy can be displayed open or closed the wheels are OK. The landing gear wells are well detailed for those who would add plumbing.

I only have two gripes:

All in all I like the kit and the outcome.

REPLY & QUOTE
Pave-Hawk (iain) said
Will be attempting to complete this fellow. 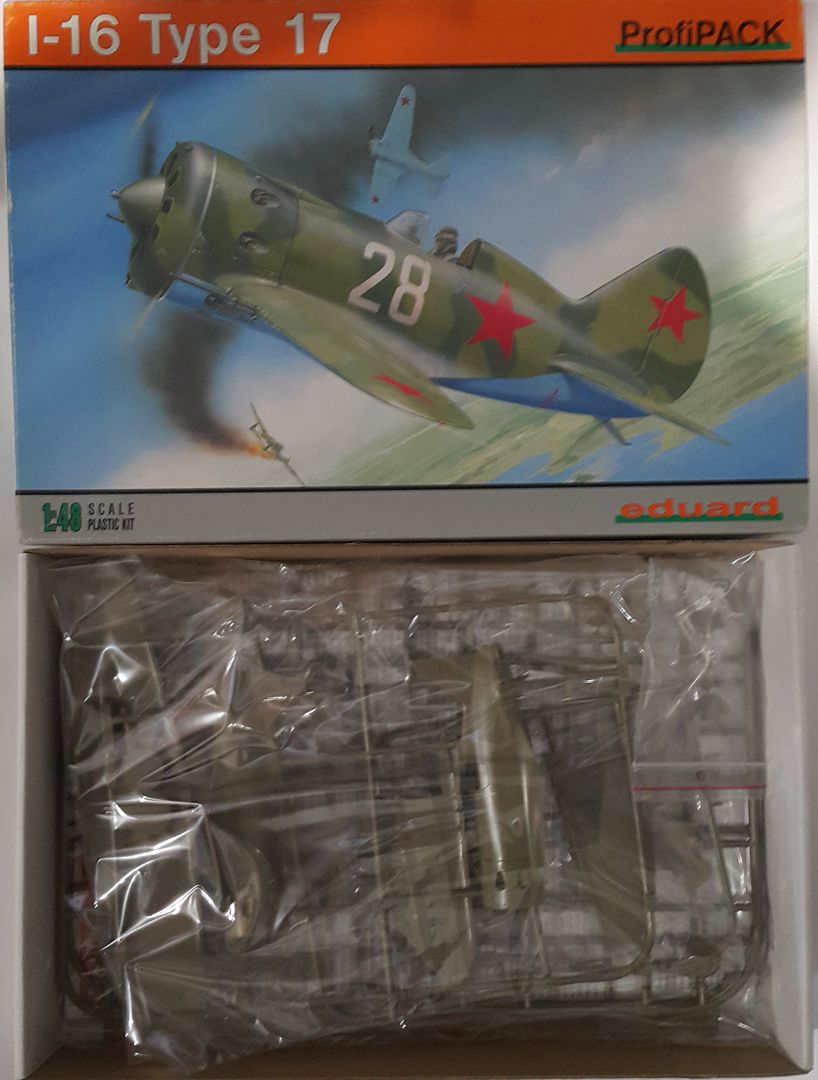 REPLY & QUOTE
Don't you feel more like you do now than you did when you came in? 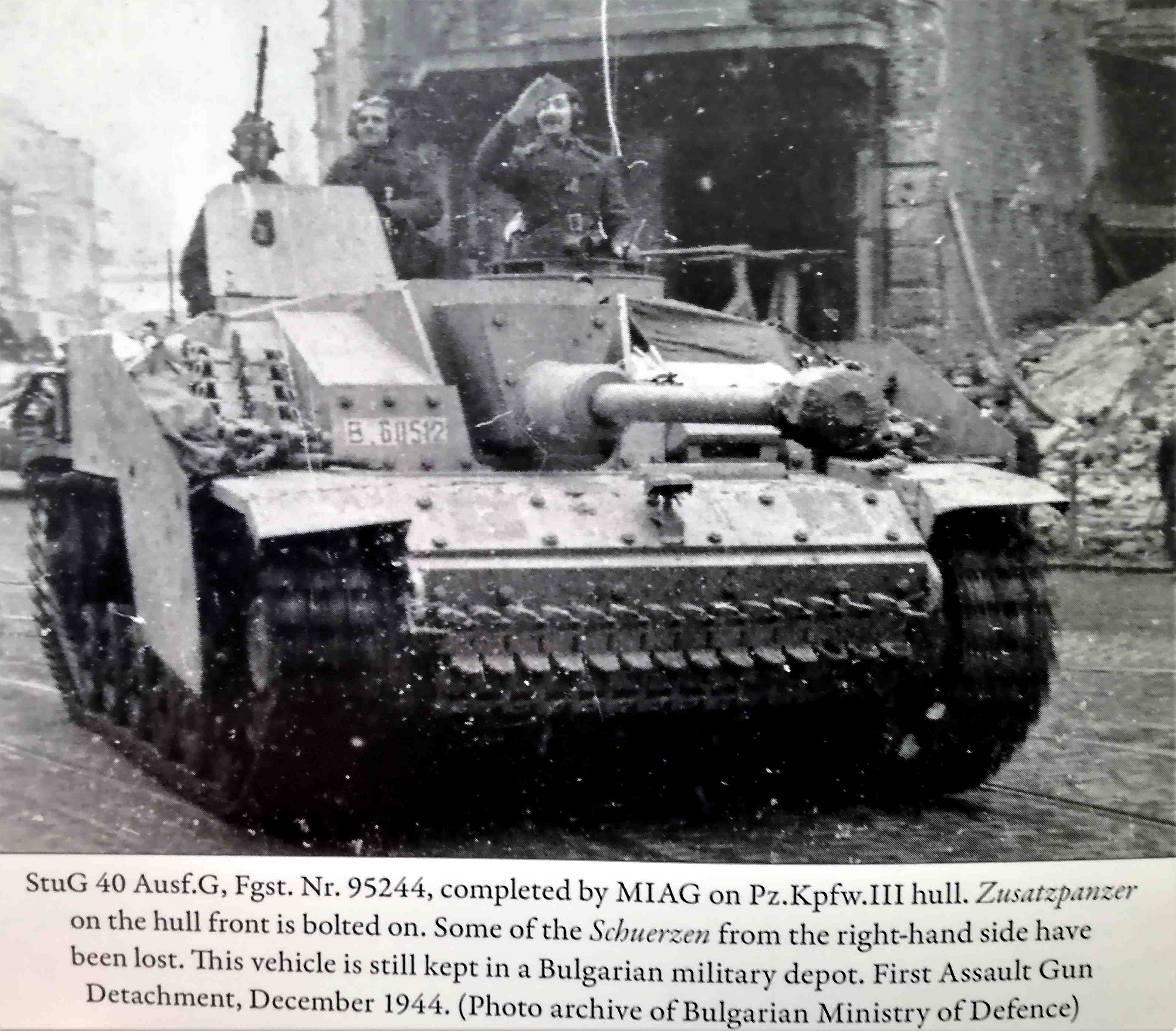 The caption gives additional detail as to Fgst.N and producer.
The vehicle was shipped by Heeres Zeugamt in May 1943, it arrived in Bulgaria in the second decade of July 1943 and was attached to the 1st Assault Gun Battery/ 1st Assault Gun Detachment.

I cannot state, that's the same vehicle, but it comes from same delivery batch.Picture is for discussion purposes only and was taken by me at the Outdoor Exposition of Museum of Battle Glory/Yambol,Bulgaria: 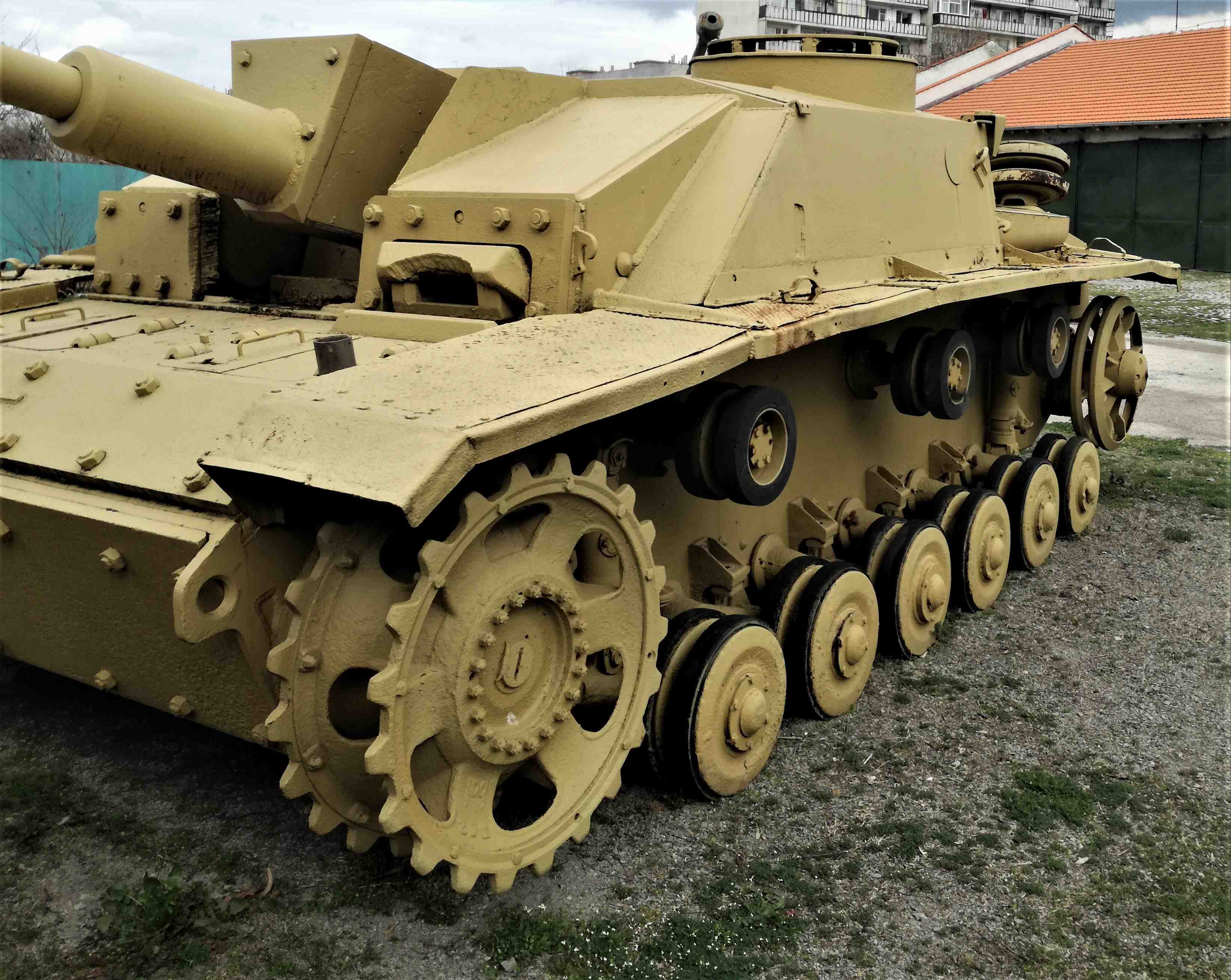 Will build the StuG for this Campaign only, yet-someday- it will proudly sit on a Sd.Kfz.9(FAMO F3) towed Sd.Ah.116 from the same unit.

I've been wanting to join this campaign with the 1:48 scale King Tiger by Tamiya.

Unfortunately I forgot to take a photo of the sprues but I'm hoping that I'm still in compliance with the 25% limit of build progress in particular and the rules in total.

I've applied the Zimmerit with ordinary Tamiya putty and a jewelers screwdriver.

The meshes are PE-parts by Aber.

I'm still working on some better (and more) pics of the finished model.

In the meanwhile here the following ones:

To anyone that has followed what I've built for the anniversary, they'd note that they have not been the conventional birds one would have seen. Initially, I intended to do a Me-110 with all the fixings, but got a bit sidetracked.

I happened along a kit, that sparked my interest in this last installment of the campaigns. Not one that is big on the Eastern Front, my motivation was a bit down. This one lit the spark that seems fitting for me, and promises to be a fun little build!

I'll be doing a Romanian IAR-80, from HobbyBoss. The kit seems to have everything except a decent instrument panel...