REPLY & QUOTE
BogiBg (Bogi) said
This pics were posted by Frenchy in some other Opel Blitz tread here on Armorama. 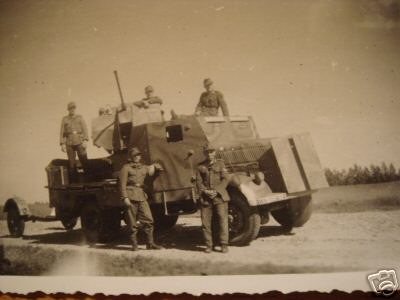 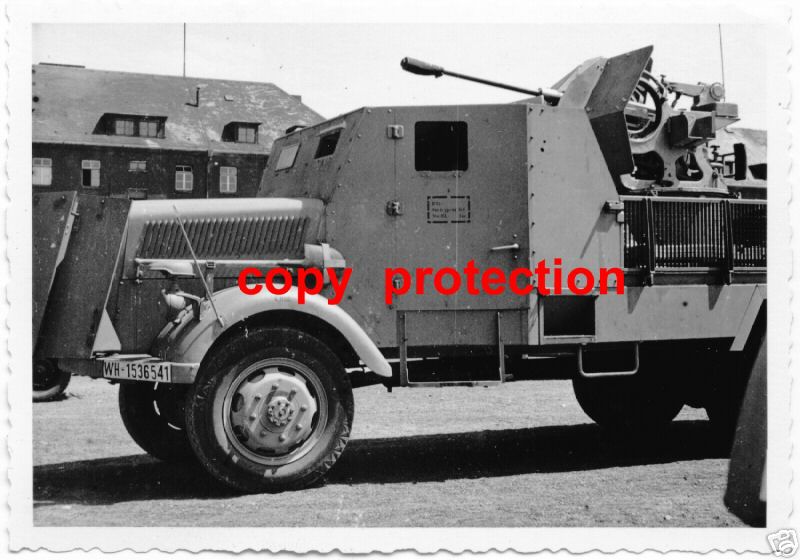 You can see that trucks are type 6700 or 4x4. Although very different from Dragon depiction...

REPLY & QUOTE
165thspc (Michael Koenig) said
Well that brings me ultimately back to my second favorite subject. (Right after wanting/needing a Mack NO.)

Yes, I know Plus Models does it in resin and I do it in my chop-shop but why is no major manufacture doing it?

Counting Italeri we have maybe 3-4 hobby companies doing exactly the SAME 2x4 kit. You would think it would occur to one of them to want to stand out in the crowd!

REPLY & QUOTE
panzerbob01 (Bob Woodman) said
The pics posted by BogiBg are those rare pics I mentioned showing the rather "formalized - looking" armored FlaK Blitz - it is of course quite a different beast then that being kitted... Note that the pics show a FlaK 38... probably simply placed on that bed (no "FlaK sledge" is clearly evident... AND note the towed Sd.An.52 trailer for the gun! So this truck was NOT evidently built with a specialized bed with some actual mount incorporated.

@Mike K.; LOTS of us are eagerly waiting for some good company to break out of the old 4x2 Blitz mold (pun intended) and bring out a nice 4x4 version. Of course, us waiters have been waiting for a long time, and there's no hint on the horizon that our wait will end anytime soon!

A nice styrene 4x4 3-ton Blitz chassis would open up many possible new kit doors for the opportunistic company looking for a nice potential line-up of something not yet explored in 1/35 styrene kits - that new line could even... include that cool-looking armored 4x4 FlaK Blitz seen in BogiBg's posted pics!

I, for one, would buy THAT.

REPLY & QUOTE
panzerbob01 (Bob Woodman) said
And maybe, for those seemingly strongly hung up about the supposed carry-capacity of the Opel Blitz 3-ton - 4x2 OR 4x4 - perhaps there is something "telling" about that armored 4x4 FlaK truck...

It apparently was set up - at least as photographed - to carry that 2cm FlaK 38 single-barrel gun. The Germans already understood quite well the limitations of that gun as an anti-air weapon by mid-1942. It didn't track fast enough to engage close-in aircraft, it didn't have enough range to engage modern planes before those planes got within their gun range, and it didn't have anything like sufficient fire-power (small projectiles, slow mechanical rate of fire, further slowed down by using small mags, and prone to getting quite hot quite fast during firing) to effectively take on the heavier aerial killers such as the Stormovik (sp?), etc. And the (much heavier...) 3.7cm FlaK 37 and later the FlaK 43 guns were available (and much more effective, too). And the FlaK-vierling 38 (again heavier) was also available. Yet, in reality, what we see is that this armored truck apparently was slated for that less-effective weapon - and, in truth, there were very few FlaKvierlings, and very few 3.7cm guns ever mounted on these Blitzes.

Our very interesting debate about 4x4 vrs 4x2, load capacity, etc. aside, I would bet that those Germans actually KNEW what they were about when doing these conversions. They had had, as early as May, 1940, plenty of unfortunate experience with trying to actually put guns on "anything that moved".

Just some food for thought.

REPLY & QUOTE
m4sherman (randall neeley) said
An observation about driving a similar truck. I had a 134 inch wheel base 1940 GMC running on 20 inch wheels and rated for 3/4 ton. The engines I used were a 302 inline 6, and later a 292 inline 6, both similar to the engine in the Opel trucks. I had the truck set up as a captured truck used by the Germans in Europe. By the time I got it the original engine and gear box were long gone, so the truck had more power than the original.

The front axle load was light, and even with 60 year old components it was easy to steer. I don't believe the added weight of the armor would have made the truck harder to control. The limitation would be if the front tires were wide enough for the added loading during off road operation.

The rear springs were just like the late war Opel springs. I once loaded up the truck with 2 tons of gravel and the weight barely compressed the springs. Not bad for a 3/4 ton rated truck.

I was going to try it on myself and go stealth, but it only works on other users.
« Back12Next »