REPLY & QUOTE
mmarchioli (Mike Marchioli) said
Hi guys! Another silly question about the Panzer III. I've been doing a little research and have seemed to get mixed results. Does any one know if the Panzer III M was used in the german defense of Normandy?

Here's an Ausf. F in Normandy : 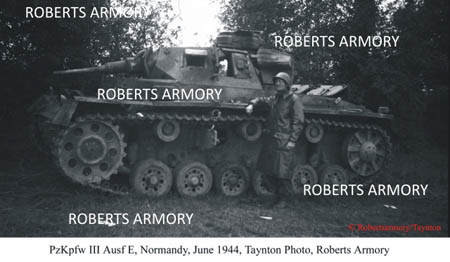 Hi guys! Another silly question about the Panzer III. I've been doing a little research and have seemed to get mixed results. Does any one know if the Panzer III M was used in the german defense of Normandy?

I'm not 100% sure if any "M"s were used in the defense of German positions in Normandy, since only 666 of them were built during 1942-'43. Most were shipped to the Russian Front, and a number of them were converted into Ausf.Ns, which as you probably know, were mostly used as infantry-support vehicles.

My guess regarding the "M" being used in Normandy would probably be a somewhat "guarded no", but as soon as one makes a guess one way or another, sure as dog-poo stinks, photographic evidence will come up to prove otherwise...

I haven't seen or read anything to prove the "M" having been used in Normandy-defense, but bear in mind that the Germans were also known to use a few old 1940 French Tanks in Normandy, June, 1944. Virtually ANYTHING is possible, theoretically speaking of course...

Hi guys! Another silly question about the Panzer III. I've been doing a little research and have seemed to get mixed results. Does any one know if the Panzer III M was used in the german defense of Normandy?

The German Panzer Divisions in Normandy had officially traded in their Panzer IIIs for Panthers long before the invasion. US accounts do list a small number of Panzer IIIs destroyed in France, but most were probably training vehicles swept up in combat. Some are shown in the Panzer Wrecks series of photo books.
If a Panzer or Panzergrenadier Division's Panzer Regiment did not receive a full complement of Panzer IVs, they may have held onto a few Panzer IIIs so they would be nominally "at strength," pending delivery of the correct vehicles.
The two photos posted above appear to be a Panzer III Ausf. J and an Ausf. H.

REPLY & QUOTE
nsjohn (Norman S Johnston) said
There would appear to have been some Mark111 with 21st PzDiv,and also with 116th PzDiv. The 21st is not a surprise as it had an eclectic collection of vehicles, many based on captured French chassis and also some Mark 4s with the short barreled 75mm gun, but the 116th was a more conventional division. Whether the Mark 111 were Ausf j,k,l,M or N is difficult to determine as German records did not tend to record such details. It is also the case that any earlier vehicles still surviving at this stage would likely have been at least partially upgraded. A good example of this is the Tank Museums Mark 4 which is an Ausf D but which sports a long 75 which was fitted when it had been returned to the factory for repair or maintenance

Looks like the 116 Panzer Division used a few Pz IIIs there. Don't know what variant though....

Here's an Ausf. F in Normandy :


"The PROOF Is In The Pudding", as the saying goes! I was getting pretty curious over this question, myself! It stands to reason that Ausf.Ms could very well have been used in Normandy, after all!

Thank You Henri-Pierre, Gerald and Norman!

REPLY & QUOTE
mmarchioli (Mike Marchioli) said
Thanks guys. I am looking to make a dio using a MiniArt Dio kit and some 101st Airborne figures that I had and have been struggling to find the proper vehicle for it. Everything I have that fits the proper timeframe is either too small or too big. A panzer III chase seemed to fill it out just right. But I also have a Panzer IV Ausf H in the stash that fits pretty well too so I will use that instead. Its just a squidge tight.

Thanks again! Always appreciate the help!

If you're keeping your figures as 101st Airborne in Normandy then your choices are quite limited (82nd gives you a little more score perhaps).

Niels Henkemans prepared some articles over on ML à few years agô on the latter.

REPLY & QUOTE
jrutman (jerry rutman) said
Also consider the possibility of a PzIII used as a beobachtung vehicle for self propelled arty elements using Wespe or Hummel. This was a common thing and might be found still in use in June44.
Never say never is the view to keep in mind.
The HJ still had several PzIIs in it's inventory during the Normandy battles for instance.
J
J

REPLY & QUOTE
Biggles2 said
Some references list the 21st Pz Div as having at least one command Pz lll L in Battle Group 03 of the 1st Abteilung, 22nd Pz Regiment, in Normandy during June 1944.