REPLY & QUOTE
bill_c (Bill Cross) said
Anyone (Frenchy?) have photos of the Büssing-NAG Type 4500 A engine with its wiring shown or a wiring schematic? TIA. 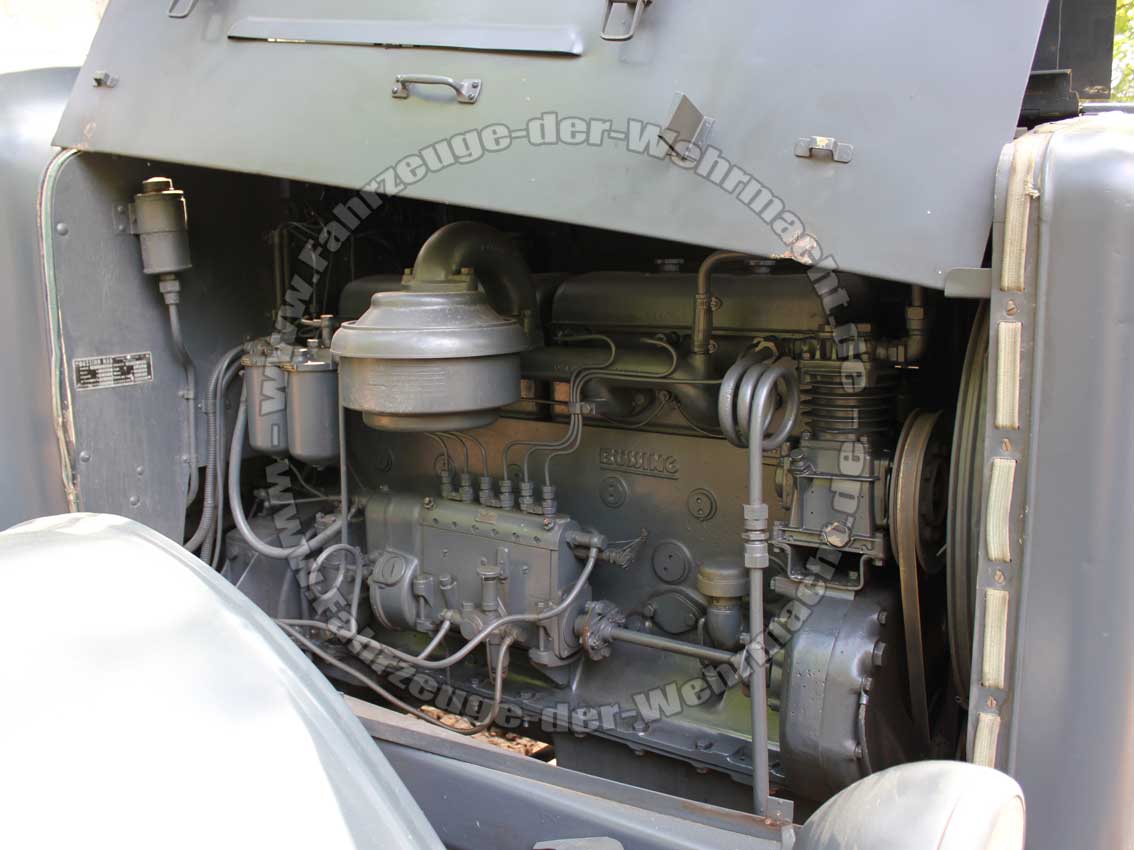 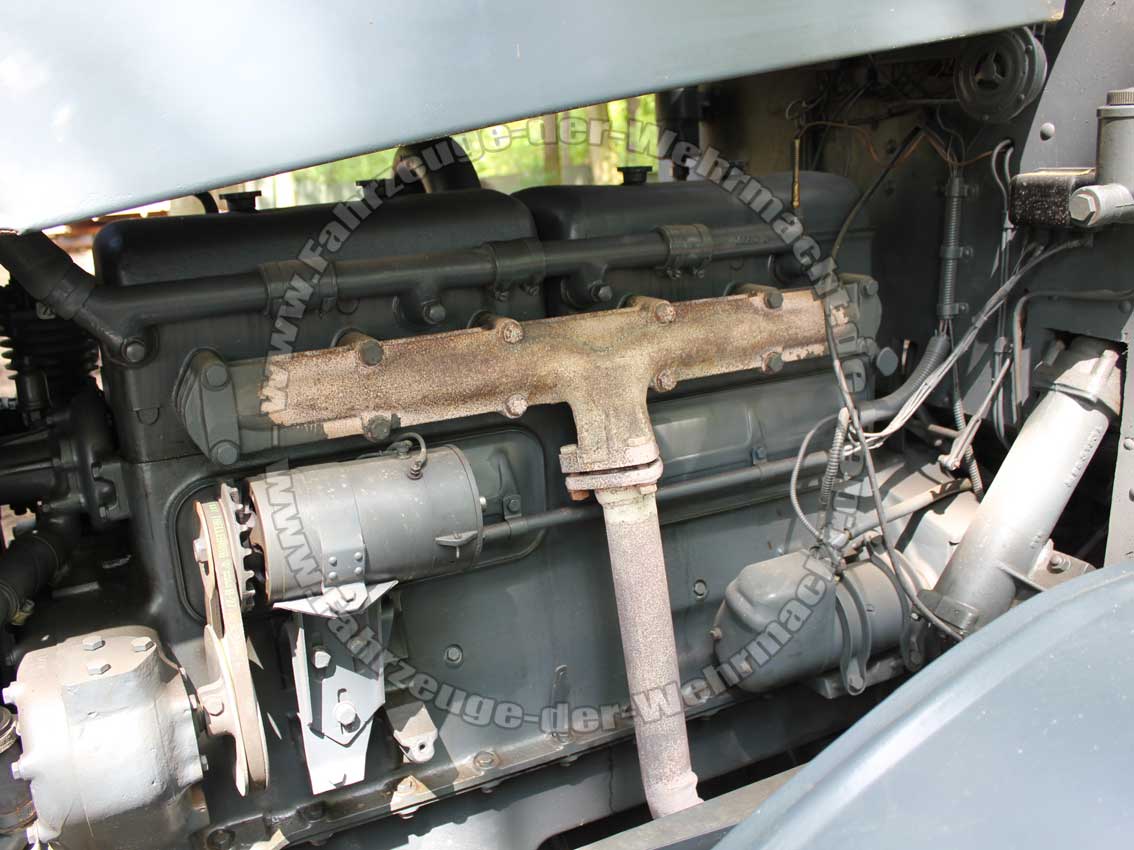 These two come from Panzerserra's blog : 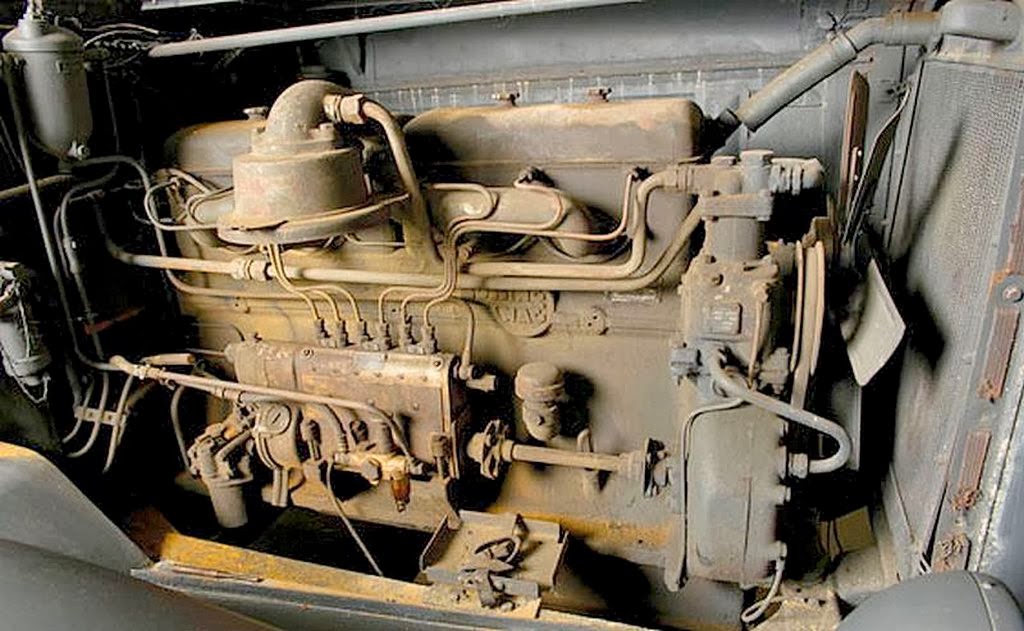 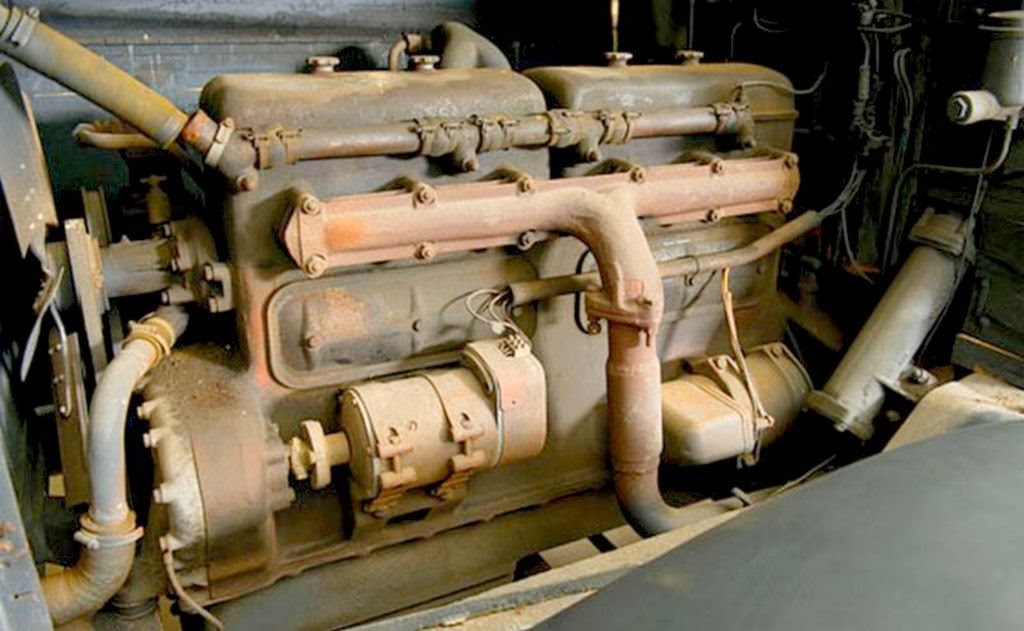 REPLY & QUOTE
SpeedyJ (Robert Jan) said
If you want more, just call my name.
Angel provided me a very detailed manual for both A & S type some time ago.
I simply love the Büssing NAG models.
Screen shots from the manual. 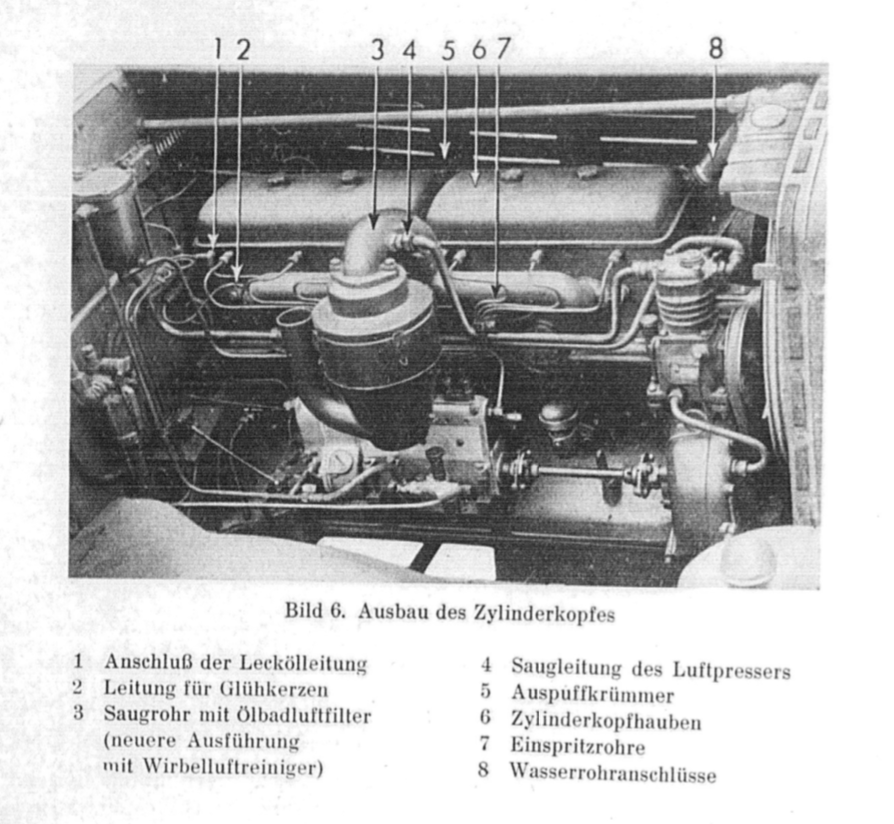 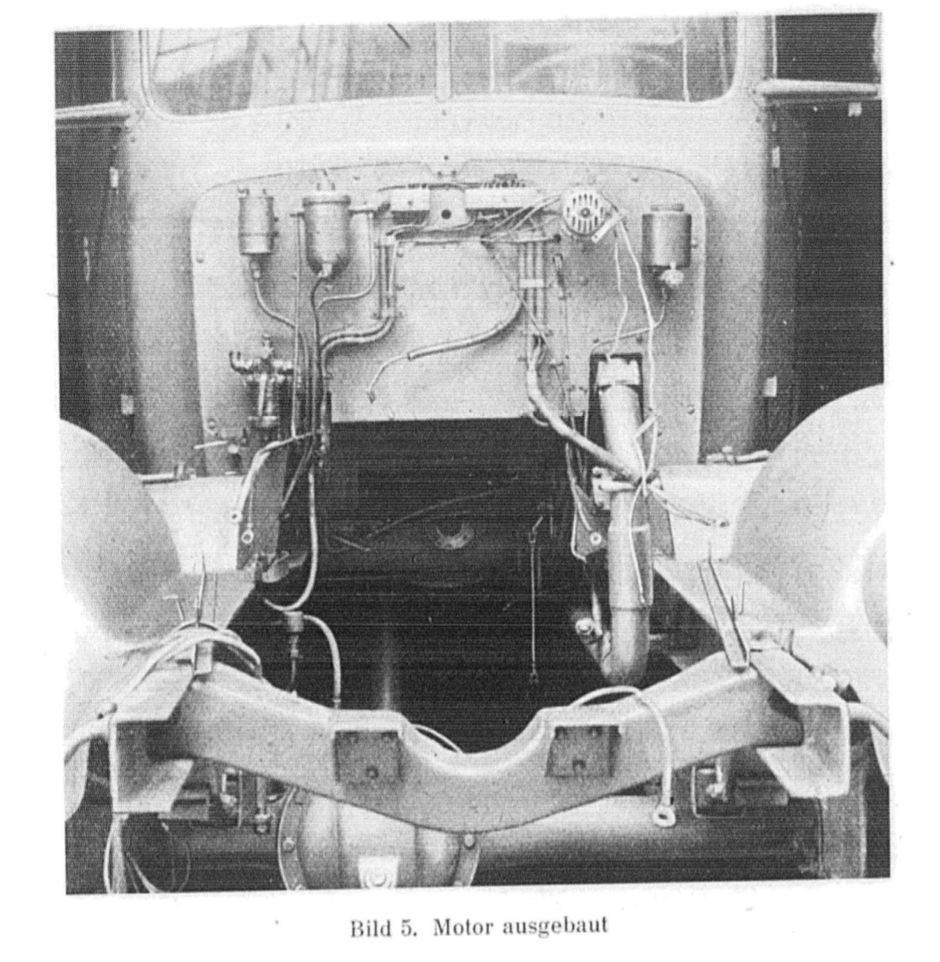 For sure it wasn't me giving you the Manual, as I don't have it.
IIRC it was the owner of Panzer Concepts, who send it to you with your Kfz.415 conversion.

Has anyone here built the AFV Club kit?
Dan

I am building it right now. It's excellent with great fit and only a few issues. Very fiddly with lots of detail, though.

REPLY & QUOTE
panamadan (Dan) said
Thanks Bill.
It looks to be a busy kit.

REPLY & QUOTE
SpeedyJ (Robert Jan) said
Building the l4500A with Bilstein crane right now. Blows a modeler away with details. And the kits are not that pricy any more.

REPLY & QUOTE
bill_c (Bill Cross) said
Yes, it's VERY busy, but the 1-1 was busy with lots of details. This is one of the best kits I have built in a long time. Some of the plastic is a bit brittle, so be cautious lest the carpet monster eat some parts.

REPLY & QUOTE
panamadan (Dan) said
I wish the kit had a tarp option as it seems quite common.
Dan

I wish the kit had a tarp option as it seems quite common.

I am building the Bilstein crane variant which doesn't call out for a tarp.

Honestly, after years and years trying to find good styrene or resin canvas covers to softskins, you're better off making your own from tissue paper and white glue.

I am building the Bilstein crane variant which doesn't call out for a tarp.


I also have this kit. In the field of service-related vehicles it has always stood out to me, as most kits are cargo or personnel transport of some kind and this being a tow truck--and a German one at that--I knew I had to eventually have it on my shelf and was pretty stoked when I found one at a ridiculous price on ebay.

Will you post any notes on your undertaking; maybe point out some of those fiddly bits you mentioned (nudge nudge wink wink)?

REPLY & QUOTE
SpeedyJ (Robert Jan) said
I will share some building pictures on this thread. Already build the L4500S and a lot of detail is covered. For the Crane version I do a different version, so might be interesting.

Will you post any notes on your undertaking; maybe point out some of those fiddly bits you mentioned (nudge nudge wink wink)?

In general, there are a LOT of tiny pieces that can become separated from the sprue trees. Be sure to remove any loosely-hanging parts and put them aside. It's better than having them fall off and disappear into the carpet monster.

There are a lot of knock-out holes, especially on flat parts like the tool shed or the base of the platform. Unfortunately they are supposed to represent wood, so removing them will mean having to restore the "grain." But not all of these surfaces will be visible unless you build the doors open. Plan ahead before driving yourself crazy with work to see if you can just cover the defects up. This isn't possible on the underside of the platform, but again, if you're a stickler for detail, you will want to remove them.

If you are going to show the engine, I suggest adding the wiring before you seat it. There is an extensive amount of detailing on the firewall that would do well with the addition of wires and piping. I didn't get the wiring diagram on this thread in time to do that, so I will close up the bonnet and not show the exquisitely-detailed engine.

I recommend a set of resin tires over the vinyl in the kit. They not only look better, but hold up better over time. DEF Model makes very good resin replacements, but they don't always "marry" to the kit parts well. In this case, they are a perfect match.

The exhaust pipe attaches to a bracket on the rear left side of the vehicle. The instructions ask you to put it on early; DON'T. You will break it off repeatedly handling the chassis as I did, finally losing the bracket entirely and having to scratch a replacement. Cement it on near the end of your build. I recommend the same for the NOTEK lamp that mounts to the front bumper.

The cab goes together with minimal issues, but there are strange to say no decals provided for the instrument dials. AFV Club's painting suggestions are ridiculously simple-minded, so I recommend some Archer dry transfers. You actually rub them onto some wet transfer paper, soak briefly in water, and then slide onto the dials like ordinary decals. I used some leftovers from their Sd.Kfz. 9 (FAMO) set because they were close enough, and the cab will be shown closed up on my build.

When assembling the rear chassis (which is made up of a series of stacked "metal" beams), but sure to pay close attention to the way successive layers are added with bolts, plates and rods. Also be very careful about the alignment as a lack of care will mean the rods won't line up with the holes in the "plates" molded onto the beams.

The various stowage, lines, etc. are held down with brackets. These brackets are EXTREMELY fiddly, and care should be taken when removing them from the sprue tree. They also lack any latches, so I recommend investing in a set of styrene "butterly" latches.

The tube middle section of the crane itself has very thin walls, so be careful when gluing the two halves together lest they buckle from too much cement. Pay attention that some of the crane parts are NOT GLUED. I made the mistake of gluing one of the armatures and had to backtrack. Fortunately it came off without destroying the part and I can make it move freely after a little sanding of the contact points.

I haven't finished the build, so there's the nitty gritty up to now. HTH.

REPLY & QUOTE
SpeedyJ (Robert Jan) said
That's a very nice list you provided Bill. Kit has some pitfalls which certainly makes such a build frustrating. I in person think that AFV Club parts sometimes are too small / thin where PE would be helpful for strength.

I'm rather busy now, will post as said some pics over the weekend.

I in person think that AFV Club parts sometimes are too small / thin where PE would be helpful for strength.

As I was building the kit, I thought about whether PE brackets would be better, but believe the HUGE amount of work bending the brass AND centering the brackets would be onerous. Like I said, a few butterfly latches should greatly improve the look of parts that are not that prominent and certainly very tiny in the scheme of things.