Campaigns: Completed Campaigns
Campaigns that are completed should be grouped here.
Hosted by Richard S.
The Other Guys!

REPLY & QUOTE
goofmuilwijk (Goof Muilwijk) said
It took a while to get the little Wz painted. After first airbrushing the car green, i then tried to get the camouflage pattern on it. This turned out to be easy enough, but the road to that conclusion was a bit more difficult.

The camouflage pattern comes from: http://derela.republika.pl/wz34.htm
First i tried to draw the pattern with a pencil. I did that on one side of the car. Then i brush-painted the colors. This didn't cover well. So after 2 layers i decided there had to be a better way. Since the camo-colors have a black demarcation line between them, i thought i could just airbrush them on. A little overspray wouldn't be too hard to cover up with the black line. This didn't turn out very well. I overestimated my airbrush skills a bit. That and Mig's ammo didn't fire from my gun as well as i thought it would

For the demarcation lines i used a fine-liner felt pen. In retrospect i should have used the fine one, instead of the medium one. But on the test piece the medium looked better.

The decals (all 2 of them) suffered from age and a very thin carrier film. Never had it happen before, but only one survived. The other sort of disintegrated and couldn't be saved. Ah well, a bit if dust and it won't show. I think...

In the end, i'm not entirely happy with it, but not very disappointed either

So, this is how the little armoured car stands now. The wheels are still loose, the groudwork is unpainted but primed
(which actually looks cool) 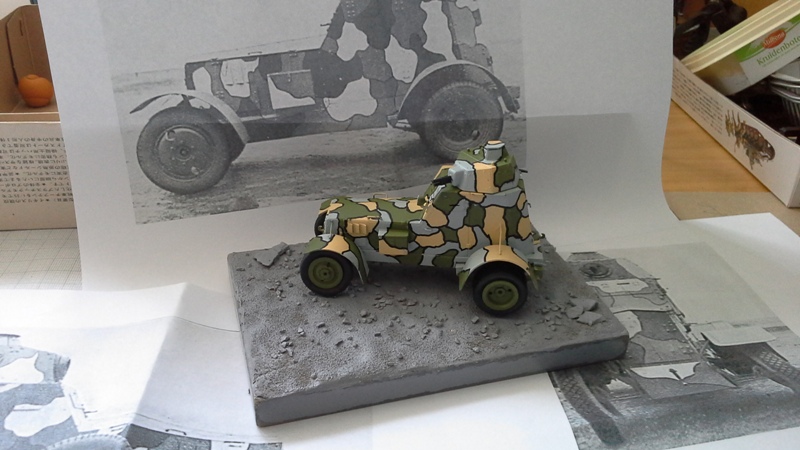 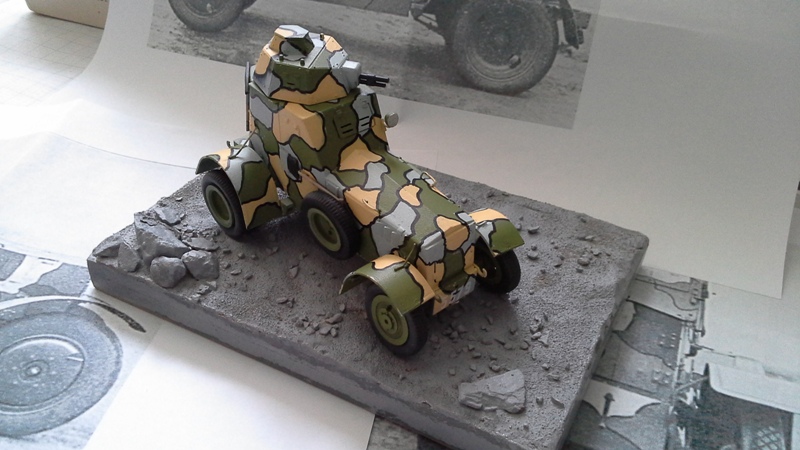 And yes: no brown. I read on the Wz. 34 page that the pattern likely consisted of yellow, green and light blue-grey. On the linked page it looked like the camouflage colors used by the French, so i bought those colors and went with it. It looks nice and different

Next up is a light dusting. Then finish the groundwork and the figures. The figures are actually still in black primer. I don't know if all will be done when the campaign ends, but i'm confident the little armoured car is!!

REPLY & QUOTE
Namabiiru (Mark C.) said
That is a nice-looking little car! A bit of weathering will really make it stand out.

REPLY & QUOTE
Namabiiru (Mark C.) said
That looks fantastic, Ken! Have you thought about maybe running a red LED up under the fire?

REPLY & QUOTE
69mudbone (Ken Henderson) said
Thanks Mark, maybe sometime in the future.... I'm trying to say above water in these campaigns.

REPLY & QUOTE
Namabiiru (Mark C.) said
Yeah, I know the feeling. I was doing pretty well so far this year, but I don't see me doing any modeling any time soon with all the work to do on the new house.

Looks as though we're down to just under two weeks left for this campaign. Everyone going to make it?

REPLY & QUOTE
JSSVIII (John S. Smith VIII) said
Nice build Lap Man, I have that kit in the stash, how is the build? I've been looking for something simple and fun for a break from other projects.

REPLY & QUOTE
ayovtshev (Angel Yovtchev) said
I see there are less than 12 days till this campaign ends.

I finished some builds recently and while I have a scratchbuild project underway, I was thinking of some OOB project to diversify.

This is my starting picture: Spendid job with the camo,Goof!
I've done such camo on a Bulgarian Vickers E/Mk.B, so I know how demanding and time-consuming it is.

Yours is realy stunning!!!

Spendid job with the camo,Goof!
I've done such camo on a Bulgarian Vickers E/Mk.B,

so I know how demanding and time-consuming it is.

Yours is realy stunning!!!

I was pleased enough with it. Then i sprayed on some satin varnish and it looks like a few of the lines ran out a bit. I mean, they sortof seemed to smudge. But it was decent enough. Weathering is usually hit-or-miss with me. Either it goes well or it messes up. In this case it messed up. And instead of sitting back a bit to decide for the next course of action, i went back at it. It basically went downhill from there. I'll post some picture later this week and probably call it done for this campaign. It'll stay on a shelve for a bit while i decide what to do with it. Respray, mud-up or perhaps a white-wash?
And honestly: i thought a little bit of understated dusting and that would be it. I should learn to stick with the plan The vehicle I use as a refference: REPLY & QUOTE
goofmuilwijk (Goof Muilwijk) said
That is it for this campaign, i'm calling it done: 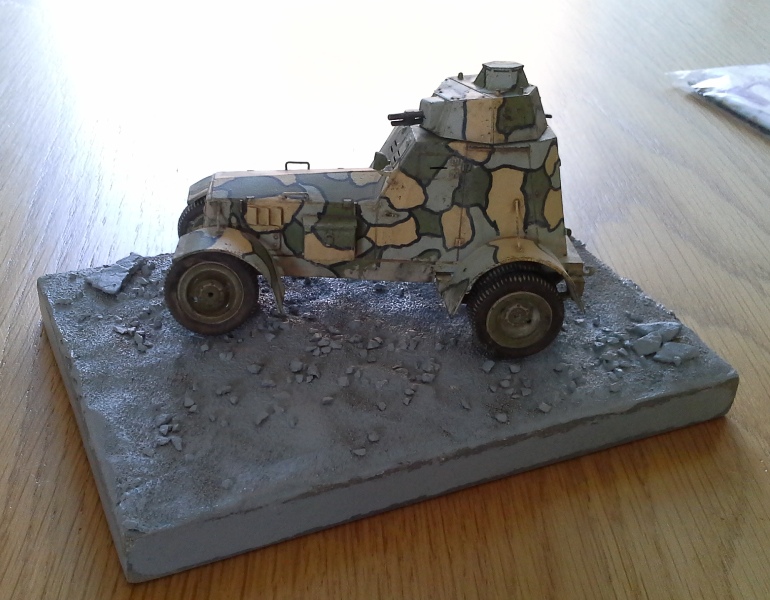 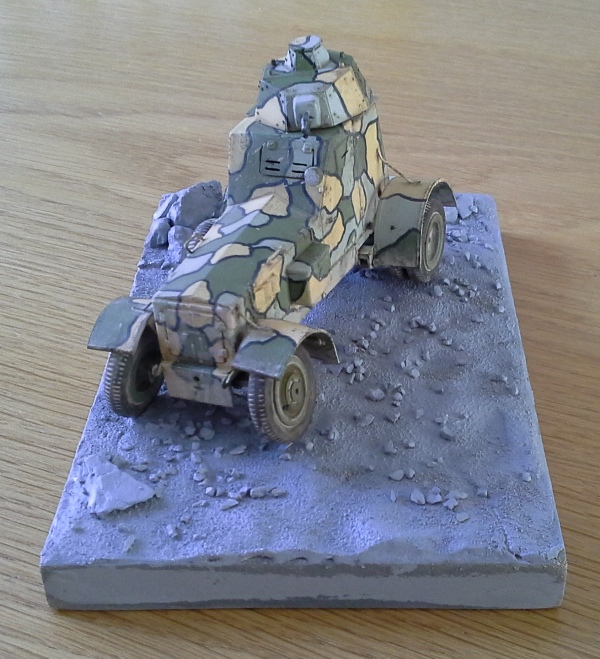 In retrospect, i would have used a smaller marker for the seperation lines. I thought it had dried as well, but the varnish made some of the lines on the turret smudge a bit. Not really sure what i would do about that, apart from wait another day or so?
As far as weathering is concerned, i should have stopped when the initial pinwash didn't flow right. Pausing to get some distance, so to speak. Then restart it the next day instead of just keep going.
The front wheels will need to be straightened out sometime in the future. The axle seems warped. Perhaps replace it with a metal rod.

For now it looks alright enough, i think. I'm not really sure how to proceed, but that's for a later date. The figures still needs painting anyways. The base looks cool (i think

) in fifty shades of grey. I'll probably keep it that way for a bit.
I am not really happy with the way my little Wz turned out, but all in all it was a nice kit to build.

Anyways: thanks for an enjoyable campaign. I've seen some really nice builds and some cool kits. It is really great to see so many builds that are off the beaten path

Goof- glad you like my tarp!
I changed the tarp material from napkin to shoe wrapping paper and I' m quite happy with both the result and the availability, that I-thanks to my GF obsession with shoes- have at hand

Your finished model looks cool!
Next time you can avoid the "running" problems with thin black lines by handpainting them with acrylic black paint and fine(5/0 or 10/0) brush.That's what I did on my Vickers E Mk.B It was fun participating,